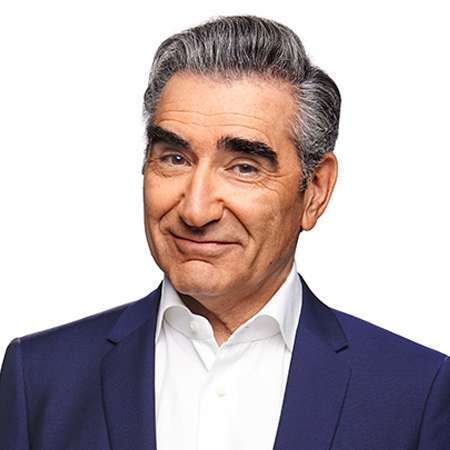 Eugene Levy is best known for his character as Noah Levenstein in the blockbuster movie American Pie. His role in the movie earned him both name and fame. He is also a renowned Comedian, Director, Musician, Producer, and writer. He is also mostly known for his performance in several movies like Bringing Down the House, Cheaper By the Dozen 2, and Father of the Bride Part II. Most recently his celebration with son Dan Levy in the hit series Schitt's Creek gave him his first Primetime Emmy Award in the lead actor.

Eugene Levy was born on December 17, 1946, in Hamilton, Ontario to a Jewish family. His mother was a housewife and his father work as a foreman at an automobile plant. His nationality is Canadian.

He was awarded Governor General's Performing Arts Award which is Canada's highest honor in the performing arts, in the year 2008. He was also appointed to the Order of Canada on June 30, 2011. Levy is also an outspoken advocate of autism awareness and treatment.

Levy did his schooling from the Westdale Secondary School. After that, he attended McMaster University, where he was a president of the McMaster Film Board which is a student film group.

Levy began his career on the well known late-night comic drama series on SCTV in the year 1976, where he won two Emmy Awards for writing. His initial movies include Splash released in 1984, Club Paradise in 1986, Armed and Dangerous in 1986, and Multiplicity in 1996.

It was the year 1999 where Levy's acting career took a particular turning point where he was as a loving but clueless dad in the blockbuster American Pie. Levy once stated that American Pie gave him a new perspective on his career. Eugene Levy has shown up in more than fifty movies, seven of which have topped the one hundred million dollar mark.

Levy's most successful films include Bringing Down the House, Father of the Bride Part II, Cheaper by the Dozen 2, and Over the Hedge, these films have built up to him as one of Hollywood's most well-known comedian actor. Levy is also critically acclaimed for co-starring and co-writing Best in Show, Waiting for Guffman, For Your Consideration, and A Mighty Wind.

His work in A Mighty Wind gave him a Grammy Award and a New York Film Critics Circle Award, alongside a Golden Globe selection for Best in Show. The actor has a net worth of $15 million. He is still working and surprising his fans with his work.

He has been playing the role of Johnny Rose in the series Schitt's Creek, alongside Annie Murphy and Catherine O'Hara, since 2015.

Eugene Levy has earned a tremendous amount of money from his career. The actor has an estimated net worth of $18 million, as of 2018, according to celebrity net worth. He earned $1 million for his marvelous performance in the box office hit movie American Pie 2. He also received a hefty pay cheque of $3 million from the movie American Reunion in the year 2012.

A 2001 American sex comedy American Pie 2 became the instant hist at the box office grossing more than $287.5 million against its production cost of $30 million. He played the role in the movie alongside Jason Biggs, Shannon Elizabeth, Allyson Hannigan, and Chris Klein.

Eugene Levy and his wife Daniel have also worked together in several projects like CBC Television sitcom Schitt’s Creek, is a comedy show made by Eugene and his son Dan.

They have been doing off-screen. Levy and his son Dan are known for having an exceptionally solid father-child relationship. They are more similar to companions than father and son. Currently, Daniel is not as acclaimed as his dad but everyone will realize that he is very talented and hard-working. Not only with his son but Levy is very much attached to his wife and daughter.