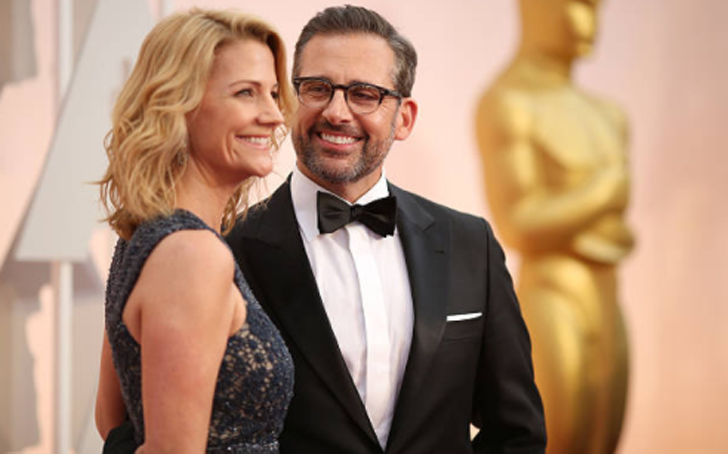 "A successful married life requires falling in love several times but with the same person." Actor and comedian Steve Carell and his actress and writer wife Nancy Carell are the best examples.

Married for over two decades, Steve and Nancy are still madly in love. They tied the knot in 1995 and are blessed with two children.

Despicable Me Star Steve Carell And His Wife Nancy Carell Happily Married Since 1995: How It All Started?

Steve Carell and Nancy Carell first met at Second City in Chicago. At the time, the former was an improv teacher whereas the latter was one of his students.

Nancy is Saturday Night Live alumnus. She also worked together with husband Steve as a correspondent on The Daily Show and the pair also performed together in several movies and TV series including The Office.

Recalling the past, the 55-year-old actor confessed that they both were shy to ask on the date for each other. He explained in an interview in 2013:

Steve and Nancy eventually tied the knot on 5th August 1995. The duo welcomed their first child;  a daughter, Elisabeth Anne Carell in May 2001. Nancy then gave birth to their second child, a son John Carell in 2004.

Foxcatcher star is a proud dad. For him, his career completely changed after the arrival of their daughter. He explained:

"I'll never forget the first audition after my daughter was born. I nailed it because I didn't care any more. Before that I hadn't had great success auditioning for TV shows, it was spotty at best but for that audition, it wasn't a life or death thing."

The father of two added:

"All I wanted to do was get home to my baby and it changed my perspective on my career and on the world, on who I was. The world was so much bigger than me, or any of my concerns and so much richer too. Having children is by far the most important and best thing that we ever did."

Also, the Oscar-nominated actor further explained that his children are proud of him. Steve is indeed a family man.

Steve and his wife broke up on their 17th wedding anniversary, but don't worry guys it was only onscreen. In dramedy Seeking a Friend for the End of the World, the couple who portrayed as a married couple gets the divorce. The separation was only for the movie as their bonding, in reality, is stronger as ever.

They not only appeared together on screen but also created a comedy series Angie Tribeca starring Rashida Jones and Hayes MacArthur. Steve and Nancy are indeed Hollywood's one of the power couples.

The pair resides in Los Angeles at present. They usually spend their vacation in Marshfield Hills, a torn in Plymouth County, Massachusetts along with their children.

Carell seems to be quite busy at present as he has hands full of works. The actor who made his acting debut from Curly Sue in 1991 is busy in a comedy-drama, She Came to Me alongside Nicole Kidman and Amy Schumer at present.

His other projects like The Women of Marwen alongside Eiza González and Leslie Mann and Backseat alongside Sam Rockwell, Amy Adams, and Christian Bale are in post-production.

In addition to the list, his upcoming drama Beautiful Boy is all set to release in October 2018. He starred in the drama alongside Timothée Chalamet and Maura Tierney. As per some gossipmongers, Carell will also appear in 2019 project, Minecraft: The Movie.

Carell last appeared in the 2017 comedy-drama film Last Flag Flying alongside Bryan Cranston and Laurence Fishburne. He was praised for his performance as tennis star Robert Larimore Riggs the biographical comedy-drama Battle of the Sexes alongside Emma Stone who portrayed the role of Billie Jean King.