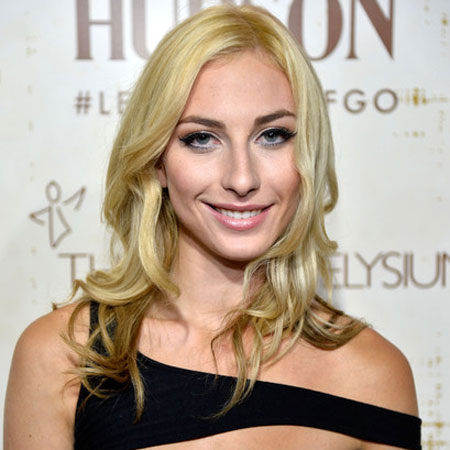 Born and raised in Los Angeles, California, Cody Kennedy is an American model and actress. She is best known for her performance in  2015 movie, Memoria where she portrayed the role of Natasha Illichev, the dark object of the desire. Kennedy has featured in music videos of popular singers including Justin Timberlake, Miley Cyrus, and Steve Aoki. Kennedy is possibly single at present.

Cody Kennedy was born Cody Catherine Kennedy on December 9, 1991, in Los Angeles, California, USA. She is American and belongs to the mixed ethnicity of Russian, Swedish and Irish.

Kennedy is the third child of her parents and has three sisters, Chris Kennedy, Cory Kennedy, and Chandler Kennedy.  All Kennedy sisters have the same initials as well as boys' names.

In 2010, Cody Kennedy graduated from  Santa Monica High School from where many notable celebs also completed their education such as Sean Penn, Robert Downey Jr., and Charlie Sheen. She is a graduate of the University of Southern California (USC).

Kennedy attended  UCLA for sitcom acting along with Conchata Ferrell, Scott Sedita, Howard Storm, and Chuck Lorre. During UCLA, she was an alumna speaker for the US Performing Arts Program.

Kennedy went to the Groundlings theatre which is one of the renowned acting theater for improvisation and sketch comedy.

Cody Kennedy had a keen interest in modeling and also worked for many well-known modeling agencies. She made acting debut at the age of 2 as a baby model. During her teens, Kennedy performed in music videos of several artists like Justin Timberlake, Miley Cyrus, and Steve Aoki. She was handpicked by David Fincher and Brett Ratner for their projects.

Later, Kennedy transitioned from music videos to TV ads and magazines, appearing in the Janusz Kaminski directorial Sears commercial. In 2008, she featured in the  October Issue as Nylon Magazine's "It Girl."

In 2008, she debuted on TV with a guest role in Disney Channel's The Suite Life on Deck. She portrayed the character of  Sasha Matryoshka, Junior Chess Champion of Russia. Later she appeared in different series like, CSI: NY, The Muppets, Super Fun Night, Madden Girl, and This is Fashion.

Once in an interview, she talked about her on-screen role,

"I love to bring something new to every character that I play. Every character has a different story to tell and I tend to usually like to play characters that are not black or white, but some shade of gray."

In 2009, she hosted the Young Hollywood Shows for Boxeight LA Fashion Week. Kennedy auditioned for the supporting role of Rachel in 2012 film, The Bridge Between but landed the lead role of Allison Michaels.

In 2015, she shared the screen with James Franco and Thomas Mann in Memoria. The movie did an average job at the box office, but she received critical acclamation for her role as Natasha Illichev who has the desire for dark objects.

Kennedy played the recurring role in the Vimeo drama series, Beautiful Fools as well as she starred in the Golden Globe-nominated HULU original comedy, Casual (2015). She also is known for her appearance as a reality star in A&E's Gene Simmons: Family Jewels.

She made her appearance in the seventh season on the TNT's hit crime drama, Rizzoli & Isles as the quick-witted, Mary Henderson. Her most recent release was Anchor Bay's horror comedy, Fog City (2017). She is one of the casts of the first season of Marvel's newest action drama, Runaways (2017).

Cody Kennedy earned an impressive sum from her acting career, but the official figure is yet to be made public. As per some online sources, her net worth is in seven-digit figures.

She earned a handsome amount from movies and TV series. In 2015, she was part of the TV series, Casual which received 7.8 stars from IMDb out of the 10. Similarly, Memoria earned 5 stars.

The actress has a house in Los Angeles. Although the financial detail of the house is yet to be revealed, the medium price of a mansion in LA is over $880k.

Cordy Kennedy is unmarried. She is quite ambitious and dedicated towards her career which might be the reason she favors to be single. She has always maintained a low-key personal life and rarely uses social media.

As of now, the actress in a romantic relationship with her unknown boyfriend. Judging by her social media, the couple much in love. She has posted a number of beautiful pictures on her Instagram account.

Some online sources claimed she had a romantic affair with the photographer, Drik Mai but no official confirmation has come about it. Previously, she was also linked to celebrities like Carter Jenkins, Nick Simmons, and Mitchel Musso but all turned out to be fake news. In 2014, rumors flew about Kennedy's alleged affair with Sam Heughan.

Kennedy is nicknamed Commander of Gene Simmons in reference to the band Commander Cody and His Lost Planet Airmen. Her favorite actresses are  Allison Janney, Lisa Kudrow, Catherine Keener, and Resse Witherspoon. She is also a fan of Billie Holiday, Frank Sinatra and Ella Fitzgerald.

Kennedy also established the print and runway model. Her one of the most favorite movie was 1985 commercially successful movie,  Back to the Future. She said, the movie brings a smile on her face and she enjoys watching it.

Kennedy is a five-time All-Star softball player and played pitcher and shortstop positions. In August 2012, she was named "Men's Humor Hottie".

Kennedy spent her childhood in the same apartment on Holloway Drive in West Hollywood where Shelley Winters and Marilyn Monroe shared rooms in 1951.

The actress is currently resdies in Los Angeles California.

Cody Kennedy shared her thoughts on The Rolling Stones & Time Travel. Check out the video below,