Alexa Davalos Dunas aka Alexa Davalos is an American actress. The actress gained her fame from the television series Angel.

Her other successful TV series include Reunion, Mob City, and The Man in the High Castle. Furthermore, she worked in movies like The Chronicles of Riddick, The Mist, and Clash of the Titans.

What Is Alexa Davalos' Age?

Alexa Davalos Dunas was born on 28th May 1982 in Paris, France. She belongs to mixed ethnicity and holds the American nationality. As of May 2022, she is 40 years old and she stands at an average height of 5 feet 8 inches or 173 cm.

Davalos is the daughter of photographer father Jeff Dunas and actress mother Elyssa Davalos. She was raised in France and Italy in her childhood. Then finally settled in New York along with her family.

Alexa Dunas made her debut in 2002 as an actress on television in the series Undeclared. The same year, she made her first appearance in the feature film Coastlines. The actress shared her screen with Vin Diesel, Thandie Newton, and Karl Urban in the 2004 science fiction movie The Chronicles of Riddick.

The actress got her first major role in the television series Reunion sharing screen along with Will Estes, Chyler Leigh, and Amanda Righetti from 2005 to 2006. Later the actress appeared in Feast of Love, The Mist, and Defiance. 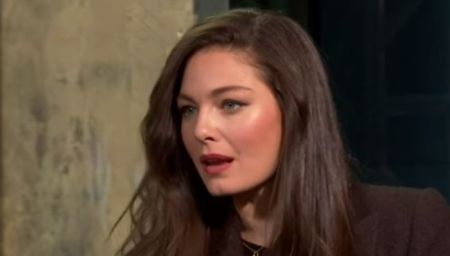 The actress last appeared in the 2010 movie Clash of the Titans with Sam Worthington, Gemma Arterton, and Mads Mikkelsen.

She appeared on a small screen with a major role along with Rupert Evans, Luke Kleintank, and Joel de la Fuente in the series The Man in the High Castle from 2015 to 2019. In 2019, she appeared in Marvel's comic television adaptation The Punisher.

Net Worth From Her Career

Alexa Davalos has been working in the Hollywood entertainment industry since 2002. According to celebrity net worth, he has an estimated net worth of $4 million, as of 2022.

Davalos' major portion of her salary is from her acting career. She has not revealed any salary information to the general public. However, the average salary of a Hollywood actor and actress is around $50,000 per annum.

The actress appeared in many movies that collected a good amount of box-office here are some of her movies with box-office.

Alexa Davalos is married to actor Josh Stewart. Alexa and her husband dated for some time and exchanged wedding vows on 19th May 2019. The couple even appeared in the television series The Punisher.

The 38-year-old actress living a blissfully happy married life along with her husband. As of now, the duo does not have a kid.

The actress is available on social media to interact with her fans. She has 106k followers on her Instagram and 20.8k followers on Twitter.

Being pretty much active on social platforms, the 'Clash of the Titans' alum makes an impressive sum through her promoting and endorsing various products and brands. According to Influencer Marketing Hub, she earns $315 to $525 per sponsor post with an engagement rate of 1.20%.