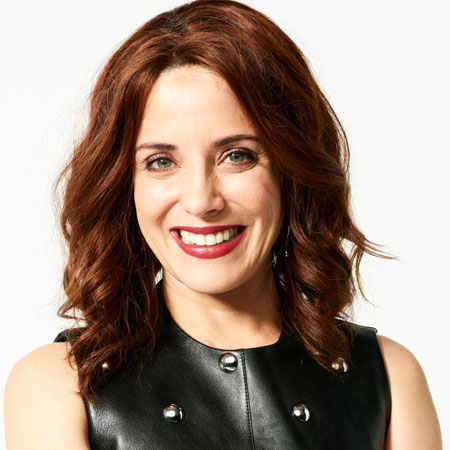 Mexican-American actress Alanna Ubach is well recognized for her roles in both Oscar-winning animated movies Coco and Rango. She is also popular for voicing several animated TV shows and movies including The SpectacularSpider-Man, El Tiger: The Adventures of Manny Rivera, and Brandy Mr. Whiskers among others.

Ubach made her big screen debut in 1990 from the short movie, The Blue Men and later appeared as Gloria in the movie, Airborne. In 2008, she starred and narrated a one-woman show called Patriotic Bitch. She also sang a haunting version of La Llorona in the movie, Coco.

She is a married woman. She tied the knot to Thomas Russo Jr. and the couple welcomed their first child in 2017.

Alanna Ubach was born Alanna Noel Ubach on 3rd October 1975 in Dowey, California under the birth sign Libra. Ubach holds both Mexican and American nationality and belongs to Puerto Rican and Mexican descent.

Ubach is the daughter of Sidna and Rodolfo Ubach. She has a sister, Athena Ubach (a therapist). She was interested in acting from an early age and learned both acting and dance. She made her acting debut at the age of seven form the TV series Romper Room.

She studied at USC (University of Southern California) but dropped out only after the first semester. Later, she attended Lee Strasberg Institute in LA.

Alanna Ubach acted in the play, Kindertransport at the Manhattan Theater Club at the age of 14. In 2008, she narrated and starred the one-woman show, Patriotic Bitch at the Clurman Theater in Theater Row.

Ubach then worked in several movies, Hits!, The Brandy Bunch Movie, Freeway, Johns, All of It, Blue Moon, The Perfect You, Equal Opportunity, A Haunted House, and Being Us. In 2008, she voiced Dander in Batman: Gotham Knight. She shared the screen with Kevin Conroy, Gary Dourdan, Jason Marsden, and Corey Burton.

CAPTION: Alanna with Reese Witherspoon & Jessica Cauffiel in one of the scenes of Legally Blonde. SOURCE: bravotv.com

Ubach sang a haunting version of La Llorona in the movie, Coco.

Ubach made her TV debut in 1992 from TV film, Moment of Truth: Why My Daughter? directed by Chuck Bowman. The same year, she made her breakthrough role in Beakman’s World as Josie. She was even nominated for Young Artist Awards for her performance.

As of 2018, Ubach appeared as Jo Hernandez-Frumpkis in Girlfriends’ Guide to Divorce and voiced Ansi Molina in Welcome to the Wayne.

Alanna Ubach has an estimated net worth of $1.2 million as per some online sources, however, the amount is still under review.

Ubach has worked in several movies that made a good collection at the box office which include:

Alanna Ubach is a married woman. She tied the knot to Thomas Russo Jr. The couple welcomed their first child, a son, Thomas Rodolfo Russo III on Tuesday, July 25, 2017, in Los Angeles at 9:56 a.m.

“Our little man is named after both our late fathers. We can’t get through the second verse of a nursery song without crying. The house is a water park at the moment, and we’re proud of it!”

The couple is together for years without any divorce rumors.

CAPTION: Alanna with her husband and child. SOURCE: people.com

Ubach has a tattoo of a half heart on her back.

Here is the video where Alanna Ubach talks about her role in the series, Girlfriend's Guide to Divorce: