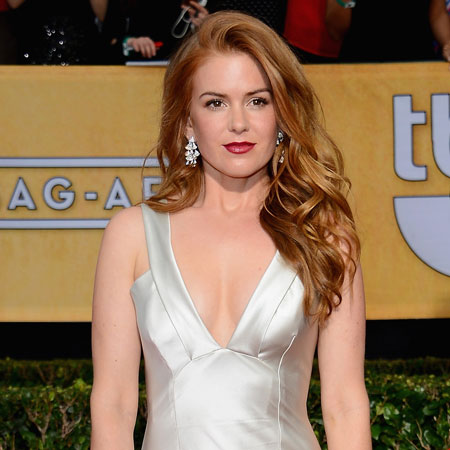 Born and raised in Muscat, Oman, Isla Lang Fisher is an Australian actress, author, and voice actress, well known for her appearance on the children's adventure series Bay Cove, and miniseries Paradise beach. She is also well recognized for her work in comedy roles in I Heart Huckabees, Scooby-Doo, Hot Rod, Wedding Crashers, Confessions of a Shopaholic, Rango, and Arrested Development.

Married to an English comedian Sacha Baron Cohen since 8 years, Fisher is living a happy life with her husband and three children.

Isla Fisher was born on 3rd Feb 1976, in Muscat, Oman to her Scottish parents Brian Fisher and Elspeth Reid. Her father worked as a banker for the United Nations. At the age of six Fisher and her family moved to Australia.

Before moving to Australia, the family first stayed in their hometown Bathgate, Scottland. According to Fisher, she was bought up in a 'very outdoorsy life' along with her four siblings.

Isla Fisher began her acting career at the age of 9 appearing on commercials before gaining roles in children's television show Bay City and Paradise Beach. At the age of eighteen, Fisher published two novels named Bewitched and Seduced by Fame, with the help of her mother.

In 2002, she made her appearance in the movie Scooby-Doo as Mary Jane. The following year, she played Kristy in the Australian comedy The Wannabes. After receiving positive reviews, Fisher was spotted by an American agent.

With a big role in the movie Wedding Crashers, along with co-artist Owen Wilson, and Vince Vaughn, her performance won her the Breakthrough Performance Award at MTV Movie Awards.

During an interview in 2005, Fisher admitted that she had not gained much success in acting she would have been a full-time writer. In 2007, Fisher portrayed in a thriller movie, The Lookout, co-starring with Hot Rod, Matthew Code, and Joseph Gordon-Levitt.

Fisher also appeared in the movie adaptation of the book Confessions of a Shopaholic which won her the third Teen Choice Award nominations, two for Wedding Crashers. She has also credited her voice for the character of Tooth in the animated film Rise of the Guardian.

Fisher will appear in Tag, a comedy movie written by Rob McKittrick and Mark Steilen, and directed by Jeff Tomsic. The movie will be released on 15 June 2018. Other casts in the movie include Ed Helms, Jeremy Renner, Hannibal Buress, Jake Johnson, Anabelle Wallis, Jon Hamm, Rashida Jones Leslie Bibb and Brian Dennehy.

Isla Fisher earns a decent amount of money from her career as an actress, author and voice actress. She also earns money from endorsements. She collaborated with a multimillion-dollar campaign for ING Direct. As of 2018, Fisher's total net worth is estimated to be $22 million.

With her husband, Fisher previously bought a 2800-square foot house in Hollywood Hills with three bathrooms, three bedrooms, and paid $2.45 million. Later the couple sold the house for $2.5 million, and bought a bigger mansion multi-acre estate on Mulholland Drive, with 10 bathrooms, 7 bedrooms, a detached screening room and a caretaker's house.

Fisher's husband also earns a heavy amount of money from his acting career. Currently, his total net worth is estimated to be $130 million.

Isla Fisher is a married woman. She met her husband Sacha Baron Cohn for the first time in 2002 during a party in Sydney, Australia. The couple dated for two years and got engaged, and married on 15 March 2010, in Paris.

Since their marriage, the couple shares two daughters together named Elula Cohn, Olive Cohn and a son named Montgomery Cohn.

Before Fisher was married to Cohn, she changed her religion to Judaism, as she said,

'' I will definitely have a Jewish wedding just to be with Sacha. I would do anything-movie into any religion-to be united in marriage with him, We have a future together and religion comes second to love as far we are concerned.''