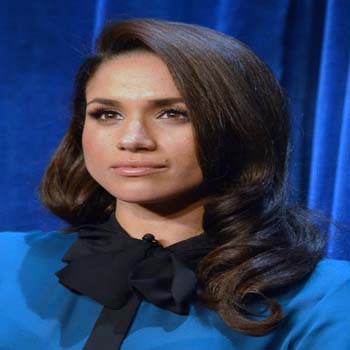 Meghan Markle, Her Royal Highness the Duchess of Sussex, is a member of the British royal family and a former Hollywood actress. She married Prince Harry, Duke of Sussex, on 19 May 2018 in St. George’s Chapel at Windsor Castle. Her husband, Prince Harry, is the youngest son of Prince Charles, Prince of Wales, and Princess Diana.

Markle is a former Hollywood actress who perhaps is best known for her appearance in a TV series Suits. She appeared in a drama for almost seven years from 2011-18.

A freelance calligrapher turned actress started off her acting career with a minor role of a nurse in an episode of the daytime drama show General Hospital in 2002. In 2011, she portrayed Jamie in a comedy film Horrible Bosses. Markle previously married to producer Trevor Engelson from 2011-13.

Markle was born on August 4, 1981, in Los Angeles, California, U.S. She holds an American nationality belonging to the mixed ethnicity. She is the daughter of Thomas Markle Sr. (her father) and Doria Radlan (her mother). She has a sister named Samantha Grant and a brother named Thomas Markle Jr. Markle's parents divorced when she was six years old.

Megan spent her childhood on the set of Married…With Children with her father- a retired lighting director. She attended Immaculate Heart High School- an all-girl Catholic private school in Los Angeles.

She went to Northwestern University and got a double major in Theatre and International Relations. She was the first one to graduate from her family. She is of British nationality and mixed ethnicity; Caucasian and Afro-American.

Marle started working for the US Emba s sy in Buenos Aires, after graduating from the college. She also worked as a freelance calligrapher. She is remembered for her act in General Hospital and Love Inc. She also gave a great act as Charlotte in Castle series. to work as an actor in an episode of soap opera General Hospital. Later, she appeared in some of the television episodes of Century City, Love, Inc., The War at Home,90210, Knight Rider, The Apostles, CSI: NY, The League, Castle, and Suits.

Markle has also made her appearances in several films like A Lot Like Love, The Candidate, Deceit, The Boys and Guide to Getting Down, Remember, Get him to the Greek, Dysfunctional Friend and Horrible Bosses.

In 2006, Markle made her appearance in Deal or No Deal. She also appeared as “mob” member and was interviewed once on an episode.

Markle has also appeared on Fringe as Junior Agent and portrayed Rachel Zane in 2011. In 2010, she appeared in two films, Get Him to the Greek and Remember Me. In 2011, she showed up in Horrible Bosses. She also contributed to the film, The Candidate in 2012.

Former Hollywood actress Meghan Markle made international headlines when her royal affair revealed in 2016. Markle and Prince Harry met while Harry was attending the Invictus Games in Toronto, where suits filmed.

After their first meeting, media speculated about their romance, with Markle becoming the most Googled actress of 2016 due to her royal relationship with the royal prince. In November 2017, Markle and Prince Harry’s secret engagement revealed which was organized in the early November.

After few weeks, Kensington Palace announced that the royal wedding would take place on May 19, 2018, in St. George Chapel at Windsor Castle. In January 2018, she deactivated her Facebook, Twitter and Instagram.

On May 19, 2018, the couple married at St. George Chapel at Windsor Castle. Shortly before their wedding, Queen Elizabeth granted Meghan with the title of Meghan, Her Royal Highness the Duchess of Sussex. Markle’s father Thomas Markle sr. did not attend the royal wedding due to he did not want to embarra s s the royal family or his daughter.

Markle’s husband, Prince Harry (the Duke of Sussex) is the sixth in the line of British throne after his nephew Prince Louis of Cambridge- the youngest son of Harry’s brother Prince William and Kate Middleton.

Prince Harry is the second son of Prince Charles and Princess Diana, Princess of Wales. He is a grandson of Queen Elizabeth- the current president of the monarch.

Meghan Markle's net worth is $6.6 million at present. She is earning a considerable amount of salary from her work as she takes $44k per episode. She earned around $48 million per episode working on Suits, as she recorded over 100 episodes of Suits.

Her salary including her annual Suits salary and her brand endorsements was $440,000.

Markle is active on social networking sites like Instagram and Twitter and has a huge fan following on both of her accounts. Her fans can get recent updates about her activities from her accounts.

Meghan Markle is an American Fashion Model, Spokesmodel, and actor. She is best known for portraying Rachel Zane on the legal drama series, Suits. She is also known for her work as FBI special agent Amy Jessup in the sci-fi thriller, Fringe.

Her Zodiac sign is Leo. Her eye color is Brown, and her hair color is also brown. Her shoe size is seven and wiki feet rate her feet as ok feet. Her dress size is six.

Markle is of mixed race. Her father is Caucasian, and her mother is African-American ethnicity. Her mother has a master's degree in social work and works as a therapist and yoga instructor. Her father is Emmy Awards winner, whose profession as a lighting director resulted in his daughter spending many years as a child visiting the set of Married... with Children.

Talking about her relationship status, Markle met Trevor Engelson and started dating in 2004. She married Trevor on September 10, 2011, after having an affair for several years. They had a good relationship for several of years.

Unfortunately, the relationship did not last long. The couple separated in May 2013 and divorced in August 2013.