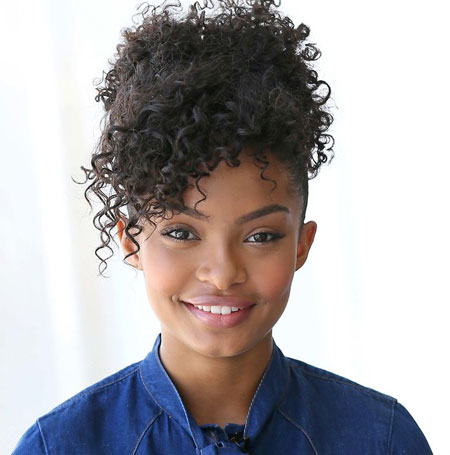 Yara Shahidi is an American actress and a model. She is well recognized for her roles in the sitcom, Black-ish and its spin-off series, Grown-ish as Zoey Johnson. She made her acting debut in 2007 from the TV series, Entourage. Two years later, she made her movie debut as Olivia Danielson in the movie, Imagine That.

In 2015, she won NAACP Image Awards and  BET Awards in 2017 for her performance in the TV series, Black-ish.

Yara Shahidi was born Yara Sayeh Shahidi on 10th February 2000 in Minneapolis, Minnesota under the birth sign Aquarius. Shahidi is American by nationality and as far as her ethnicity is concerned, she is Mixed (half African-American and half Iranian descent).

In the Persian language, her first name means, ‘’someone who is capable to do something, or someone is so strong and clever to do something hard.’’ She is the daughter of African-American mother, Keri Salter Shahidi and Iranian-American father, Afshin Shahidi (a photographer). She has two younger brothers, Sayeed Shahidi (a child actor) and Ehsan Shahidi.

At the age of 4, she along with her family moved to California for her father’s work.

From the early age of 6, she appeared in several commercials for  McDonald's, Ralph  Lauren, Target, GapKids, Disney, Guess Kids and The Children's Place. She also used to work with her younger brother and mother in several broadcast and print campaigns.

In March 2018 on the show Jimmy Kimmel Live!, she announced that she wants to study social studies at Harvard University and is trying to manage her busy schedule.

Yara Shahidi made her Hollywood debut in 2007 from the HBO’s comedy-drama TV series, Entourage. Two years later, Shahidi worked in ABC sitcom, In the Motherhood created by Alexandra Rushfield and Jennifer Konner.

The same year, she shared the screen with Selena Gomez, David Henrie, Jake T. Austin and Jennifer Stone in Wizards of Waverly Place. Some of her other works include Lie to Me, The Cape, Family Guy, Rip City, The Finder, and Scandal. Particularly she is famous for:

As of 2018, Shahidi is working as Zoey Johson in Black-ish and in its spinoff series, Grown-ish.

Shahidi made her movie debut in 2009 from the comedy film, Imagine That. She appeared in the movie with Eddie Murphy, Thomas Haden Chruch, and Nicole Ari. Back to back, she worked in Salt, Unthinkable, Butter and Alex Cross.

Yara Shahidi has an estimated net worth of $1 million. Her 2010’s movie, Salt earned $293.5 million at the box office which was made under the budget of $110 million. IMDB rated the movie 6.4 stars out of 10. She shared the screen with Angelina Jolie, Live Schreiber, Chiwetel Ejiofor and Daniel Olbrychski.

The average salary for a TV star ranges between $150k-$1 million.

Yara Shahidi is possibly single. As of 2018, the actress busy with her busy schedule has not introduced anyone as her boyfriend.

Shahidi is close to the cast members of grow-ish, especially with Rowan Blanchard. She is also close to her family with whom she often goes on vacations and outings.

She is the second cousin of rapper Nas.

Here is the video revealing five facts about Yara Shahidi: