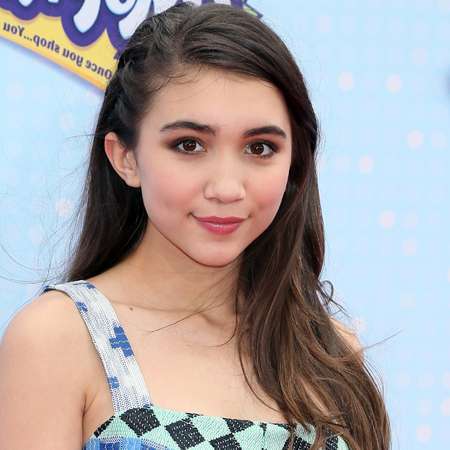 Rowan Blanchard is an American actress best known for her role as Riley Matthews on Disney Channel series Girl Meets World. She is also mostly known for her work on The Goldbergs. For her breathtaking performance, she was nominated for several prestigious accolades like Young Artist Awards and Teen Choice Awards. Her other successful projects are Best Friends Whenever and Spy Kids: All the Time in the World.

Rowan Blanchard was born on October 14, 2001. At the age of 14, Rowan is already mature for her age, her performance on set and tweets regarding emerging matters prove so.

Rowan Blanchard was born in Los Angeles, California. Her parents, Elizabeth and Mark Blanchard-Boulbol, are yoga instructors. Her paternal grandfather was an immigrant from the Middle East and her paternal grandmother's ancestors are from England, Denmark, and Sweden. Also having an Armenian ancestry, she is a girl who has diverse ethnic backgrounds and qualities. She has two younger siblings Carmen and Shane Blanchard. She also has a dog named Winston.

Rowan Blanchard also starred in “Spy Kids: All the Time in the World” as Rebecca Wilson and “The Back-Up Plan” as a 7-year-old kid.

Blanchard's acting career began at the age of five. She got her first major role in 2010 in a movie called “The Back-Up Plan”. In the movie, Rowan plays the role of Mona’seven-year-oldld daughter. In the same year, she was also in the main cast of Disney Junior Original Series Dance-A-Lot Robot. She got the role of a girl named Caitlin.

In 2011, Blanchard was in the cast of “Spy Kids: All the Time in the World” as Rebecca Wilson, one of the twin stepchildren Wilbur (played by Joel McHale). She also got the role of Raquel Pacheco in the movie “Little in Common”.

In Late January 2013, Blanchard got the role of Riley Matthews in the Disney Channel series Girl Meets World, a sequel to Boy Meets World. The titular character is the protagonist of the show and is the daughter of Cory and Topanga from Boy Meets World. She is also one of the singers of the title song along with co-star Sabrina Carpenter, who plays Riley’s best friend Maya Hart. She is an active member of Disney Channel Circle of Stars.

In 2015, she was cast in the ninth episode of the first season of the show “Best Friends Whenever”, again as Riley Matthews. In the same year, she also got the role of Cleo Eastman in Disney Channel Original Movie, Invisible Sister. Her character is an introvert, sarcastic and cynical teen girl who is always living in the shadow of her popular older sister, Molly.

Rowan Blanchard's Net Worth And Salary

Rowan Blanchard at such a young age has played many major roles in a number of successful projects. As per some authorized sources, her net worth can be believed to be over $2 million. She was also paid $210 thousand dollars for the first season of the Disney Channel's "Girl Meets World" and makes $10000 per episode.

In 2011, the actress played the role in the 4D spy adventure comedy Spy Kids: All the Time in the World which became the instant hit at the box office grossing over$85.6 million against its producing cost of $27 million. In the movie, she shared the screen alongside Jessica Alba, Joel McHale, Alexa Vega, and many others.

Rowan Blanchard is not married yet but it has been reported that the actress is dating YouTuber Owen Lang for a few months. The couple started dating in May 2018. She along with her boyfriend often posts beautiful pictures on her successful Instagram account.

Blanchard is quite busy on social media especially on her Instagram account where she has over 5 million followers.

Rowan Blanchard has also a pa s sion for humanity. At the age of just 14, she is already an outspoken activist in areas such as feminism, human rights, and gun violence. She mostly expresses her opinions on these matters through social media, especially Twitter and Tumblr. However, she has also spoken at the UN Women and US National Committee's annual conference as part of #TeamHeForShe, a feminist campaign.