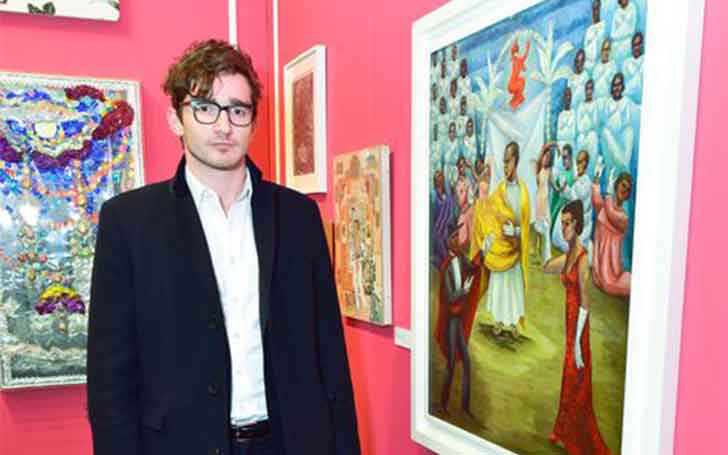 Following the engagement news of the celebrated Hollywood singer Ellie Goulding, fans are curious about her fiance Caspar Jopling.

Who is Caspar Jopling who managed to win the heart of the gorgeous singer Goulding?  Here we have listed five facts about him.

Ellie Goulding started her relationship with an Englishman Caspar Jopling in April 2017. The couple was coy about their affair and never actually confirmed them dating until their engagement announcement.

The lovebirds took their relationship to the next level when Goulding announced her engagement with her boyfriend of 18 months through The Times magazine. The news read,

The engagement is announced between Caspar, son of The Hon Nicholas Jopling of Yorkshire and Mrs Jayne Warde-Aldam of Yorkshire, and Elena, daughter of Mr Arthur Goulding of Hertfordshire and Mrs Tracey Sumner of West Midlands.

Jopling is a very sweet partner for his fiancee, whom he prefers to call by her real name Elena. The couple currently lives together at their New York Soho apartment. Here is a sweet message by Jopling for his future wife Goulding,

I get to spend the rest of my life with this truly extraordinary and beautiful, beautiful person. No one has ever made me feel more full of life, knowledge, happiness, or love. Hope, passion, confidence, and more love. There is no one I have ever been more complete with and there is no one I will ever feel more complete with. I look forward to a lifetime of exploring the world together, crying with laughter at stupid jokes, chatting into the early hours of the morning about art, music, the world, and the future. I love you Elena. And thank you to all of you that have sent such loving messages today

With all the cute little things, they are giving us some major couple goals.

Caspar Jopling is a son of Yorkshire landowner Honourable Nicholas Jopling and Jayne Warde-Aldam. However, his parents got divorced and his mother is married and is living with her second husband.

His grandfather Michael Jopling served as a Deputy Lieutenant of North Yorkshire. His uncle Jay Jopling is a wealthy art dealer and a popular gallerist who founded the White Cube art gallery.

3. Caspar Jopling Grew Up With The British Royals

As a son of a Yorkshire landowner, Jopling has had an amazing childhood and schooling. The handsome Englishman went to the prestigious school of U.K., Eton College, the same school Prince Harry and Prince William went to. His childhood was similar to that of a prince with all the luxury.

Other than that, Jopling is friend with Princess Eugenie of York. Looks like the princess is also a good friend to Goulding as she was seen hanging out with Goulding and Jopling at a Brooklyn Nets game. As per some sources, Princess Eugenie is the one who set the date between Jopling and Goulding.

After graduating from the reputable Eton College, Caspar Jopling attended Harvard University from where he graduated with the History of Art and Architecture. Thus, he has a great knowledge of art and architecture.

Following his graduation, the 6 feet 2 inches tall smart gentleman Caspar knows how to lead a successful professional life along with a blissful personal life. Apart from his college degree, he is an expert on handling every little affair of life.

Jopling works in the contemporary art department of the auction house Sotheby's New York office. Since is highly interested in art, he is aspiring to be a great art dealer.

The 26 years old art dealer is following the footsteps of his uncle Jay Jopling. So far, he is doing an amazing job in the art business. Jopling is blessed to make an incredible amount of money from his dream profession.