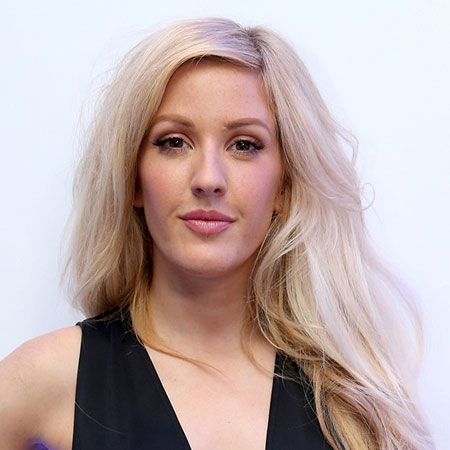 Ellie Goulding is an English singer as well as a songwriter who gained recognition from the song 'Love Me Like You Do.'  She is also known as the second artist to top the BBC's annual Sound of... poll.

Goulding is the winner of four 'BMI London Awards' and two 'Brit Awards' among other accolades.

Ellie Goulding was born as Elena Jane Goulding on December 30, 1986, in Hereford, England. She belongs to white ethnicity and holds an England nationality.

Goulding was born to mother, Tracy Goulding, who previously worked at a supermarket and father Arthur Goulding, who came from a family of undertakers.

Her parents got separated when Goulding was five years and later stayed with her stepfather, who was previously a lorry driver. She always considered her stepfather as 'horrible.'

Goulding grew up with her brother, Alex Goulding and two sisters, Jordan Goulding & Isabel Goulding in Lyonshall in a small village near Kington, Herefordshire.

At the early age of nine, Goulding began playing clarinet, and at the age of fourteen, she started learning guitar. Goulding did her schooling from the Lady Hawkins' High School. During the time, she played the character of the Scarecrow in a school production of The Wizard of Oz.

When she was studying at Hereford Sixth Form College, Goulding entered a singing competition and also became a winner. She attended the University of Kent. At that time, Goulding wrote her first song,“Wish I Stayed.”

Ellie Goulding began her career with her debut single 'Under the Sheets’ in July 2009. Later in March 2010, she released her debut album, Lights, which reached number one on UK Albums Chart and number six on the Irish Albums Chart.

Moreover, she performed at the 2015 AFL Grand Final with Canadian musician as well as singer Bryan Adams, and American musician Chris Isaak.

Goulding took a break from her music career and made a comeback performance at the opening of the 16th edition of Mawazine Festival.

At the festival, Goulding sang her recent single 'First Time' featuring Kygo, which released on 28 April 2017.

Ellie Goulding is unmarried yet, but she was in a relationship with a number of guys including musicians, actors, DJs, and even personal trainer.

Goulding had an affair with BBC Radio 1 DJ Greg James from 2009 to 2011. They even appeared together in various red carpets and other events.

Goulding has dated several other celebrities in between 2011 to 2016 such as Skrillex, Jeremy Irvine,  Ed Sheeran, Dougie Poynter, Luke Friend, Bobby Rich and much more.

The famous singer met singer, songwriter, record producer as well as one of the highest-paid DJ, Calvin Harris during the music video shoot for I Need Your Love.

They looked a perfect couple together, and nobody could deny their awesome chemistry. However, they never accepted their relationship in public.

During the start of her career, Goulding had anxiety and panic attacks. In 2010 her mental health deteriorated. Hence, she began doing exercise, kickboxing, and boxing as well to control anxiety.

In an interview in 2017, Goulding told that she still feels nervous while performing but now she can control it.

Goulding has done endorsements for brands such as John Lewis, Marks & Spencer and Pantene from where she earned a decent amount of money. Currently, her estimated net worth is $10 million.