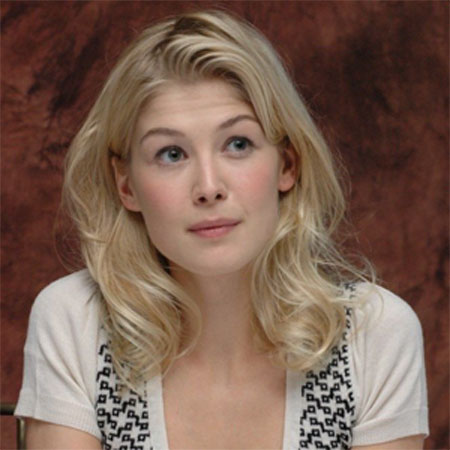 Born and raised in London, England, Rosamund Pike is an English actress, best known for her appearance in the stage production like Romeo and Juliet, and Skylight. She made her professional screen debut with the 1998 BBC TV film, A Rather English Marriage. Rosamund won the BIFA Award for Best Supporting Actress in 2004 for The Libertine. She earned critical acclimation for her performance in the psychological thriller film, Gone Girl and succeeded to earn an Oscar nomination.

Rosamund resides in Harlow, Essex, England along with her partner, Robie Uniacke and two sons.

Rosamund Pike was born Rosamund Mary Ellen Pike on January 27, 1979, in Hammersmith, London, England. She is the only child of opera singers Caroline Friend and Julian Pike. Her father also served as a music professor and head of operatic studies at the Birmingham Conservatoire.

Pike is Britsh and belongs to Caucasian ethnicity. She traveled across Europe until she was seven due to her parents' performance. She attended Badminton School in Bristol. Later, she appeared in a production of Romeo and Juliet at the National Youth Theatre. During that time she was noticed by an agent who embarked her professional career.

Rosamund Pike graduated from Wadham College, Oxford in English literature. Then she took a year gap in order to pursue her acting career. She gained stage experience appearing in several plays by Shakespeare,  David Hare's Skylight, Arthur Miller's All My Sons.  In 2001 she earned an Upper Second class degree.

Rosamund Pike started her acting career since her college days. She acted and directed various plays. She first appeared on TV in 1998 in Seven Days but her appearance goes uncredited. The same year, she got a major role in A Rather English Marriage.

She then appeared in several TV series like Wives and Daughters (1999), Love in a Cold Climate (2001),  Seven Days (1998). She debuted in Hollywood with 12th James Bond series, Die Another Day in 2002 for which she won Empire Awards for Best debut actress.

Pike shared the screen with Johnny Deep in The Libertine in 2004, which won her British Independent Film Awards for Best Supporting Actress. Some of her screen credit includes Doom, Pride & Prejudice, Made in Dagenham, Jackboots on Whitehall, Barney's Version, Johnny English Reborn,  Wrath of the Titans, Jack Reacher, and The World's End among others.

In 2014, she starred in David Fincher's directed thriller, Gone Girl opposite Ben Affleck. The movie was commercially successful and she received critical acclamation for her performance. She earned 22 nominations for her role, Amy Elliott Dunne out of which she secured 10 awards including British Independent Film Award, Saturn Awards, and Empire Awards among others.

In 2015, Pike lent her voice to the character Lady Penelope Creighton-Ward in the remake of Gerry Anderson's Thunderbirds Are Go. She also featured in the music video for Voodoo in My Blood.

In 2017, she appeared in The Man with the Iron Heart and Hostiles. As of 2018, she played the character of Brigitte Kuhlmann in Entebbe and will we appearing as Wilcox in Three Seconds. Her other upcoming movies include A Private War and Radioactive. In 2019, she will be voicing the character Moomonmamma in the animated series Moominvalley.

Some of her box office successful movies are

Rosamund Pike is in a romantic relationship with city businessman, Robie Uniacke. The duo started dating since 2009 and shares two sons, Solo Uniacke (born on May 6, 2012) and Atom Uniacke (born on December 2, 2014). The duo has a huge age gap of 18 years.

They are together for a long time but still, they are unmarried as Pike refers to marriage as an overrated thing.

Pike was 5-months pregnant with Solo when she was shooting for the movie, Jack Reacher. She returned to work after 4 months of her delivery and begin filming  The World's End (2013). Her partner, Uniacke is a father of 4 children from his two previous marriages.

She is a huge fan of Chinese culture so her boyfriend gave her a Chinese name ??? (pinyin: Péi Chúnhuá). Pike also requested to media to use her Chinese name in original form rather than the transliteration of her English name.

Currently, Pike lives a blissful married life in Harlow, Essex, England along with her boyfriend and two kids.

Previously, Pike was engaged to a director, Joe Wright whom she met on the sets of Pride & Prejudice in September 2007. Wright proposed her on Lake Como in Italy. The couple called off their engagement in June 2008 just before their scheduled date to marry. Even they bought a house in Spitalfields, East London. Pike also had sent 'save the date' cards to everyone.

Rosamund Pike also shared a romantic relationship with actor Simon Woods. The duo first encountered at the Oxford University while studying English Literature. The pair was together for two years before their break up. As per some online sources, the main reason for their split was Woods doubts about his sexuality.

In 2015, Pike signed an open letter for ONE Campaign as they collected signatures to address Angela Merkel and Nkosazana Dlamini-Zuma, urging them to focus on women welfare.

Pike also shares a good bonding with producer, Chelsea Clinton as both of them went to the same college.

Rosamund Pike talked about Breastfeeding on Ellen show. Let's check out the video,