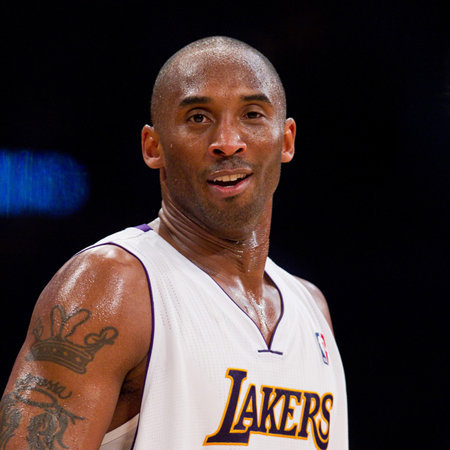 One of the best basketball players in the world, Kobe Bryant played his entire 20-year career with the Los Angeles Lakers of the National Basketball Association (NBA). He won several championships and awards from his career. In 2015, he retired from the playing career after winning several championships. Throughout his amazing career, he earned an eye-catching net worth and salary. He made a major portion of his wealth from the endorsement deals.

Bryant tied the knot to his longtime partner,  Vanessa Laine Bryant with whom he shares three children. The couple was together until his death on January 26, 2020, at 41.

Kobe Bryant was born Kobe Bean Bryant on 23rd of August, 1978 in Philadelphia Pennsylvania, United States of America. His parents named him after the famous beef of Kobe, Japan which they saw in the restaurant menu. Whereas, his middle name is derived from his father's nickname, Jellybean. Bryant belongs to the ethnicity black and holds American nationality.

Me and my big sis Shaya #nationalsiblingsday

Bryant was born as the youngest of three children to his parents, Joe Bryant (former NBA Player) and Pamela Cox Bryant. His parents raised him with his siblings, two sisters Shaya Bryant and Sharia Bryant in the Roman Catholic family.

Bryant started playing basketball from the early age of 3. he also learned to play soccer. When Bryant was six-years-old, his father got retired from the NBA and later moved to Rieti, Italy. Bryant used to visit the United States in summers to play basketball summer league. In 1991, his father retired as a player and the family again moved to the United States. He showed the potential of becoming a basketball superstar from his early childhood.

Bryant earned national recognition from his high school career at Lower Merion High School in Ardmore. He became the first freshman in the year to start for Lower Merion's team. During his junior year, he was named Pennsylvania Player of the Year with averaged 31.1 points. While playing for the high school, he received several awards and honors.

Kobe Bryant was selected with the 13th overall pick of the 1996 NBA draft. The year, Bryant was traded to the Los Angeles Lakers. While playing for the team, he became the 19th youngest All-Star in NBA history. He then teamed up with Shaquille O'Neal which helped him to get voted first-team all-NBA. The same year, he also endorsed several brands like Sprite, Adidas, and other top sponsors.

After O'Neal left, Bryant became the second-highest single-game mark in the history of NBA after scoring 81 points against Toronto Raptors in 2006. Two years later, he was named one of the most valuable players in the NBA. The following year, he along with his team won the championship against Orlando Magic. Following the win, he became the part of the memorial service to honor the legendary musician and his friend, Michael Jackson.

From 2008-2012, he played Olympics games and won consecutive gold medals along with his teammates LeBron James, Carmelo Anthony, and Kevin Durant. In 2013, he suffered a torn Achilles which block him to play games. After being recovered, he made his come back in 2015-16 NBA season.

The same year, Bryant announced that he would be retiring. He wrote,

''This season is all I have left to give. My heart can take the pounding. My mind can handle the grind but my body knows it's time to say goodbye.''

On 13th April 2016, Bryant played the last game of his career against Utah Jazz scoring 60 points. After the game, he spoke to the crowd who cheered him throughout the game,

'' I can't believe how fast 20 years went by. This is absolutely crazy ... and to be standing at center court with you guys, my teammates behind me, appreciating the journey that we've been on — we've been through our ups, been through our downs. I think the most important part is we all stayed together throughout.''

He is definitely one of the best former professional basketball players right now. His amazing game has won him fans from all over the world and his huge fan following makes him one of the most popular athletes in the world.

Kobe Bryant has received several awards and accomplishments from his amazing playing skills. Some of them include:

Kobe Bryant made quite a good fortune from his prolific career. Bryant had a jaw-dropping net worth of $600 million at the time of his death. He regarded as one of the highest-paid basketball players in the world. He was paid $ 25 million per year which boosted his net worth every year.

In 2010, Forbes listed him as one of the world's highest-paid athletes with $48 million of an endorsement deal. He also appeared in several commercials along with several known personalities like Lionel Messi. In 2013, he became fifth-highest paid sports star after Floyd Mayweather, Cristiano Ronaldo, LeBron James and Lionel Messi.

Bryant established Kobe Inc. which help to grow brands in the sports industry. He also made an investment in the BodyArmor sports drink company headquartered in Newport Beach, California.

In 2016, he along with his business partner, Jeff Stibel launched a venture capital. Bryant-Stibel which focuses on various businesses with $100 million of funds.

Bryant had several houses which he bought with his eye-catching income. He bought an LA mansion for $8 million which he sold for $6.116 million which became the highest price any house has ever sold. He also sold his Newport Coast home for $6.1 million. He owns other three houses worth $18.8 million altogether.

Bryant has a huge collection of luxury cars include:

Moreover, he also owns a helicopter.

Bryant involved in the charity to fight homelessness in LA. He also founded a Kobe & Vanessa Bryant Family Foundation which helps to improve the lives of youth and families in need, both nationally and internationally.

He also formed The Kobe Bryant China Fund which helps to raise fund for the sports, education and culture programs for children from the United States and China.

His personal life was as perfect as his career. Kobe Bryant married his girlfriend turned wife, Vanessa Laine Bryant. The couple met for the first time in November 1999 when he was 20 and his wife was 17. The following year, the pair got engaged.

The couple finally tied the knot in April 2001 when both of them were young. The former basketball player married life with a wife of seventeen years is going smoothly. Even after several ups and downs in their relationships, the couple is still together living a blissful married life.

Merry Christmas from the Bryant bunch

In December 2011, his wife filed a divorce citing irreconcilable differences. The couple made a settlement and called-off their separation in 2013. Bryant shared,

''I am happy to say that Vanessa and I are moving on with our lives together as a family. When the show ends and the music stops, the journey is made beautiful by having someone to share it with."

The pair is now living together happily.

After a 19-years-old hotel employee filed a case against Kobe Bryant in an allegation of sexual misconduct, he was arrested in 2003 for an investigation. According to the girl, he invited her into his room.

After such allegations, McDonald's and Nutella terminated their endorsement deal with Bryant. The next year, the case was dropped as the accuser refused tri testify. Later, he passes an apology statement,

"Although I truly believe this encounter between us was consensual, I recognize now that she did not and does not view this incident the same way I did. After months of reviewing discovery, listening to her attorney, and even her testimony in person, I now understand how she feels that she did not consent to this encounter."

The case has closed but the specific terms of the settlement are not yet disclosed.

On January 26, 2020, Basketball legend Kobe Bryant and one of his 13-year-old daughter Gianna and seven others killed in a helicopter crash into a hillside in Calabasas, California. Sources reported the horrific incident occurred due to foggy weather.

Here is the video which shows the facts about Kobe Bryant: