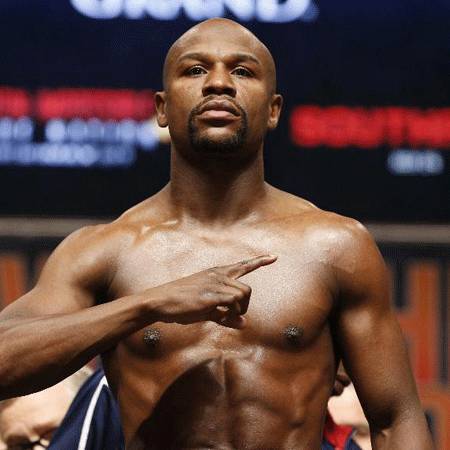 American boxer Floyd Mayweather is one of the best pound-for-pound fighters in history has won championships across five weight divisions. The world-renowned boxer also won three national Golden Gloves as well as an Olympic bronze medal. He won his first championship as a super featherweight in the year 1998. Through his illustrious career, Mayweather has also collected a decent amount of net worth.

Floyd Joy Mayweather Jr. was born Floyd Joy Sinclair on February 24, 1977, in Grand Rapids, Michigan, the United States into a family of boxers. He is an American by nationality and African American by ethnicity. His father was Floyd Mayweather Sr who was a heavyweight contender himself.

His uncles Jeff Mayweather and Roger Mayweather were also professional boxers. Mayweather attended Ottawa Hills High School before he dropped out before finishing his high school level. He was into boxing right from his childhood because of his family environment.

His mother was a drug abuser who died from Aids and his father trained him into boxing from his childhood. His father and uncle had taught him brilliant defensive techniques, so he had few scars. He was called the 'pretty boy' because of that. Floyd won a bronze medal by reaching the semi-finals of the featherweight division in 1996 Atlanta Olympics.

Floyd Mayweather remained undefeated as a professional. He was also a five-division world champion. Floyd is so well known because he won fifteen world titles and the lineal championship in four different weight cla s ses including twice at welterweight.

Floyd Mayweather fought his first professional bout on October 11, 1996, against Roberto Apodaca, who was knocked out in the second round. At that time his trainer was his uncle while his father served his time in jail for drug trafficking. He won most of his fights from 1996 to early 1998 by knockout or TKO.

Mayweather has a memorable career in different divisions of boxing which is why he is called one of the best boxers of all time. He has won uncountable awards and titles in his entire career. Floyd has appeared in movies including More Than Famous andThe World Awaits: De La Hoya vs. Mayweather.

Mayweather also starred in many TV shows and series. He defeated MMA fighter Conor McGregor on August 26, 2017, in Las Vegas. And won a hefty money prize of $300 million.

Standing at the height of 5ft 8 inch a world-renowned American boxing champion Floyd Mayweather has garnered a tremendous amount of net worth from his illustrious career. As per Celebrity net worth, he has an estimated net worth of around $560 million and his salary per fight is around $300 million.

In the year 2016, Mayweather bought a five-bedroom house in Miami Beach, Florida for 7.7 million. In 2015, he purchased a two-bedroom penthouse pad at Vegas strip for $1.8 million. In the same year, he bought value of 3 Bugatti 16.4 Veyron for $6.2 million, Koenigsegg CCXR Trevita for $4.8 million, and Ferrari Enzo for $3.2 million.

As per the Los Angeles Time, Mayweather bought a 15,096-square-foot mansion for $25.5 million, in Beverly Hills. The mansion has a ma s sive theater, guest house and outdoor-entertainment area with a pool. It features a has six bedrooms and nine bathrooms.

A boxing star Floyd Mayweather is not married yet but has four children. He was previously in a brief relationship with his childhood sweetheart and ex-girlfriend Josie Harris. The couple first met in the year 2006 while she was working as a hostess at an event in Atlanta, Georgia. The two later started dating and soon after the two moved together in Las Vegas.

The couple has also three children Koraun Mayweather, Zion Mayweather, and Jirah Mayweather. Following domestic acts of violence, his former girlfriend Harris filed a domestic battery report against him and he was arrested by police on September 9, 2010. He was released from the custody after posting $3,000 bail on  September 10, 2010.

Mayweather later romantically involved in a relationship with Melissa Brim and the two have also a daughter named Iyanna Mayweather. She has also a controversial past with Mayweather. The world-renowned boxer has had relationships with a number of women like Shantel Jackson, Doralie Medina, and Liza Hernandez.

In later 2017, Mayweather dated former Towie star, Abi Clarke. But the dau broke up after a few months of their love affair.

Floyd Mayweather was charged with Criminal convictions including domestic violence, hara s sment, and public altercation many times in his life.

Floyd Mayweather also served jail sentences and house arrest multiple times from 2002-2012. Josie Harris sued Floyd Mayweather for $20 million in 2015 for defamation. He was stripped of his WBO Welterweight Champion title for now following the organization regulations in 2015.