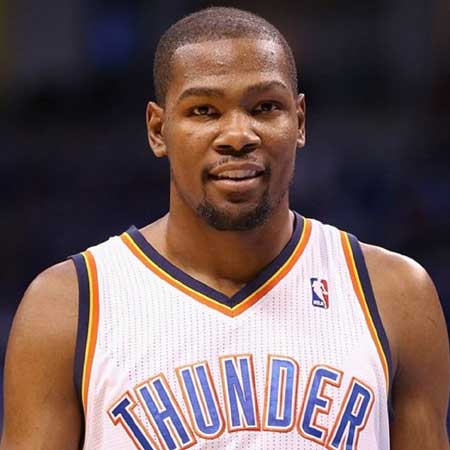 Kevin Durant was born as Kevin Wayne Durant on September 29, 1988, in Washington, D.C. He is of African-American ethnicity and has an American nationality.

Durant is the son of Wanda Durant and Wayne Pratt who were divorced. He was raised up by his grandmother, Barbara A. Davis in Prince George's County, Maryland, on the outskirts of Washington, D.C. He has two brothers, Tony & Rayvonne and one sister, Brianna.

Durant joined the National Christian Academy in Maryland and Oak Hill Academy in Virginia. Later, he transferred to Montrose Christian School for his senior year and attended the University of Texas.

At the age of 10, Durant decided to go for a basketball player. His mother said she would help him and kept on him his whole career about working extra hard and keeping in shape.

Durant went to the University of Texas where he played for the Texas Longhorns for one year before going to the NBA. He won many of the Player of the Year awards including the wooden awards and prestigious Naismith.

Kevin Durant began playing basketball professionally after being picked by Seattle SuperSonics in 2007 NBA draft.  He is engaged in the sports field since 2007 and still playing.

Durant was named the NBA Rookie of the year for his excellent performance in the games. The team made relocated to Oklahoma City and became Thunder. He was also selected to his first NBA All-Star Game during the 2009-10 season.

Durant signed a five-year agreement extension with the Thunder worth around $86 million. Durant surpa s sed Michael Jordan’s record for consecutive games scoring 25 points or more at 41 in April during the 2013-14 season.

Later, Durant missed most of his matches due to fracture in his right foot. On 7 July 2016, Durant signed a two-year contract with Golden State Warriors with $54.3 million and started playing from there. He is currently playing for the Warriors wearing a jersey number 35.

Kevin Durant is unmarried, but currently, he is in a relationship with Jasmine Shine since September 2014. Previously, he dated Letoya Luckett in 2011, but their relationship couldn’t last long and got separated in 2012.

Durant also got engaged with American Basketballer, Monica Wright to get married but he called off their engagement and parted after sometimes.

He also had an encounter with American Model (Adult/Glamour), Joie Chavis in the year of 2014.

Kevin Durant has earned an enormous amount of net worth from his successful career, as a professional basketball player. His current net worth calculated to be around $150 million.