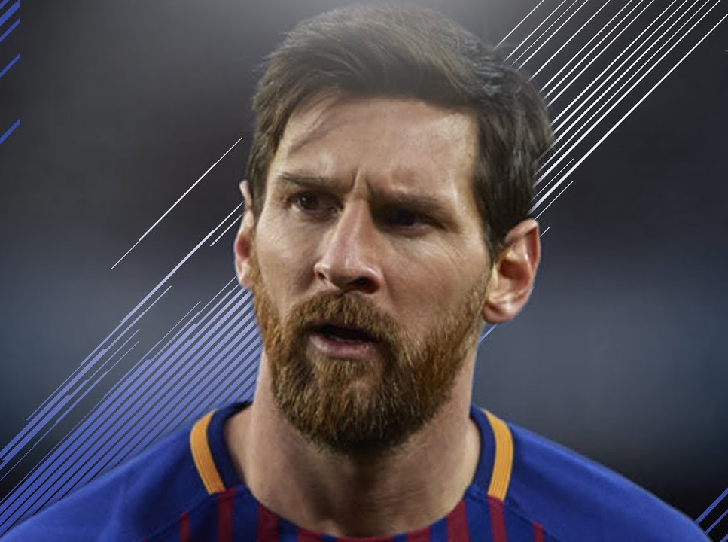 Lionel Messi is an Argentine footballer who plays as forward for Spanish club FC Barcelona and the Argentina national team. He is often considered as one of the best players in the world of this era. He has a record-tying five Ballon d'Or Awards and four-tying European Golden Shoes.

He spent his entire professional career with Spanish Giant FC Barcelona, where he has won 30 trophies, including four UEFA Champions League, five Copas del Rey and eight La Liga titles. He has led Argentina since 2011 and he made Argentina to the FIFA World Cup 2014 final.

Messi was born on June 24, 1987, in Rosario, Argentina. He is the son born to Jorge Horácio Messi and Celia Maria Cuccittini. He has three siblings, two older brothers Rodrigo Messi and Matias Messi and a younger sister, Maria Sol Messi.

Messi is an Argentine by nationality belonging to the mixed ethnicity. He is of Italian and Spanish descent from his father side and has an Italian ancestry from his mother side. His grandparents were the immigrants from Marche and Catalonia.

Messi's father was a steel factory manager whereas his mother was a worker in a magnet manufacturing workshop. He grew up in a football-loving family, which developed his pa s sion towards the sports from an early age.

Messi started to play football at the local club Grandoli which was coached by his father Jorge at the age of five. He started his youth career joining at Newell’s Old Boys. Whilst being in the club, at the age of 11, he suffered from Growth Hormone Deficiency.

Barcelona at the time showed their interest to help this young talent on his treatment on the condition that he should move to Spain and play for the team (Barcelona). Accepting the condition, signing the contract on the napkin paper, Messi family moved to Barcelona and Messi enrolled in the Club’s youth Academy in 2000.

Messi played in Barcelona’s junior teams from 2000-2003 at the start of his youth career. Because of the financial constraints, he was nearly released from the club in 2003 but his youth coach convinced the management to keep him in the club.

In 2003, he made his professional debut for Barcelona C being a third-youngest player ever to play for Barcelona and youngest club player to play in La Liga. He appeared in 10 matches with 5 goals from the team. In 2004, he was promoted to the division B of Barcelona.

Messi spent a season of 2004/2005 in this club appearing in 22 matches with 6 goal scores. He was teamed with the first team of Barcelona though he was not in the first choice of the team.

With every season at Barcelona, he proved his talents and became the first choice of the team and one of the key players in the match. He became one of the undisputed football players. Barcelona now does not want to lose this talent.

His contract has been extended until 2020/21. Having spent such a long year at Spain and been a Spanish Club talent, he has obtained the Spanish Citizenship and has the Argentine Citizenship.

He was offered to play for the national football team of Spain but he declined as he wishes to play for Argentine National Football Team, which is where he actually belongs.

Messi has played with professional footballers such as Neymar, Luis Suárez, Andrés Iniesta, and Marc-Andréter Stegen.

Messi played from the under 20 National Team of Argentina in the year 2004/2005 appearing in 18 matches with 14 goals. He also has the experience of playing in Argentina under 23 National Football Team in the year 2007/2008.

Since 2011, he has been a captain of the Argentina national football team. He led Argentina to three consecutive finals; the 2014 World Cup, 2015 and 2016 Copa America. He is now set to lead the team in the 2018 FIFA World Cup.

When he runs to forth with the ball, it seems lethal and almost is impossible to tackle. He is balanced even when he runs which is extraordinary. He is with great killer instinct in the game. His shots and heads are much appreciated.

His performance is very worthy to watch. Messi is often found searching for the way to finish the move by himself without taking the aid of fellow teammates to shoot a goal. However, this style of his has awarded him with the lists of individual and club awards, titles, and cups.

Lionel Messi's Net Worth and Salary

Lionel Messi's net worth is $280 million at present. He stands a good height of 1.7 meters. His favorite brand is Addidas. His current market value is $153.1 million.

Lionel Messi is widely regarded as one of the greatest players in today’s generation. He is compared to Diego Maradona in Argentina due to the similar stature and playing style. He has short height but has excellent dribbling skills and control capability.

In November 2017, Messi renewed his contract with FC Barcelona for $835 million.  He signed a new contract deal with Barcelona on 25 November, keeping him with the club through the 2020–21 season with the buyout clause set at €700 million.

According to the Forbes, he receives $34 million base salary plus over $30 million for a bonus. Altogether, he receives annually over $60 million.

Messi is the global brand Amba s sador for Turkish Airlines. He also appeared in the advertisement of WeChat application of China, and Gillette commercial. From endorsing these brands, he received $30 million in 2016-17.

Messi is in the media coverage through various adverts and his fabulous playing styles. Besides, he is also a social worker. He has established Leo Messi Foundation to support in education and health care of vulnerable children.

Messi was announced as a goodwill amba s sador for UNICEF in 2010. He donated 600,000 Euros to his hometown children’s hospital in Rosario Argentina for its refurbishment.

He is a married man and has three children. He married to his longtime girlfriend Antonella Roccuzzo since June 2017.

Messi and Antonella Roccuzzo has been together since 2008. Roccuzzo is also a fellow native of Rosario knew Messi since he was five years old. He kept his relationship status secret for a year.

He announced his son's arrival on his Facebook page, writing, "Today I am the happiest man in the world, my son was born and thanks to God for this gift!" He has tattooed Thiago's name and handprints on his left calf.

In April 2015, Messi confirmed that they were expecting another child via Facebook. He missed training ahead of a match against Atlético Madrid to attend the birth of his second son, Mateo, on 11 September 2015 in Barcelona.

CAPTION: Lionel Messi with his wife and children SOURCE: Sportslibro.com

His wife announced they were expecting their third child in an Instagram post on 15 October 2017, with the words "Family of 5". They welcomed their third son Ciro in March 2018.

Messi skipped the match against Málaga on 10 March 2018, after Ciro was born.