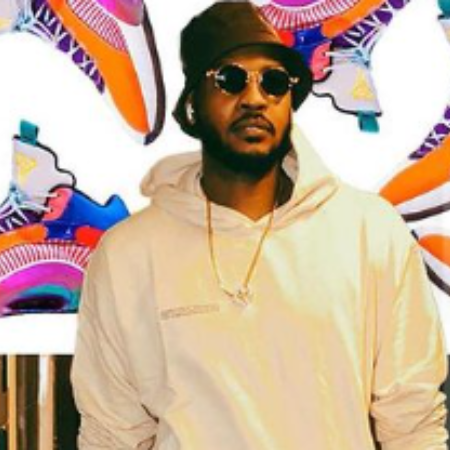 Carmelo Anthony is a famous American Basketball player who has been active in his professional basketball career since 2003.

Carmelo Kyam Anthony was born on 29th May 1984 in Red Hook, New York City, New York, the United States, to parents Mary Anthony and Carmelo Iriarte. Anthony’s father is a Black Puerto Rican, and his mother is African-American.

He is American by nationality and belongs to mixed ethnicity. The 38 years old sportsperson spent most of his childhood days with his siblings, Robert, Wilford, and his half-sister Daphne. His family moved to Baltimore when he was eight years old.

Anthony went on to attend Towson Catholic High School. He began playing basketball and was even named The Baltimore Sun’s Metro Player of the Year.

Soon, he began playing for Oak Hill Academy and ended up with 25.2 points in a game. He then joined Syracuse University.

The media personality grabbed the attention of the NBA in 2003, where he was picked third in the first round by the Denver Nuggets. Since then, he went on to play for the Denver Nuggets till 2011. Carmelo plays the small forward position. Throughout his career, Anthony was honored many times, including USBWA National Freshman of the Year, NCAA Final Four Most Outstanding Player both in 2003, and NCAA champion also in 2003.

Anthony is currently single. There is no information regarding his actual relationship status at present. As the player hasn't been spotted with anyone, he is estimated to lead a single life now.

He has not been dating anyone else since his divorce from his wife La La Anthony. He might be hiding his love life from the media

Previously, the sportsperson was married to La La Anthony. The couple got engaged in 2004 and married on 10th July 2010 in Cipriani’s in New York. However, the pair split in 2017 due to an unknown reason.

His ex-wife is a well-known American radio and television personality, author, businesswoman, producer as well as an actress and is renowned for her exceptional work. The couple gave birth to a son named Kiyan Carmelo Anthony on 7th March 2007.

His net worth is estimated to be $90 million, arising out of his contract with the New York Knicks and his various sponsorships in 2020. Further, Anthony earns good money from his social media presence. Besides, the player is also engaged in various social organizations and works to better society.