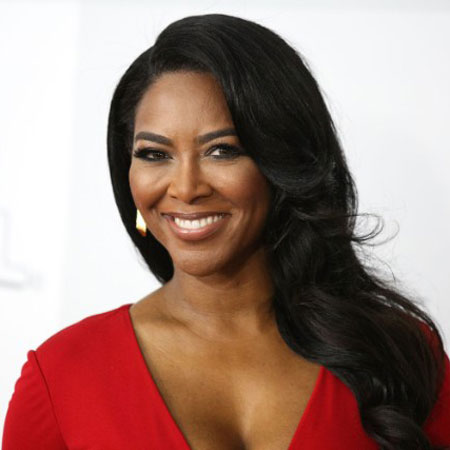 Moore made her Hollywood debut in 1994 from the TV series, The Fresh Prince of Bel-Air. The following year, she made her movie debut from the movie, Waiting to Exhale. She rose to fame after she appeared in the reality show, The Real Housewives of Atlanta.

She married an entrepreneur, Marc Daly in 2017. As of 2018, she announced that she is expecting her first child via The Real Housewives of Atlanta: Reunion Part 1 on Sunday night.

Kenya Moore was born Kenya Summer Moore to teenagers Ronald Grant and Patricia Moore on 24th January 1971 in Detroit, Michigan. Moore is Aquarius. She is American as per nationality and ethnicity wise, she is African-American.

When Moore was born her mother was just 16 and after three days of her birth Patricia Moore abandoned her daughter. Moore was then raised by her paternal grandmother, Doris Grant, and her aunt.  Moore has revealed that her mother didn't even name her. In her words,

‘’Since birth, my mother made the decision at age 16 to pretend she never had me. She has never spoken to me. Even if present in the same room with other people and family, she pretends that I simply don’t exist. She pretends I’m invisible.’’

In 1989, she graduated from Cass Technical High School and later did major in psychology and minored in communication from Wayne State University.

Kenya Moore started her career as a model. Moore started modeling at the early age of 14. In January 1992, she became a cover girl for Ebony Man’s magazine, a Chicago-based Johnson Publishing Company. She also modeled for the Ebony Fashion Fair cosmetic line. 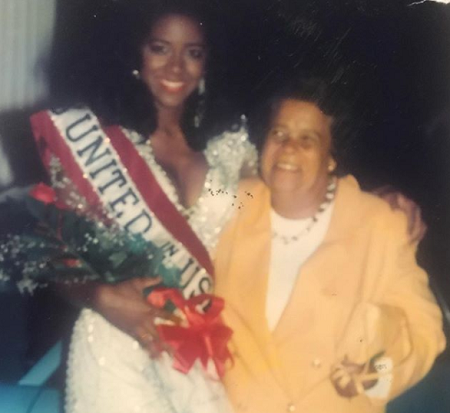 CAPTION: Kenya with her grandmother when she won her first pageant. SOURCE: Instagram

At the age of 22, she won the title of Miss Michigan USA 1993 and then became the second African-American lady to win Miss USA. In 1993, she placed sixth in the Miss Universe pageant.

Kenya Moore worked in several movies and TV series from where she grabbed a huge fan following.

Moore again appeared as a minor character Renee Johnson in the romantic comedy film, Deliver Us from Eva starring Gabrielle Union, LL Cool J, Meagan Good and Essence Atkins. She then worked in several movies, such as Hot Parts, Nas: Video Anthology Vol. 1, Cloud 9 and Trapped: Haitian Nights among others.

Moore made her Hollywood debut in 1994 from the NBC’s sitcom, The Fresh Prince of Bel-Air. The TV series starred Will Smith, James Avery, and Alfonso Ribeiro. Two years later, she worked in two TV series, Martin, and Homeboys in Outer Space.

The Real Housewives of Atlanta

Since 2012, she is working on the reality show, The Real Housewives of Atlanta with Kandi Burruss, NeNe Leakes, Porsha Williams, Cynthia Bailey and Sheree Whitfield. She grabbed huge fan following after she appeared on the show.

In 2015, she stood 7th in the TV reality series, The Celebrity Apprentice hosted by Donald Trump.

Later, she produced and directed Trapped: Haitian Nights. The movie starred Vivica A. Fox, Obba Babatunde, and Rudy Moise. She took over the movie after the movie lost its director. After the film could not find distribution, she founded her production house.

Moore’s 1995 movie, Waiting to Exhale earned $16 million at the box office. The movie was made with the budget of $16 million. IMDB rated it 5.7 stars out of 10. The movie starred Whitney Houston, Angela Bassett, Loretta Devine, Lela Rochon and Gregory Hines. 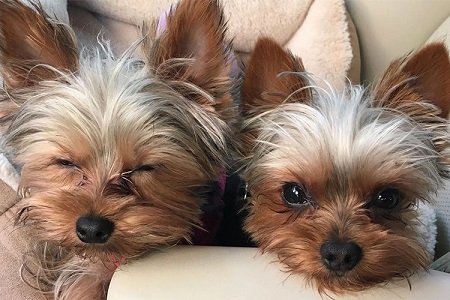 Moore launched a hair line product under her name which helps to grow real hair longer, stronger and thicker. She has two Yorkshire Terrier (King and Twirl) worth $1200-$1500 each.

Moore owns a lavish Atlanta Mansion which was once on the auction block over an unpaid tax bill of $6,984.85. She uses several branded bags including LV, Chanel, and Birgin.

Kenya Moore is a married woman. On 10th June 2017, Moore married her boyfriend, Marc Daly in an intimate ceremony in St.Lucia in presence of her family and friends. 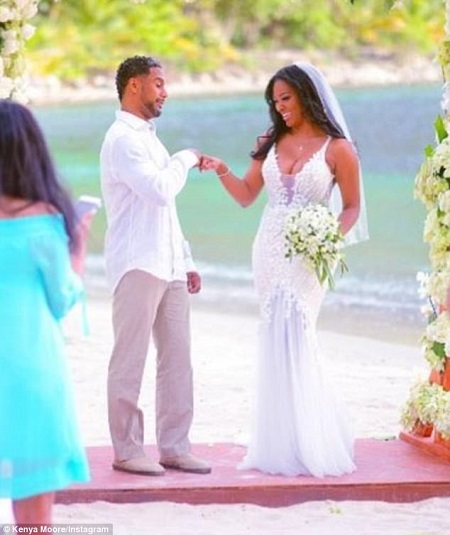 CAPTION: Kenya and her husband during their wedding. SOURCE: Daily Mail

The couple met for the first time with the help of their mutual friend, Chef Roble Ali. The couple eventually started dating and exchanged vows seven months later. She shared the story of her first meeting with her now husband with People.com,

‘’I’ve never experienced the first date like this before. You know when you meet people, and you like them or have good chemistry with them but you don’t feel like the world has changed? I felt like the earth moved after our first date.’’

Moore posted several pictures of her wedding with the caption,

‘’Marc, you are the best man I have ever known. Thank you for loving me unconditionally.’’

On such special occasion, she did not invite her dad. She also clarified the reason for that in an interview with People,

“I decided not to invite my father because you never know what he’s going to say. He can’t be controlled. And I didn’t want there to be anything at my wedding to upset my future husband. I didn’t want anything to spoil my wedding day. … I knew that if he said the wrong thing — and I know my husband — [it would mess up everything].’’

She regrets her decision of not calling her dad on her wedding. 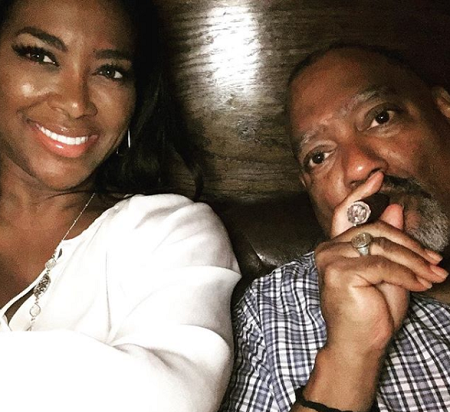 Her husband, Marc is a businessman and a restaurant entrepreneur who used to work as an investment banker in the past. He owns a restaurant, SoCo in New York City.

On 9th April 2018, during the Real Housewives of Atlanta: Reunion Part 1 on Sunday night, Moore announced that she is expecting her first child. She admitted  about her pregnancy to the host, Andy Cohen, saying,

‘’ We will definitely be welcoming a boy or girl in late this year.’’

She further added that she wants a healthy baby.

Here is the video, which talks about Kenya Moore's pregnancy: