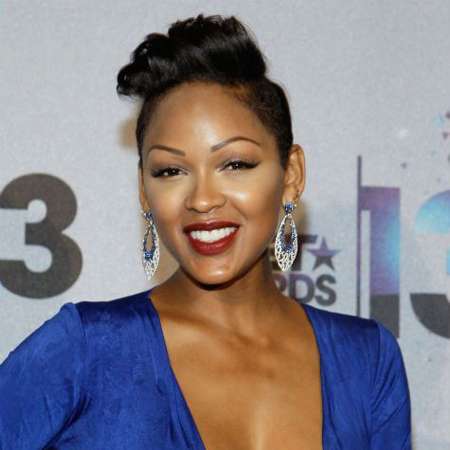 The famous American actress, Meagan Good is mostly known for her apperance in the Think Like a Man and Anchorman 2: The Legend Continues.

Megan Monique Good was born on August 8, 1981. She was born in Panorama City, Los Angeles California of United States. Her mother was a Good manager of her during her teenage. Megan Monique’s father was an LAPD police officer named as Leondis i.e Leon.

#Repost @funk1084 ãƒ»ãƒ»ãƒ» THIS KID HERE MADE ME A PRESENT YEARS AGO FOR MY BIRTHDAY. WHO KNEW SHE WOULD GO ON TO DO AMAZING THINGS. BACK THEN YOU COULD ALREADY TELL HER HEART WAS PURE. LOVE U SKINNY MINI!ðŸ˜ðŸ˜˜ @meagangood #FAMILY #GOODLIFE #WHOKNEW ~ Courtesy of my Uncle G #DemLostFiles

Good always stated her mother as her god. She supported her in every success and steps of her life. Her younger cousin is also a famous singer as well as an actor named as Dijon Talton. She was the middle siblings out of 4 children of her father and mother. Being an African American nationality she was highly influenced by American culture and adapted it sooner. She loves watching horror movies during her free time.

She is a popular American actress. At the early age of four, she started her career. She has done various types of commercials. Films featured and music videos as well as countless TV shows. She is active in this industry from the part 1991 and still is energetic towards her career.

Think Like a Man in 2011 was one of the most successes featuring within her lifetimes.  She played within small films with small roles during her early career. In the year 2000, her real transition began and started achieving good platform and respond from the public as a whole. Her role NINA from 1998 to 2001 is also one of the commendable one in Cousin Skeeter that is also listed as one of the famous shows in Nickelodeon. Similarly, Biker Boyz in 2003 was also one of the major transitions for Good.

In the year 2013, the actress landed a role in the super hit movie Anchorman 2: The Legend Continues sharing the screen along with Steve Carell, Paul Rudd, James Marsden, David Koechner, and Christina Applegate.

Meagan Good's Net Worth And Earnings

Meagan Good has landed a number of iconic roles in both movies and TV series. And in 2019, she has a net worth of around $10 million.

Meagan Good with DeVon Franklin. He is an executive manager of the Columbia Pictures. This couple got engaged in the year 2012 of April. Later with the success of their relationship, they got married on June 16, 2012. They are achieving success in their married life and no issues for the divorce of this couple.

The couple has been together for a long time but they are yet to become a parent. Good currently resides in Los Angeles, California, along with her husband.

Good is also an equally high profiled person within social media. She has a large number of fans within her social networking sites along with a number of pictures posted within her personal pages and profiles. She is often found within Twitter and recently started seeing at Instagram as well.