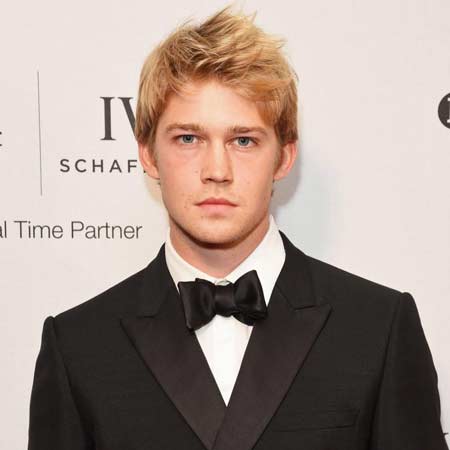 British actor and model Joe Alwyn made his big screen debut in 2016 from the movie, Billy Lynn’s Long Halftime Walk. As of 2018, he is working in four movies, Operation Finale, Boy Erased, The Favourite and Mary Queen of Scots. Alwyn grabbed huge media attention because of his affair. He is in a relationship with the famous singer, Taylor Swift. The couple made their first public appearance in 2017 at the Jingle Ball in London.

Joe Alwyn was born Joseph Matthew Alwyn on 21st February 1991 in North London, England to a psychotherapist mother, Elizabeth Alwyn and a doc u mentary filmmaker father, Richard Alwyn. He is British as per nationality, and as far as his ethnicity is concerned, he is Caucasian.

His parents raised him in Crouch End/Tufnell Park area of London with his siblings, Patrick Alwyn and Thomas Alwyn. Alwyn attended London School. In his late teens, he became the member of the National Youth Theatre.

Later, he joined the University of Bristol where he studied English literature. While studying in the university, he acted in two stage productions at the Edinburgh Fringe Festival. In 2012, he earned a BA degree in acting from the Royal Central School of Speech & Drama.

CAPTION: Joe in one of the scenes of Billy Lynn's Long Halftime Walk. SOURCE: IndieWire

The following year, he worked in British-American mystery drama film, The Sense of an Ending with Jim Broadbent, Michelle Dockery, Charlotte Rampling and Harriet Walter.

As of 2018, he is working in four movies which include

Joe Alwyn has an estimated net worth of $250k as per some sources, however, the amount is still under review. Alwyn currently resides in North London.

He is the face of Prada and has done several photo shoots with many famous models including Gigi Hadid. His modeling career is one of his main sources of income.

Joe Alwyn is in a relationship with famous American singer-songwriter, Taylor Swift. The couple met for the first time at the 2016 Met Gala and made their first public appearance in 2017 at the Jingle Ball in London. They were spotted holding hands and kissing frequently.

‘’ He’s really nice. Really, really friendly, really good dude. They are very much in love, they have quite a low-key relationship, which Taylor likes. It's normal, and no one really knows about it right now.”

The pair seems so much in love, and most of their fans have speculated that Swift’s songs from the album Reputation might be about Alwyn.

In 2018, Swift is planning to buy a $42 million house near Alwyn’s home. Before starting a relationship with Alwyn, Taylor has dated several celebrities including Harry Styles, Taylor Lautner, Calvin Harris and Tom Hiddleston among others.

Besides, Alwyn is a family man and still lives with his parents.

Here is the video which shows 5 facts about Joe Alwyn: