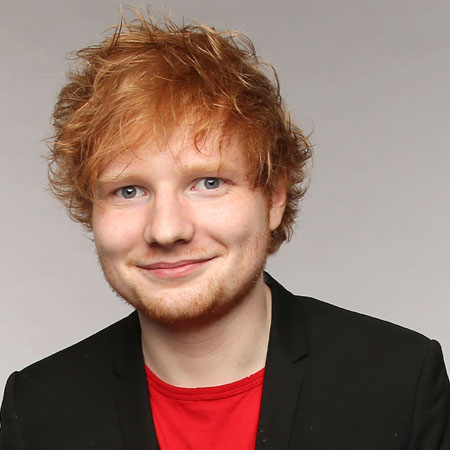 Edward Christopher Sheeran known by his fame name Ed Sheeran is one of the most famous English singer, songwriter, record artist, and guitarist.

Widely known for his numerous writings and songs including "Thinking Out Loud," "Lego House," recently most popular songs "Shape of You," Galway Girl" etc.

Ed Sheeran was born on 17th February 1991 in Halifax, West Yorkshire. He grew up in Framlingham, Suffolk. Sheeran studied the Academy of Contemporary Music in Guildford, Surrey, as an undergraduate from his age of eighteen in autumn 2009.

Sheeran also has an older brother Matthew, a music composer. His father John, and mother Imogen are London born, whereas his paternal grandparents are Irish.

Ed's dad John is an art lecturer and curator, and his mother Imogen is a culture publicist, later turned jewelry designer. His parents also ran Sheeran Lock which is an independent art consultancy, from 1990 to 2010.

His parents often took him to London and spent their weekends traveling. Some of his favorite songs during his childhood include records of Eric Clapton and Bob Dylan. According to Sheeran, the first album he listened to was Van Morrison's Irish Heartbeat.

When Ed was eleven years old, he went to a Damien Rice show with his father. Additionally, he has also cited Dylan, The Beatles, Eminem, and Nizlopi as his biggest musical idols.

As far as his ethnicity is concerned, Ed's father is Irish and mother is English, so he is the part of the ginger race, and he belongs to British nationality.

Ed Sheeran's career began in the year 2004, as he released his first album independently called "Spinning Man." Later, he shifted to London and played in small venues.

In April 2008, Sheeran also opened for Nizlopi in Norwich, as he became one of their guitar technicians. He also collaborated with Essex singer, Leddra Chapman, including CeeLo Green's 'Fuck You".

After he was going viral everywhere around the world, On 26th April 2011, Ed made his appearance on a TV music show "Later... with Jools Holland, where he performed his first single, 'The A-Team.'

Sheeran's 'The A-Team' was released as a digital download in the UK after six weeks he released his debut album. His first album became very popular as it entered the UK Singles Chart at number three, which was sold over 58,000 copies in a week.

After his debut album had taken a big hit, Ed released his second studio album 'x' on 23rd June 2014. In a gap of three years, he wrote more than more than 120 songs for his album. The album's featured tracks were produced by Rick Rubin, Benny Blanco, and Pharrell Williams.

Again, his album 'x' reached at number one in both Us Billboard 200 and the UK Album Chart. To support his album, Sheeran went on a world tour which began from 6th August 2014 in Japan.

Followingly, on 24 September 2014, Ed's one of the most hit songs till date 'Thinking Out Loud' was released, as his album's third single.

Clashing his previous music videos, Ed appeared as a lead role in the single's accompanying, where he showed up with ballroom dance.

Later, in 2017, March 2017, Sheeran another hit album entitled ÷ (Divide) was released. The album reached number one in US, Uk, Australia, Germany, Canada, the other main markets also.

It was the first time in history as an artist has grabbed the top two UK chart positions with his new songs. The Same day, Ed also became the first solo artist to debut at one number and two on the official German Single Charts.

Ed Sheeran, is also a close friend of Taylor Swift, as they are seen together a lot of times, in the musical tour, interviews, and restaurants. Ed has also written few songs for her.

Some of his other songs which are recently trending includes, 'Perfect,' 'Galway Girl,' 'Nancy Mulligan,' 'Barcelona' 'Eraser' and 'New Man.'

Ed Sheeran is engaged to his high school girlfriend Cherry Seaborn. The duo got engaged in 2018 New Year’s Eve. The Perfect singer Ed Sheeran announced his engagement via his Instagram on Saturday 20 January 2018.

Sheeran and Seaborn have known each other since their high school days but they started dating only in summer 2015 after his friend Taylor Swift invited Seaborn in her Independence Day fete at her Rhode Island Home.

Ed Sheeran was in a relationship with Scottish singer, and songwriter Nina Nesbitt in 2012. Nesbitt is the subject of Sheeran's songs, 'Photograph' and 'Nina.'

In January 2014, Ed was in an affair with Athina Andrelos, who worked as a tour manager for him in major tours in 2014.  Ed was influenced inspired to write the song 'Thinking Out Loud.' However, the couple split up in Feb 2015.

Ed Sheeran is a good friend of singer Taylor Swift. He has written few songs for her. Sheeran and Swift have also performed together in several events and functions.

Ed Sheeran has won numerous awards as of 2018 including four Grammy and 2 Echo Awards.  Some of the major awards he achieved include Grammy Award for Song of the year, and Grammy Award for Best Pop Solo Performance (Thinking Out Loud), Peoples Choice Awards, MTV Video Music Award for Best Male Video and much more.

Ed Sheeran earns an enormous amount of money from the musical career, as he is one of the top solo artists in the current state with numerous songs which are rated number one in various nations.

Ed Sheeran’s net worth is $68 million, according to The Richest. He made this fortune because of his musical career. He earned nearly $37 million combined income from his recent album Divide and live tours.

His income has massively hiked these years. In 2016, he earned total $33.5 million from his record sales and live tours. In 2014, he collected $10.5 million revenue from his album X.

In 2011, he received $3 million amount after selling over 2 million copies of his debut album Plus.
His videos have over 10 billion views on YouTube and he received a huge amount of money from YouTube.