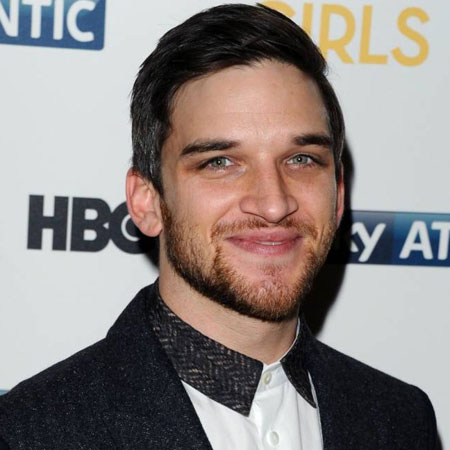 American actor, Evan Jonigkeit is popularly known for his roles in movies and TV series like X-Men: Days of Future Past, Easy, Bone Tomahawk and Frontier. Jonigkeit also appeared in several theater plays. In 2016, he produced several short movies and doc u mentaries for which he was even nominated for Primetime Emmy Awards.

Evan Jonigkeit married his longtime girlfriend, Zosia Mamet, an actress, in 2016. They are living a blissful married life. Their wedding ceremony took place at Cedar Lake Estate in Port Jervis, New York. The couple does not share any children at present.

Evan Jonigkeit was born on 25th August 1983 in the United States of America. His star sign is Aquarius. He is American as per nationality and belongs to White ethnic background. His parents raised him in Bucks County, Pennsylvania.

In 2001, Jonigkeit graduated from Neshaminy High School. Later, he attended Temple University on a baseball scholarship. He was interested in baseball, but after being sidelined with tendonitis, he pursued a career in acting.

Evan Jonigkeit appeared as an actor in movies, TV series and theater as well. Jonigkeit also worked as a producer in various films and doc u mentaries.

Evan Jonigkeit made his Hollywood debut in 2007 appearing in a short movie, Sarah + Dee and a TV series, Mysterious Journeys narrated by Erik Todd Dellums.

In 2011, Evan Jonigkeit enrolled in theater acts and plays after an agency in New York picked him. He starred in Broadway play, High at Booth Theater. He rose to fame after he appeared in one of the scenes of the play opposite Kathleen Turner.

In 2013, he appeared as the lead Broadways play, The Snow Geese alongside Mary-Louise Parker. The same year, he acted in Really Really at Lucille Lortel Theater.

Evan Joingkeit enrolled in producing movies and doc u mentaries in 2016, producing a short movie, Mildred & The Dying Parlor. A year later, he produced a live special, Stand for Eights: A Benefit for ACLU (American Civil Liberties Union) with Tom Hanks for which he won a nomination for a Primetime Emmy Awards.
In 2018, he produced two doc u mentary films; Kate Can’t Swim and Be the Ball.

The couple spent over $1 million for renovating their three-storeyed house in Brooklyn’s trendy Bushwick which they bought for $1.037 million in November 2013.

Evan Jonigkeit is married but has no children yet. Jonigkeit married his longtime girlfriend, Zosia Mamet on 1st October 2016 in a private ceremony in the weekend. The ceremony was attended by limited guests including families and close friends.

The couple announced their marriage to the world by posting the same picture on their Instagram account. Jonigkeit captioned the photo,

Whereas his wife captioned the same picture,

my best friend, my soulmate, my HUSBAND, I love you. Here’s to forever and a day.

His wife, Mamet is a popular American actress popularly known for her roles in the TV series Mad Men, United States of Tara, Parenthood, and Girls. The pair dated for years before exchanging the vows.

On 1st April 2013, during the premiere party for The Company You Keep, the couple held their hands and kissed each other. From the day, the news about their dating came out officially.