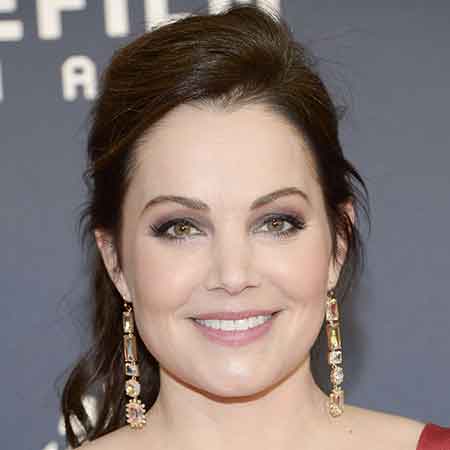 Canadian actress, Erica Durance, is popularly known for her breakthrough role, Lois Lane in the series, Smallville for which she was nominated for several awards. Durance is also popular for her role Dr. Alex Ried in the medical drama series, Saving Hope. As of 2018, she is working in the superhero series, Supergirl. Durance married twice and from her second marriage, she has two children.

Erica Durance was born on June 21, 1978, in Calgary, Alberta under the birth sign Cancer. She is the daughter of Gali Durance and Joel Durance. Her parents raised her with her siblings, a brother and a sister in Three Hills, Alberta, Canada.

Durance was trained as a classical singer in a tender age. After graduating from high school, she moved to Vancouver in 1999 to pursue a career in acting. She then studied acting at the Yaletown Actors Studio for years with David Palffy.

Erica Durance debuted in movies in 2002 as Tara Knowles in horror film, The Untold. The film starred Lance Henriksen, Andrea Roth, and Taras Kostyuk. The following year, Durance appeared in House of the Dead with Ona Grauer, Jonathan Cherry, and Ellie Cornell.

Some of her other movies include The Bridge, The Butterfly Effect 2, and Tim and Eric's Billion Dollar Movie among others.

Durance made her TV debut in 2001 as a dancer in conspiracy fiction thriller drama, The Lone Gunmen. Three years later, she made a guest appearance in a TV show, The Chris Isaak Show.

Her breakthrough role came in 2004 in WB's TV series, Smallville where she portrayed the role of Lois Lane (Chloe's cousin). She shared the screen with Tom Welling, Allison Mack, Kristin Kreuk, and Michael Rosenbaum. She was associated in the series from 2004 to 2011. Her performance helped her to get nominated for several awards including Saturn Award and Teen Choice Awards.

She is also popular for her role in the supernatural medical drama TV series, Saving Hope where she portrayed the lead character Dr. AkexRied (Chief Surgical Resident and fiancee of Chalie Harris). The series starred Michael Shanks, Daniel Gillies, and Kristopher Turner. She also made her directional debut from the series. She also appeared as a producer of the series for 75 episodes.

Durance was nominated for Canadian Screen Awards twice for her performance in the series. Since 2017, she is working as Alura Zor-El (mother of a super girl) in CBS' superhero action-adventure TV series, Supergirl. The series starred Melissa Benoist, Mehcad Brooks, and Chyler Leigh. It is believed that she will be replacing the supergirl Laura Benanti in the third season of the series.

According to Celebrity Net Worth, Erica Durance has an estimated net worth of $4.5 million whereas her net worth is estimated to be $2.5 million as per The Richest.

As per some online sources, a TV star averagely makes a salary that ranges from $150k to $1 million. Similarly, the actress gets paid around $500k.

In 2013, the actress became the part of Canadian-American action horror film, House of the Dead. The movie collected $13.8 million at the box-office against the budget of $12 million.

The actress, Durance supports various charitable works. She is a supporter of World Vision Canada. In 2006 at the Wizard World Chicago convention, she co-hosted the Superman/Batman #26 art auction which raised over $70k.

Erica Durance has been married twice. In 1996, Durance tied the knot with her first husband, Wesley Parker. The relationship did not last long and divorced in 1999 for some undisclosed reasons.

After the divorce, Durance became close to Canadian actor, writer, and director David Palffy who was her acting coach. The couple started dating in 2001 and eventually married in 2005. Years after their marriage, Durance announced that she is expecting her first child with her husband, Palffy.

In February 2015, the pair welcomed their first child, Lochlan Palffy. The following year, she announced her pregnancy and in December 2016, she gave birth to her second son, Liam James Palffy. Durance also has a stepson, David Palffy from her husband's previous relationship.

Check out an interview with Erica Durance in Canadian Screen Awards 2017.