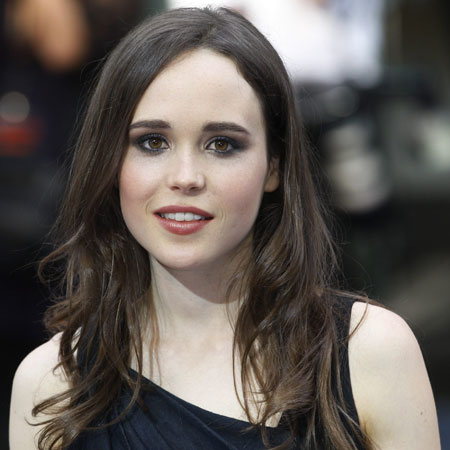 Ellen Page is a famous lesbian Candian actress. She is best known for her roles in the movies like- X-Men series, Smart People, Juno, The Tracy Fragments and Inception among others, She debuted on TV from the series, Pit Pony.

Page is currently married to her lesbian partner. They tied the knot secretly after dating for some months.

Ellen Page was born Ellen Grace Philpotts-Page on 21st February 1987 in Halifax, Nova Scotia under the birth sign Pisces. Page is Canadian as per nationality, and as far as her ethnicity is concerned, she is White.

She is the daughter of Martha Philpotts (a teacher) and Dennis Page (a graphic designer). She studied up to grade 10 in the Halifax Grammar School then shifted to Queen Elizabeth High School and eventually graduated from the Shambhala School. Right from her school days, Page started appearing in various plays.

Ellen Page made her TV debut at the early age of 10 from the TV series, Pit Pony by Eric Till. She worked in the series until 2000 and followed by another series Trailer Park Boys. She then appeared in Ghost Cat, Homeless to Harvard, Saturday Night Live, Out There and Family Guy among others.

Page debuted in the movies in 2002 from the short movie titled, The Wet Season. Some of her popular movies include:

Page is currently working in series and movies which are to be released soon like- The Umbrella Academy (2018), Naya Legends of the Golden Dolphins (2019) and Robodog (TBA).

Ellen Page was nominated for various prestigious awards and won some of them as well which include:

Ellen Page proudly announced that she is lesbian in February 2014 during Human Rights Campaign's Time to Thrive in Las Vegas, a conference about addressing the issues within the LGBT community.

Page married her girlfriend turned wife, Emma Portner secretly in a private ceremony. The couple announced their marriage via Instagram by posting a picture of their matching wedding rings with a caption,

‘’Can’t believe I get to call this extraordinary women my wife. @emmaportner.’’

The pair started dating back in July 2017 and tied the knot only after months of dating.

Before this, Page was in a relationship with Samantha Thomas; an artist who graduated from the Art Center College in Design in Pasadena. The pair dated for a year and separated afterward. They were last pictured together in public in January 2017.

Page was once rumored to be dating Ben Foster and Emile Hirsch. However, they did not confirm their relationship.

On 10th November 2017, Page posted a lengthy post on her Facebook account stating that she was abused by Brett Ratner on the set in front of other actors during filming of X-Men: The Last Stand,

I was eighteen years old. He looked at a woman standing next to me, ten years my senior pointed to me and said: 'You should f*** her to make her realize she's gay.' He was the film's director, Brett Ratner. I was a young adult who had not yet come out to myself. I knew I was gay but did not know, so to speak. I felt violated when this happened. I looked down at my feet, didn't say a word and watched as no one else did either. This man, who had cast me in the film, started our months of filming at a work event with this horrific, unchallenged plea. He 'outed' me with no regard for my well-being, an act we all recognize as h 0phobic.

Not only this, she even stated that Ratner pa s sed several bad comments like- ‘’flappy pussy’’ to the ladies on the set. After the post, Anna Paquin, the actress of the movie confirmed Page’s story on Twitter,

I was three when that comment was made. I stand with you. @EllenPage.

On her post, Page even revealed that she was taken to a dinner by a director when she was 16 where the director fondled her leg under the table. Later, she even stated that the director asked her to sleep with a man.

Ellen Page who worked in numbers of movies and series, currently, has an estimated net worth of $14 million.

Some of her movies that made a good collection at the box office include:

Page is a spokesperson for ‘’Cisco System'' and also appeared in the various advertisement of it.

She owns a house in Hollywood Hills Home which she bought from Venus Williams for $1.7 million. She also has a Ferrari worth $256,550.