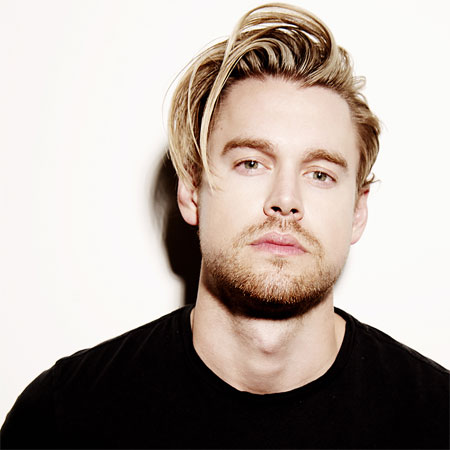 Chord Overstreet is an American actor and singer who gained recognition for his role as Sam Evans on Fox series "Glee". He has also been featured in several songs such as "All I Want for Christmas Is a Real Good Tan”, "Homeland", and "Hold On". Furthermore, he has also played in a number of music videos for the musicians Hot Chelle Rae and Nick Jonas.

Chord Paul Overstreet was born on February 17, 1989, in Nashville, Tennessee, United States of America. He was born to Julie Miller and Paul Overstreet. His mother was a hairdresser and his father was a country music singer and songwriter. Chord holds an American nationality and belongs to theGerman, Irish and English descent.

Chord has five siblings; an older sister Summer, older brother Nash(guitarist in the Hot Chelle Rae band) and three younger sisters Harmony, Sky and Charity. Chord started playing the mandolin, drums, flute, piano, and guitar at an early age. He has modeled for several advertisements such as Hollister and Gap while he was a teen.

Chord Overstreet started his acting career from the web series Private in 2009. The same year, he appeared in a thriller movie The Hole and also appeared in an episode of the TV series iCarly.

Later in 2010, Chord was cast as the role of Sam Evans in Fox Channel show Glee. The next year, he was featured in an episode of The Middle. In 2015, he worked as Nick in 4th Man Out. As of 2018, he is busy in the filming of The Swing of Things.

Overstreet once told musicians like Hall&Oates, Jimmy Buffet, Bob Dylan have been his source of inspiration to pursue a career as a musician.  Chord signed a recording contract with Safehouse Record on December 15, 2015. He was the first artist to sign to the label which was founded by the musicians like Nick Jonas, Demi Lovato, and Phil Mclntyre. After signing the record, he released a single All I Want For Christmas is a Real Good Tan.

On February 3, 2017, Chord released another single Hold On. That May, he released his first EP, Tree House Tapes. Later in June, he was featured on NBC's The Today Show where he sang his song Hold On. Later he performed the same on The Tonight Show Starring Jimmy Fallon presented by Jimmy Fallon on August 14, 2017.

Achievement and Award of Chord Overshoot

Chord Overstreet has been nominated for Screen Actors Guild Awards from 2011 to 2014. In 2013, he has won Teen Choice Awards for performing in "Glee".

Chord Overstreet has been appearing in web series to widely popular Television series Glee and also appearing movies he has earned a satisfying amount of money throughout his career.  As of 2018, Chord Overstreet's net worth is estimated at $1million.

In 2010, Overstreet was offered a whopping $100k to pose private picture in the racy GQ photo shoot for the cover of  The Playgirl Magazine.

As of December 2018,  Overstreet is in a happy relationship with English actress Emma Watson. Chord dated the famous star from Harry Potter movie series for over six months before he broke up from her in May 2018. The couple was speculated dating after they were spotted cozying up by candlelight, at a Nathaniel Rateliff & the Night Sweats concert in February.

About a month after their breakup, the couple sparked their reconciliation rumor after the series of photos of the couple shopping in Los Angeles and even sharing a kiss. Since then, they have been in a good relationship.

Before he linked in a romantic relationship with Watson, he dated a few numbers of girls. He first dated Dallas Lovato sister of famous singer Demi Lovato.