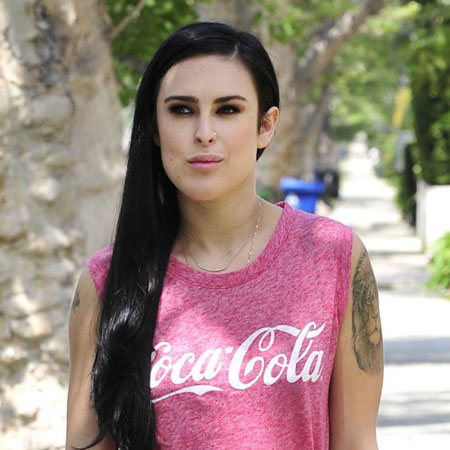 Rumer Glenn Willis better known as Rumer Willis is an American actress and singer. She is best known for the daughter of Bruce Willis and Demi Moree. Rumer is the winner of Dancing with the star of Season 20.

Rumer Willis was born on August 16, 1988, in Paducah, Kentucky, United States and was raised in Hailey, Idaho. She is the oldest daughter of actor Bruce Willis and actress Demi Moree.

Her parents were the admirer of a British author, Rumer Godden, so they named their daughter after him. Rumer belongs to white ethnicity and holds an American nationality.

Rumer’s father Bruce Willis is a famous American actor, producer, and singer where her mother Demi Moree, is also American actress, former songwriter, and model. Her parents divorced after being together for thirteen years.

Rumer grew up with her two younger sisters, Scout Larue and Tallulah Belle Willis; however, she also has a two half-sister from her father’s marriage to Emma Heming; Mabel Ray Willis and Evelyn Penn Willis.

Rumer did her schooling from Wildwood Secondary School in Los Angeles, California. Later, she joined the University of Southern California but dropped out after the first semester to focus on her acting career. She even enrolled as a freshman at the Interlochen Art Academy in Interlochen, Michigan.

Rumer Willis began her acting career at the age of five. In the year 1995, she first appeared in ‘Now and Then’ along with her mother, Demi Moree. The next year 1996, she appeared in Striptease. Rumer even worked with her father twice; The Whole Nine Yards in 2000 and Hostage in 2005.

Later, Rumer was featured in comedy, horror movies such as The House Bunny, From within, and much more. In 2008, she became the spokesperson of Ocean Pacific. She has also appeared in Television shows like Miss Guided, CSI: NY, The Secret Life of the American Teenager and more.

Rumer appeared on Dancing with the Stars of season 20 along with Valentin Chmerkovskiy and won the show on May 19, 2015.

Rumer is a beautiful actress and has reached the age of 29 now. She is single at present, however, was in a relationship with many guys previously.

First Rumer was in a relationship with British-American actor Rafi Gavron in 2007. The same year there was a rumor that she was linked up with American businessman Harry Marton.

Rumer then met American model and actor Micah Alberti. The couple started dating in 2008 and stayed in a relationship for almost two years. After their break up in 2010, there was also a rumor that she was linked up with American actor, Chord Overstreet.

After a year, Rumer started having an affair with American actor, Jayson Blair from 2012 to 2013. She was last seen with English actor, Ricky Whittle in 2014.

The Hostage actress, Rumer Willis has maintained an excellent net worth of $3 million. Her acting career and appearance in the movies and TV shows has been the main source of his revenue.

The House Bunny Striptease From within Now and Then