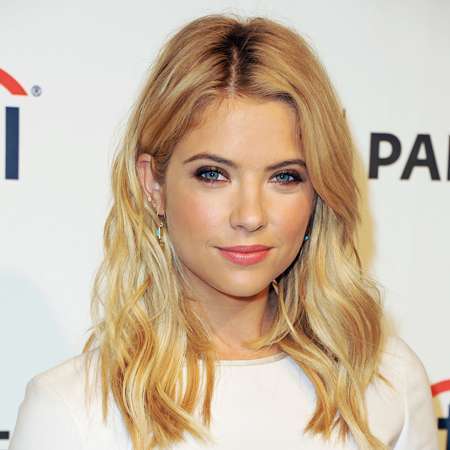 Ashley Benson is an actress and model. She is most popular for her role in the TV series Pretty Little Liars. Her nationality is American and ethnicity is white. She was famous for her role as Hanna Martin in the series.

Born on December 18, 1989, in Anaheim Hills, Anaheim, California, USA. Another signature performance of the celebrity was he work in the soap opera series Days Of Our Lives. Her father’s name was Jeff Benson and mother’s name is Shannon.

This actress has an older sister named Shaylene. This American actress was very fond of dancing from an early age of four and used to dance in the ballet, jazz, hip-hop, and lyrical styles. Due to her pa s sion, she was also asked to an audition to sing solo at four services at her church. She also appeared in a few music videos from an early age.

Benson started her acting career by working and appearing in various TV commercials. This was just the beginning for the star and she was brought into movies very soon. This happened when Benson signed a three-year contract with the NBC daytime soap opera Abigail “Abby” Deveraux.

Later in 2008, she played a witch disgusted as a cheerleader in the popular series Supernatural. No clear information is available about the celebrity’s academic career like the school she went in and the college or her certificates and major. This celebrity had to end up her contract with Days Of Our Lives to make a good career into movies.

This was the decision which made the celebrity more popular among her fans and followers. On leaving the soap shows the celebrity had a hard time and she said these words for presenting gratitude towards her career as a daily soap actress.

“I got off it, I mean I had talked with the producers about doing this film, and they weren't going to let me do it... I had just pa s sed up so many opportunities where I could have done a film. So this big thing just came up, and I ended up getting to do this. I'm happier that I got off the soap though. I mean I give all my credit to them because I have learned so much from being on soap operas and working with amazing actors who've been on there for like thirty, forty years. It was an honor to work with them. It's definitely given me all my background. But getting off the soap opera helped me a lot too because I can move on to bigger and better things. So I am definitely thankful I got to be on a soap opera though.”

After deciding to work in movies, she appeared in the Lifetime original film, Fab Five; The Texas Cheerleader Scandal, where she played a cheerleader. This movie is based on a true story.

You May Like, What is Ashley Benson lately busy with?

This American star has a height of 5 feet and 3 inches. She is beautiful in her appearance and has a well-maintained body as well. Her net worth is about 3 million dollars. But there is no exact information on the TV star's net worth in recent time.

The American celebrity is socially active through her social networking sites. Her pictures are liked and appreciated by many fans and followers all around the world. She is very active and interactive through her personal Facebook page, Twitter and Instagram.

Ashley was previously in a relationship with Ryan Good, But her affair didn’t last long with the celebrity. Later the daily soap actress was linked up with actor Tyler Blackburn. This rumor turned true and both the actors are still in an affair.

Though their relationship lasted for a long time, there is no news of these two getting married. No sources have verified the news but these two celebrities are close to their marriage according to some sources.

In the support of this statement, Ashley has not been involved in an affair so far. Despite this information, this American celebrity has kept her personal life very closely. This is the reason why the media has very less information about what is going on in her life. However, despite her longtime relationship with the actor, no specific plans have come out about the two getting married or engaged. Some sources once highlighted the two actors getting married, but this news was denied by Ashley herself.

There are no rumors and controversies about this American actress so far.

Benson has not been involved in supporting and promoting any products or brands so far. No endorsements are found under the celebrity so far as well.

As of now, she is a bisexual and is dating English model and actress Cara Delevingne. The couple spotted together numerous times over the past year.