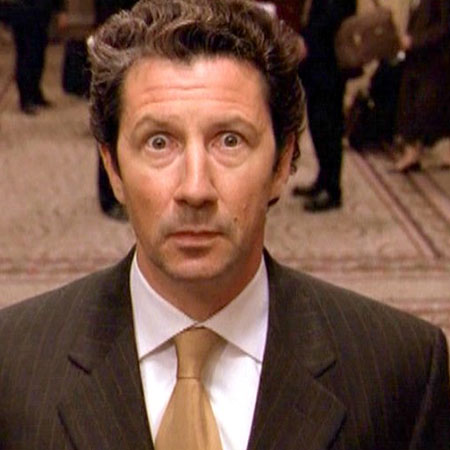 The British actor, Charles Shaughnessy is most widely recognized for his TV roles on shows such as Days of Our Lives, The Nanny, and his recurring role on Mad Men. Along with name and fame, he also won numerous awards for his outstanding performance which includes, Emmy Award for Outstanding Performer in an Animated Program for his portrayal of Dennis the Goldfish on Stanley on 11 May 2002.

Charles Shaughnessy was born Charles George Patrick Shaughnessy on 9th of February 1955 in London, England to Alfred Shaughnessy, and Jean Lodge. His father was the principal writer for the popular PBS series Upstairs, Downstairs (1971) and his mother was an actress.

Further, his great-grandfather Thomas Shaughnessy was an American-Canadian railway administrator of Irish descent. Shaughnessy has a brother, David Shaughnessy, is also an actor as well as a television producer and director.

Talking about his education, Shaughnessy went to the Eton College and later graduated with a law degree from the Magdalene College. Then, he wrote a thesis on the House of Lords at the University of Cambridge. Moreover, he also joined a London drama school to pursue acting.

The English actor Charles Shaughnessy made his acting debut from the 1983 Drama, crime, Jury as Julian Spears. The same year, he was cast as John Rennie in British television series, Agatha Christie's Partners in Crime.

Further, he has an outstanding performance in long American daytime soap opera, Days of Our Lives, where Shaughnessy portrayed the dual character of Shane and Drew Donovan. The series of characters are Deidre Hall,  Kristian Alfonso, Nadia Bjorlin,  and many others.

After that, Charles Shaughnessy made her notable appearances in the number of TV series such as The Nanny, Everything to Gain, Mom's Got a Date with a Vampire, Kids in America, National Lampoon's Dorm Daze 2, The Bay, Scooby-Doo! Mystery Incorporated, and many more.

Further, she also voiced for several series, All Grown Up!, The Tale of Despereaux, The Marvelous Misadventures of Flapjack, Scooby-Doo! Mystery Incorporated, and others. Shaughnessy worked in video games and they are  Freelancer, Saints Row, Saints Row 2, and Kingdoms of Amalur: Reckoning among others.

As of April 2019, Shaughnessy's last appearances was in an American television mockumentary family sitcom, Modern Family. He was cast along with Ariel Winter,  Sarah Hyland,  Sofía Vergara, and others.

He has also appeared in American Sitcom The Nanny alongside Fran Drescher and Camelia Kath.

Along with acting, Shaughnessy is active on the Internet, as he started a video blog on YouTube in the midst of the 2008 US Presidential Election as a supporter of Barack Obama.

Charles Shaughnessy has been active in the entertainment industry for over three decades and in this duration, he has worked in some notable film and series. As of 2019, he has an estimated net worth of $30 million, as per celebrity net worth.

Further, the average salary of a British actor is $44.46 per hour, and theater actors make £515 per week. So, he might earn in the same range.

Charles Shaughnessy, aged 64 (2019) has been in a marital relationship with wife Susan Fallender for a long time. The couple married on 21 May 1983, and shares two daughters, Jenny Johanna Shaughnessy born on 18 March 1990, and Madelyn Sarah Shaughnessy born on 8 February 1995.  Further, their elder daughter is an a s sistant to head production at Nickelodeon.

Do you know? The 5 feet 9 inches (1.82) tall in height actor Charles loves football and is a huge supporter of a professional football club, Chelsea F.C.

Here is the short interview of Charles Shaughnessy, as he talks about his days as Mr. Sheffield on the hit show 'The Nanny', the problems he faced with his English accent and his aristocratic background.