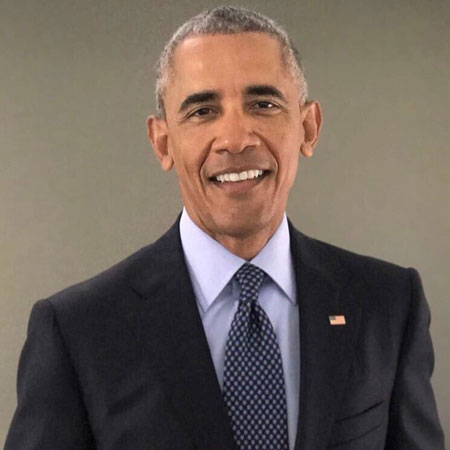 Barack Hussein Obama II is a successful American politician. He served as the 44th president of the United States. He is the first Afro-American president to serve in the office. He has also served in the U.S. Senate representing Illinois.

Barack Hussein Obama II was born on August 4, 1961, in Honolulu, Hawaii. He belongs to American nationality and ethnicity wise, he has a mixed ethnical background.

Obama is the son born to mother, Ann Dunham, a white American from Kansas, and father, Barack Obama, Sr., a black Kenyan.

Obama’s parents met at the University of Hawaii for the first time. Unfortunately, Barack is not in touch with his father. His father left the home when he was at the age of two.

Obama’s parents divorced when he was just an infant. After that, his father came back to Kenya in the year 1964. There, Barack Sr. married for the third time. He visited his son Barack Obama only once, during the 1971 Christmastime. He later died in a tragic automobile accident when Barack was 21.

Following his father death, Obama recalled his Early childhood and spent with his father in an interview,

"That my father looked nothing like the people around me – that he was black as pitch, my mother white as milk – barely registered in my mind.”

Obama completed his schooling from the Punahou School in 1979 with the aid of a scholarship from fifth grade until his graduation. He later went on to Los Angeles to attend Occidental College in 1981, before transferring as a junior to Columbia College, where he majored in political science with a specialty in international relations and in English literature.

Obama accomplished his Bachelor of Arts degree in 1983. Following his graduation, he began working as a community organizer for low-income residents in the Roseland and Altgeld Gardens Communities from June 1985 to May 1988.

In the fall of 1988, Obama entered Harvard Law School. The following year, he met with constitutional law professor Laurence Tribe and graduated with Juris Doctor Degree magna c u m laude in the year 1991.

In 1992, Barack Obama took a part-time teaching position as a lecturer at the University of Chicago Law School and finally became a senior lecturer at the university in 1996. He later joined the law firm of the Davis, Miner, Barnhill & Galland to practice as a civil rights lawyer.

After serving as an a s sociate for three years, Obama also worked for the firm as counsel from 1996 to 2004. His advocacy work led him to run for a seat in the Illinois State Senate. He successfully ran as a Democrat winning the election for the first time in 1996.

Obama later advocated for the bill that increased negotiated welfare reform, increased tax credits for low-income workers, and promoted increased subsidies for childcare. After that, he reelected to the Illinois Senate in the year 1998 and again in 2002.

After resigning from the Illinois Senate In November 2004, he decided to run for the U.S. Senate and won in an unexpected landslide in the primary election in March 2004.

As a Senator, Obama co-sponsored the America and Orderly Immigration Act. The former POTUS introduced two initiatives on his name: Federal Funding Accountability and Transparency Act of 2006, which authorized the establishment of USAspending.gov and Lugar-Obama, which extended the Nunn-Lugar Cooperative Threat Reduction concept to conventional weapons.

Obama funded the Iran Iran Sanctions Enabling Act and an amendment to the Defense Authorization Act to add safeguards for personality-disorder military discharges.

Obama is an ambitious and successful political figure in the United States who decided to run for the presidency and marked his candidacy for President of United States, in 2007.

Obama became the president of the United States after defeating the Republican presidential nominee, John McCain on November 4, 2008. He received 365 electoral votes whereas McCain received only 173 electoral votes.

Obama’s opponent, Delaware Senator Joe Biden, became vice president. As a president, he was sworn on January 20, 2009, when the American economy wasn’t stable, in the midst of a severe global recession.

Obama was named the 2009 Nobel Peace Prize laureate, after nine months. During his first two years of presidential journey, he signed several landmark bills and began implementing financial reforms to bring down the national debt while also focusing on the education and healthcare system in the country.

As a president, Obama’s topmost priority was to stabilize the American economy that has taken an overpowering during the global recession.

On February 17, 2009, Obama signed a $787 billion economic stimulus package for the American Recovery and Reinvestment Act of 2009 that targeted to increase federal spending for health care, infrastructure, education, various tax breaks and Incentives as well as direct a s sistance to individuals.

During his 2011 State of the Union Address, Obama emphasized the importance of innovation economics to make the United States more competitive globally. He signed the Budget Control Act in an effort to control government spending as well as prevent the government from defaulting on its financial obligations, the same year.

Obama became the president at a politically turbulent time and handled numerous military and security issues and authorized a raid on what was believed to be the location of Osama Bin Laden during his presidency.

The operation was conducted by United States Navy SEALs and took a place on May 1, 2011, resulted in the death of bin Laden and the seizure of papers, computer drives and disks from the compound. He also supported same-sex marriages and fought for a for a woman’s right to make her own health decisions in his first term as the president.

During the 2012 presidential election, Obama faced Republican opponent Mitt Romney and won the election. He was sworn in as a president for a second term on January 20, 2013. During his second presidential period, he has sought to normalize U.S. relations with Cuba and has called for full equality for LGBT Americans.

Barack Obama has a blissful married life. He has been married to Michelle Robinson in the year October 3, 1992. His wife Michelle Obama was the 4th first lady of the United States and wife of U.S. President Barack Obama.

Prior to her character as the first lady, she is also a former lawyer, community-outreach worker as well as Chicago city administrator.

The couple has stated that their personal priority is their two daughters, Malia Obama, was born on July 4, 1998, and Natasha (Sasha) Obama, on June 10, 2001.

Obama and Michelle met for the first time in the year 1989, while Obama was working as a summer a s sociate at the Chicago law firm of Sidley Austin. After dating for a three year, the couple exchanged their vows in 1993.

The couple celebrated their 25th anniversary on October 3, 2017.

Barack Obama and Canadian Prime Minister Justin Trudeau went for a dinner at the Liverpool house in Montreal on Tuesday.

The 44th president of the United States, Barack Obama has garnered an incredible amount of net worth from his successful political career. According to Celebrity Net Worth, Barack and his wife Michelle share a net worth of more than $40 million. Obama has an estimated net worth of $12.2 million as of 2017.

However, according to various believable resources that the Obamas could make as much as $242 million post-presidency. According to Newsweek, Obama receives over $200,000 as an annual pension, after leaving the White House.

Further, Obama was also honored with the Nobel Peace Prize that came with a $1.4 million award, which he donated it to on an a s sortment of charity projects.

As a president, Obama received $400,000 yearly as well as continued to earn book royalties.

During his presidential period, Obama contributed a lot for his country and his notable works are following. In order to promote economic growth in the midst of the major global recession, Obama signed a $787 billion for American Recovery and Reinvestment Act.

During his first presidential period, Obama doubled renewable power generation and issued orders to all federal agencies to cut down on their environmental impacts by 2020.