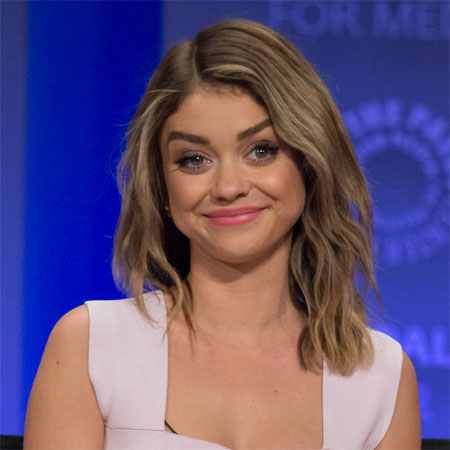 An American actress, Sarah Hyland is famous for playing in the prominent movies including, Vampire Academy, Struck by Lighting, Scary Movie 5 & XOXO. She also won the number of highly acclaimed accolades. These include Screen Actors Guild Award as well as Critics Choice Television Award.

Hyland is born to Melissa Canaday, a stage acting coach and Edward James Hyland, a theater as well as actor. She has a junior brother, Ian Hyland, who is also an actor.

Hyland has been involved in the entertainment industry since she was a child. She is also a dancer and singer as well and began her dance training when Hyland was only 3, and at the age of seven, she started her vocal training.

Along with her dance class members, she was invited to perform at the 'Reel to Real' at Lincoln Center. She went to Professional Performing Arts School in Manhattan and graduated from there in 2008. At the age of eighteen, Hyland moved to Los Angeles, California, to pursue her acting career.

Sarah Hyland has been doing commercials & voice-over work since she was four years old. Her first movie role came in 1997 when she played as Howard Stern's daughter in the movie 'Private Parts.'

Hyland soon acted in two 1998 films, 'The Object of My Affection' & 'Advice from a Caterpillar.' The same year, she made a small appearance in an episode of the short-lived drama series, 'Trinity.'

During 1997-1998, Hyland appeared as "Rain Wolfe," an abandoned child, in the longtime television series, 'Another World.' Later, she works with her foster mother in Amy Carlson, and in some other TV shows including 'Falcone' and 'Law & Order.'

Sarah Hyland is currently dating Wells Adams. They have been dating since November 2017. Adams is an alum of The Bachelor.

Sarah Hyland was currently in a relationship with her 'Vampire Academy' co-star, Dominic Sherwood. They made various public appearances together.

Before that,  Hyland had an affair with American actor, Matt Prokop from 2009 to 2014. They first met while auditioning for 2008 American musical film, 'High School Musical 3: Senior Year', & later worked together on the TV movie 'Geek Charming.'

They lived together for more than five years, after which they broke up following claims that he physically & verbally abused her. She also got a temporary restraining order against Prokop.

When she was nine years old, Hyland was diagnosed with kidney dysplasia, which eventually caused the organ malfunction. She went through kidney transplantation surgery in 2012, when her father donated one of his kidneys.

As a child, Hyland could not go to summer camps because of health issues. Later, she got involved with the Lopez Foundation, which helps children with kidney illness experience.

Having won some achievements & running career-high time of life, Hyland undeniably is a talented actress in the film industry. Till date, she has done some stage acts, appeared in TV series and Films.

All these makes Hyland’s in the high earning celebrities list. As of recent statistics, she has an estimated net worth of $9 million.