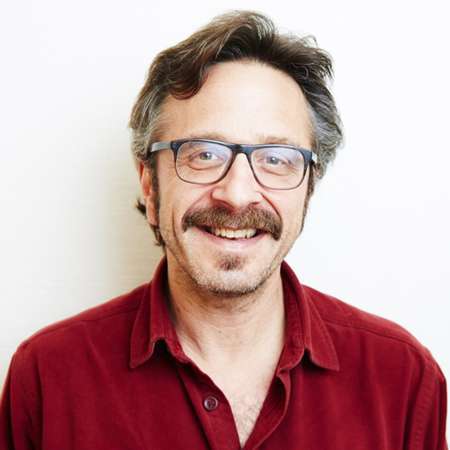 Marc David Maron is the host of “The Marc Maron Show” and also the co-host of “Morning Sedition” and “Breakroom Live” produced by Air America Media. All the shows he hosts is politically oriented. Maron is also an actor, comedian, writer, musician, director, producer, podcaster, and also a webcaster. He has been in this business for over fifteen years.

The podcaster was born on 27, September 1963 in Jersey City, New Jersey. He was raised from a wealthy, Jewish family. His father Barry R. Maron was an Orthopedic surgeon while his mother Toby Maron was a Real Estate broker. He and his family moved to several places due to his father’s job. He lived in Wayne, New Jersey and Pompton Lakes, New Jersey by the age of six. They again moved to Alaska because his father joined U.S Air Force for his medical residency and stayed here for 2 years. After his father left the Air Force, their family relocated to Albuquerque, Mexico. Maron lived here from 3rd grade until he graduated high school.

Talking about his education, he graduated his high school from a public school called Highland High School, Albuquerque, New Mexico.  He then later joined Boston University and graduated with a B.A degree majoring in English in 1986.

In 1987, he first performed as a stand-up comedian. He was of 24 then! He started being active in his career as a comedian at The Comedy Store in Los Angeles and later became a s sociated with his fellow stand-up comedian and actor Sam Kinison. Kinision died on April 10, 1992. Around in 1993-1994, Maron moved to New York, here he appeared several times on Monday open-mic night at the Boston Comedy Club during the mid-1994.

In 2000, he voiced in the episode of Dr. Katz. He also hosted “Short Attention Span Theater” for a short period of time. Maron has done a half-hour recording for HBO, Comedy Central Presents and also Cam Neely Foundation featuring Jon Stewart, Steven Wright, and Denis Leary.

Talking about his acting in films, Maron did a small role as an angry promoter in “Almost Famous”, a film by Cameron Crowe. He also played a role in the 1977 film “Who’s the Caboose?” starring Sam Seder and Sarah Silverman. Maron appeared in the episode of “Girls” as Ed Duffield.

In 2008, in the month of May, he was involved in Stand Uppity: Comedy That Makes You Feel Better About Yourself and Superior to Others, and tour with Andy Kindler and Eugene Mirman. In January 2009, Air America Media produced the webcast of “Breakroom Live with Maron and Seder” hosted by himself and his long-time friend Sam Seder.

In 2012, voiced in the three episodes of “Metalocalypse” as Magnus Hammersmith. He also appeared in “Louie” and “Pamela part:3” as a guest.

Maron created a television series of his autobiography entitled “Maron”. The show is about his life events portraying the difference between his life in television and in real life.

He then began hosting the “The Marc Maron Show” for KTLK in Los Angeles in the year 2006. The show was broadcast online from 11 pm till midnight.

Skipping to his own podcast, Maron launch “WTF with Marc Maron” on 1st September 2009, the show is podcasted twice a week.

Marc Maron has multiple talents, he also played a guitar solo to the protest song and charity single “Party at the NSA”. He had received many positive comments from the musician and critics, to mention a few :- Melissa Locker said: "Marc Maron plays a mean guitar." Spin 's Chris Martins called the guitar solo a "shred-fest" as well as "angular." The Stranger called it "a frequency-fraying guitar solo that's better than you'd expect, although it won’t make J Mascis jealous."

Besides his career and professions, Maron is married twice. First, he was married to Kimberly Reiss in 1997 and divorced in 2001. After three years of divorce, he married Mishna Wolff to become his second wife. Wolff is a stand-up comedian as well. The two of them divorced in 2007. He his then engaged to Jessica Sanchez but unfortunately broke up on october14, 2013. On 2014, he dated Moon Zappa, which he revealed on his episode of a podcast. He then dated artist Sarah Cain in 2015. Maron has no child.

Maron has many stray cats in his house which he took from the street. He public share with the audience several times and even named his house a cat ranch. He is currently living in Los Angeles with his caring cats, monkey, and dogs.

Little known fact about him is that he used to be the victim of drug abuse in the late 1990’s. He finally decided to take the pledge, after almost 9 years on August 9, 1999.

This diversely talented Maron has a net worth $500 dollar and a lucrative salary. He is 5 feet 11 inches in height. His bio is available on Wikipedia. Lastly, do not forget to witness his upcoming movies and tour around the country, Stay tune to get more juice.