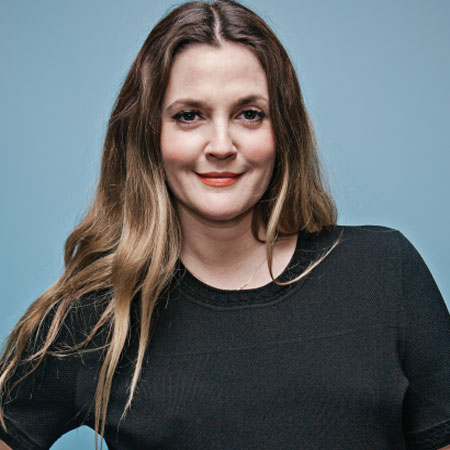 Drew Barrymore is a famous American model, actress, director as well as a producer who rose to fame as a child artist with her portrayal of Gertie in 1982 American science fiction fantasy film, ‘E.T. The Extra-Terrestrial’.

In 2007, PEOPLE Magazine listed Barrymore among the 100 most beautiful people. Barrymore has also been a recipient of the Hollywood Walk of Fame.

Barrymore has married thrice till date.She married Jeremy Thomas in 1995, Tom Green in 2002, and Will Kopelman in 2012 where all her marriages turned into divorces.

Barrymore is born to Jaid Barrymore, a struggling actress then and John Drew Barrymore, an actor. Her parents divorced when she was nine years old. She is one of four children with a half-brother, John, an actor.

At the age of two, Barrymore acted in the TV movie, Suddenly, Love. Her first audition was for Gainsburger Puppy food Commercial in 1986 at the age of eleven.  She has also worked in television commercials.

Drew Barrymore made her debut as a child actor in 1980's American science-fiction horror film, Altered States. A year later, she was cast in one of the highest grossing movies, Steven Spielberg’s ‘E.T: The Extra-Terrestrial.’

In 1984, Barrymore was nominated in Golden Globe award for the best supporting role in a Motion picture category for Irreconcilable Differences.

The same year, at the age of fourteen, she walked into a phase of substance abuse which continued till Barrymore was admitted in a rehab.

In 1995, Barrymore launched her production house ‘Flower Films.’ The following year, she was cast in ‘Batman Forever’ and ‘Boys on the Side’ where both became commercially successful movies.

In 1996, Barrymore made a cameo appearance in American slasher film ‘Scream’ and also starred in American musical comedy film, ‘Everybody says I love you.’

In 1999, Barrymore’s company produced the romantic comedy film ‘Never Been Kissed.’ The movie became a sleeper hit, and Barrymore earned credit as the executive producer.

The next year, Barrymore’s company released an American crime drama television series, ‘Charlie’s Angels,’ in which Barrymore also played a prominent role. This success solidified her standing in Hollywood.

In 2002, Barrymore’s performance in the biopic ‘Confessions of a Dangerous Mind’ was hugely acclaimed, and she received the status of a highly talented actress.

Since 2004, Barrymore has acted and produced various successful movies such as ’50 First Dates’, ‘Fever Pitch,’ ‘Music and Lyrics,’ ‘Lucky You,’ ‘Grey Gardens’, ‘Going the Distance.’

Drew Barrymore’s estimated net worth is $125 million. In the early 2000s, Drew Barrymore was one of the highest paid actresses and reportedly charged around $15 million per movie.

Now, the 50 first dates actress has her own her beauty line and her wine company, Flower Beauty. Barrymore was a co-creative director and spokesperson for Cover Girl for seven years before launching the company, it also added to her income.

In addition, Barrymore has her own production house, Flower movie, which nets her a substantial amount of profit. She has also produced blockbuster movies including 50 First Dates, Charlie’s Angels, Music, and Lyrics and Never Been Kissed.

Barrymore owns several luxury homes and has a fleet of luxury cars. She owns an $8 million home in Hollywood Hills, Los Angeles. She is also the proud occupant of $7 million Mediterranean themed mansion in Montecito, California.

Besides, Barrymore dedicates a lot of time to charity work. She is the Anti-Hunger Ambassador of the UN World Food Program. She has contributed $1 million to that cause. She has also put in a lot of effort for philanthropic organizations including Shops For Charity, the Red Cross, The Rescue Train & ASPCA.

Barrymore has married thrice in her life. She married Jeremy Thomas in 1995, Tom Green in 2002, and Will Kopelman in 2012 where all her marriages turned into divorces.

On 20th March 1994, Barrymore married a bar owner, Jeremy Tomas but they filed for divorced within few weeks and the divorced was finalized in 1995.

During her engagement with Tomas, Barrymore was linked to MTV host as well as a comedian, Tom Green. They got engaged in July of 2000 and a year later, they tied the knot.

However, after being together for one year, they filed for divorce in December of 2001, which was finalized on 15th October 2002.

In 2011, Barrymore dated art consultant Will Kopelman who is the son of Arie Kopelman, a former Chanel CEO. The couple engaged in January of 2012 and got married on 2nd June 2012 in Montecito, California.

On April 2, 2016, the duo released a statement confirming they had separated & intended to divorce. On 15th July 2016, she officially filed for divorce, which was finalized on 3rd August 2016.