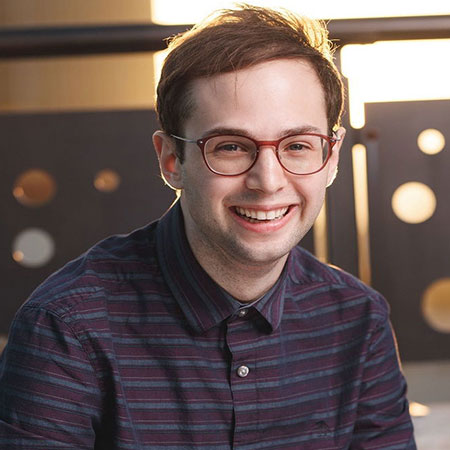 Born and brought up in New York, Zach Kornfeld is an actor, comedian, writer, and producer who rose to prominence since joining "The Try Guys" in 2014. Apart from his presence in the online social media, he has also been part of the sketch comedy show Saturday Night Live. Battling with an autoimmune disease in his late 20’s, Kornfeld rose through his situation and established himself as a renowned celebrity.

Zach Kornfeld was born Zachary Andrew "Zach" Kornfeld on 26 July 1990 in Scarsdale, New York, USA. He has the star sign of Leo which defines him as a limelight-loving, creative, warm and dignified personality. He was born to father Adam Kornfeld and mother Margo Kornfeld. He is American by nationality and as far as his ethnicity is concerned, he is a White American.

As for his education, he completed his primary and secondary education at his local schools and later completed his higher education at Emerson College, where he earned a degree in Bachelor of Fine Arts. When he was in his late 20s, he was diagnosed with an autoimmune disease called ankylosing spondylitis which is marked by severe pain in spine and stiffness.

At the starting of his career, Kornfeld worked as an office PA for the movie Step Up 3D. Apart from this, he worked as a comedy writer too. He became a part of the BuzzFeed team in February 2014. He rose to limelight after appearing in weird and oddly hilarious YouTube videos like If Men Were Disney Princesses.

In the following video, the guys roast each other on Instagram posts and making fun of their social media posts.

The Try Guys don't leave a thing that can make them appear funny; they have tried various things on themselves for their series including putting makeup like celebrities. In the above-shown video, "The Try Guys Recreate Celebrity Makeup Looks Drunk." In the video, they put on makeup like stars such as Rihanna, Kylie Jenner, Jennifer Lopez, and Lady Gaga.

The Try Guys is an online show that started on September 12, 2014, with four members Eugene Lee Yang, Keith Habersberger, Ned Fulmer including Kornfeld. The show was originally owned by BuzzFeed but in 2018. the guys separated from BuzzFeed and started their own company called 2nd Try LLC.

As of 2019, they are still associated BuzzFeed as it owns the rights to the show as a branded content and advertising sales representative. However, the majority of their rights are owned by 2nd Try LLC. After the guys separated from BuzzFeed, they started uploading their videos on their YouTube channel rather than on BuzzFeed channel.

Kornfeld is part of The Try Guys which itself is worth $2 million and due to this we can estimate that he also has a decent net worth, but he has not revealed his exact net worth. Kornfeld earned a good sum of money when he was at BuzzFeed where according to the sources an average employee earns around $65,092 a year.

Zach Kornfeld is in a relationship with a girl named Maggie Bustamante. He announced their relationship on December 12, 2018, after keeping it a secret for 2 years. The couple has a dog together which debuted on his social media in October 2017.

They kept their relationship secret from the media, but the Try Guys knew about them all along. Maggie Bustamante, who remained away from the media has played a great role in Kornfeld's life. She helped him through the diagnosis of his disease.

In September of 2017, he revealed that he was diagnosed with ankylosing spondylitis which is marked by the chronic pain in the back and stiffness. Maggie was with him through the difficulty. The couple hasn't revealed much about their relationship, however, they sometimes share their private moments with their fans and followers on through social media.