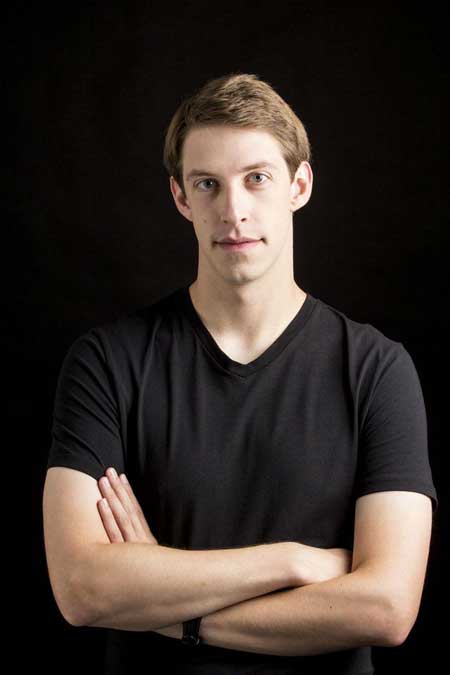 Keith Habersberger is an American comedian, video producer, improviser and development partner who has contributed several videos in the comedy genre. He is also one of The Try Guys members. He is popular for videos where they experiment with a lot of things. Before he started his career as a comedian in the web series, he was working at BuzzFeed as a junior video producer.

Keith Habersberger was born Keith Douglas Habersberger on 18th of June 1987 in Carthage, Tennessee, United States of America. He has the star sign of Gemini and displays its characteristics such as creative, clever, quick-witted, intellectual and fun loving.

Habersberger has not revealed anything about his family but has thanked his mom on a YouTube video. Regarding his siblings, he has two brothers, however, their names have not been revealed in the media yet. Keith is a White American by ethnicity and as far as his nationality is concerned, he is an American.

Which College Keith Habersberger Went To?

Keith studied at his local schools and completed his higher education at Illinois State University. He graduated in 2008 with a degree in acting from the School of Theatre and Dance.

Habersberger’s professional career started as an improviser for Mission Improvable Touring Company in July 2009. He left the job in December 2012. While he was working as an improviser, he also worked at College Improv Tournament, Chicago Improv Productions as a producer in which he stopped working in June 2013.

He was involved in multiple profession at the same time when he started his career. Then, he worked as an editor, producer, and actor at Octavarius. In July 2010, he became a producer and editor in Octavarius. Finally, he joined BuzzFeed in January 2014 as a Junior Video Producer and is still working there. While he was working in BuzzFeed, he started his journey in the Try Guys which brought him into the stardom.

The Try Guys is a show starring of Eugene Lee Yang, Keith Habersberger, Ned Fulmer, and Zach Kornfeld. They are video producers, creators, and actors who create comedy videos and upload in their eponymous YouTube channel. In the show, they try some absurd tasks like wearing makeup of stars like Rihanna, Kylie Jenner, Lady Gaga and Jennifer Lopez. Their unique presentation in the web series attracted several viewers and soon, the show emerged as one of the most loved web series.

CAPTION: A picture of The Try Guys. SOURCE: The Social Stream

The video shown below is one of their most viewed videos on YouTube where they tried who among them was more good-looking.

The show started on September 12, 2014, and was initially produced under BuzzFeed, but the guys started their own company called 2nd Try LLC in 2018. As of January 2019, the show is under 2nd Try LLC. BuzzFeed still owns the rights of the show as a branded content and advertising sales representative.

Do The Try Guys Still Work At BuzzFeed?

Habersberger is undoubtedly an icon when it comes to the online comedy community, where he has already established himself. He has also ama s sed a big net worth of $200,000from from his career as a web-series star as well as a social media star.

His various other projects have helped him gather a decent net worth. Typically, YouTubers earn from ad revenue which is estimated to be around $10,000 for every 100,000 views.

Habersberger along with other Try Guys members have been getting huge attention for their web series which in future will definitely help the guys in making multimillion dollars fortune.

Habersberger is a married man, he got married to Becky Habersberger in September 2017. Apart from this, he hasn’t revealed anything about his personal life. Due to his secretive nature, there is no information about his relationships prior to his marriage with Becky.

Becky is a freelance makeup artist and got famous for her posts on Instagram in which she has more than 140,000 followers. She is especially talented when it comes to making fake wounds and scars. Some of her posts frequently feature stars like Emma Roberts.

How tall is Keith Habersberger?

According to the sources, Keith Habersberger stands at the tall height of 6 feet 3 inches