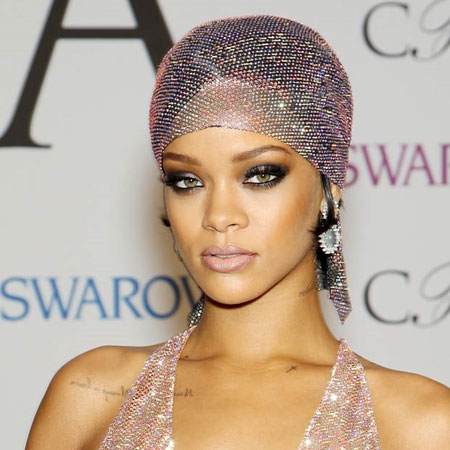 International pop star Rihanna is a Barbadian singer, actress, and songwriter. She is widely known for her all-time hit songs such as 'Umbrella,' 'SOS,' 'We Found Love,' and 'Diamonds.'

Rihanna was born on 20 Feb 1988 in St. Michael Parish on the Caribbean island of Barbados. She is the eldest daughter born to Ronald Fenty, a warehouse supervisor and Monica Fenty, an accountant. She is black German in ethnicity. She has three siblings.

Move to the United States

As a teenager, Rihanna turned to singing at home, as a release from her troubles. She then formed a group with her two classmates, at their age of fifteen years, Rihanna's group scored an audition with music producer Evan Rodgers, who visited the island with his wife.

Rogers was pretty much impressed by the talented Rihanna, to the unfortunate detriment of her two friends. About a year later, when she was sixteen years of her age, she left Barbados to shift in with Rogers and his wife in Connecticut and worked on a recording demo album.

Rihanna stated ''I wanted to do what I had to do, even if it meant moving to America.''

In 2005 January, Rogers landed Rihanna an audition for Def Jam records and its new president, the legendary rapper Jay-Z. She said, ''I was in the lobby just shaking.''

After she gave an audition, the president Jay-Z was astonished by her vocals and signed with her on the spot. After eight months, in August 2005, Rihanna released her first single, ''Pon de Replay,'' a reggae-influenced club track that reached No.2 on the Billboard singles chart and also announced Rihanna as the next up-and-coming pop star.

Rihanna's first album 'Music of the Sun,' was released later that month which reached on No.10 on the Billboard albums chart and also featured the single 'If it's Lovin' That You Want.'

She released her second album, 'A Girl Like Me, the next year with her two major hits 'SOS' and 'Unfaithful,' her first No.1 single.

The album peaked at No.2 on the chart and also featured the singles 'Don't Stop the Music,' and 'Shut Up and Drive,'' with the latter featuring a sample of Michael Jackson's 'Wanna Be something.'

'Good Girl Gone Bad" Reloaded' was released the following year and scored further hits in 'Take a Bow,' 'Disturbia,' and 'Hate That I Love You.'

Carrying on her onslaught of hit albums, Rihanna released Rated R in the year 2009 with the singles 'Rude Boy,' and 'Hard.' Rihanna's 2010 album, 'Loud' was once again a commercial success behind the songs 'Only Girl (In the World),' What's My Name,' and 'S&M.'

Besides her list of hit songs, Rihanna is also seen featuring several popular songs by other artists. The songs include Eminem's 'Love The Way You Lie,' Jay-Z's 'Run This Town,' Kanye West's 'All of Lights,' and Maroon 5's 'If I Never See Your Face Again.'

In early 2012, two collaborations featuring Rihanna have released: Coldplay's 'Princess of China,'' from their album Mylo Xyloto. The same year in Feb, Rihanna won her third Grammy Award for the Best Rap/Sung Collaboration at the 2012 Grammy Awards for her Kanye West Collaboration.

Rihanna has also starred as Perry Officer Cora Raikes in her first theatrical feature film Battleship, which was released on 18 May 2012. Loosely based on the game of the same name, both the film and Rihanna's performance received mixed reviews.

On 19 August 2012, Rihanna made her appearance in the first episode of the second season of Oprah Winfrey's American prime time television show Oprah's Next Chapter. The episode scored the second-highest ratings in the history of the Oprah Winfrey Network.

Later in November 2012, Rihanna released her seventh studio album, Unapologetic. The album debuted number one on the Billboard 200 albums chart in U.S. with first-week sales of 238,000 copies, marking her first number one record in the country.

The album's second single,'Stay' featured with Mikky Ekko, reached the top five in over twenty countries, including number three on the Billboard Hot 100. AS Promotion before the album's release, Rihanna embarked on the 777 Tour, a mini tour of seven shows in seven countries in a week.

On 6th May 2013, Fox showed a documentary about the tour, with a documentary DVD being released the following day as Rihanna's third live-long form video release.

Later in 2013 Feb, at the 55th Grammy Awards, Rihanna won her sixth Grammy Award, in the category Best Short Form Music Video for 'We Found Love.' That month, the Official Charts Company in the UK announced that Rihanna had sold 3,868,000 records in the past year.

In October 2013, Eminem released his single featuring Rihanna, 'The Monster,' as the fourth release from his eighth studio album The MArshall Mathers LP 2. The song entered the UK Singles Chart at number one, Rihanna joined

The Beatles and Elvis Presley as just one of three acts to have scored a number one single each year over seven consecutive years in the chart's history.

The song also peaked number one on the US Billboard Hot 100 and marked Rihanna's thirteenth chart-topper, tying her at the time with Michael Jackson for the fourth most number ones in the chart's history.

Later Rihanna made her appearance on Shakira's single, 'Can't Remember to Forget You,'' which was released Jan 2014.

In 2015 August, NBC announced that Rihanna would be the key adviser on The Voice's ninth season. The same year she contributed vocals to the single, 'FourFiveSeconds,'' a collaboration with West and famed Beatle Paul McCartney, as well as releasing ''B**** Better Have My Money,'' a tune inspired by court wranglings with her former manager.

In Late Jan 2016, Rihanna released her next album Anti, allowing Jay-Z's online streaming site Tidal to feature the collection of track for a week exclusively. The gamble paid off for the struggling service, with one million trial subscribers joining Tidal less than a day to partake in a download promotion for Anti.

Rihanna has made headlines in her personal life, although sometimes for circumstances beyond her control. Rihanna made her first gossip column headlines in 2006 when rumors swirled that she was in an affair with the famous rapper Jay-Z.

Both she and Jay-Z have always ignored such allegations as ridiculous. Rihanna said, 'At first I was like, Ha Ha, it's funny.' 'Now I just ignore it, and I'm numb to it. You cannot stop people from saying what they want to say.'

Rihanna again made headlines in 2009, becoming the center of a media firestorm after a domestic violence incident in which her ex-boyfriend Chris Brown assaulted her before an awards show.

On 5th March 2009, Chris Brown was charged with assault and making criminal threats. Due to a leaked photo from the police department obtained by TMZ.com, which revealed that Rihanna had sustained visible injuries.

Later from 2009 to 2010, Rihanna was in a relationship with Dodgers baseball player Matt Kemp. She has also dated a Canadian rapper Drake. In Jan 2013, in an interview with Rolling Stone, Rihanna confirmed that she had patch-up with Chris Brown, though he remained under probation for the 2009 domestic violence incident.

However, in 2013 May, Chris confirmed separation between him and Rihanna. Later in 2015, Rihanna dated for a short time with a rapper from Missouri City, Travis Scott.

Rihanna earns an enormous amount of money from her successful career as a singer and songwriter, as she has given numerous all-time hit songs such as 'We Found Love,' 'Stay,' 'Umbrella,' and 'Diamonds.'

Rihanna has pretty expensive and luxury cars like Lamborgini, Porsche, SLR McLaren, currently costs $75,000, and Mercedez Benz. Moreover, She lives in a luxury mansion worth of $ 22 million.