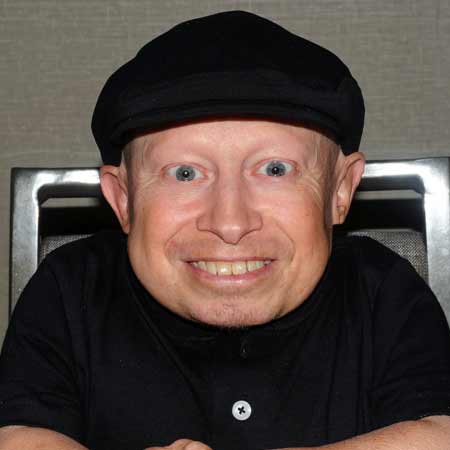 American actor, stunt performer, and comedian Verne Troyer came to limelight as one of the shortest men in the world with a height of 2 ft 8 in (81cm); the result of a rare genetic disorder, Cartilage-hair hypoplasia. He made his Hollywood debut in 1994 from the movie, Baby’s Day Out and rose to fame for his role Mini-Me in the Austin Powers Franchise. He was also popular for his work in Harry Potter and the Sorcerer’s Stone.

Verne Troyer was born on 1st January 1969 in Sturgis, Michigan under the birth sign Capricorn. Troyer was American as per nationality, and as far as his ethnicity was concerned, he was White-American. He was the son of Susan (a factory worker) and Reuben Troyer (a repair technician). His parents raised him with his older brother, Davon and younger sister, Deborah.

Troyer graduated from Centreville High School in1987. He was raised Amish until his parents left the religion. His parents never discriminated him despite his condition. He says,

‘’ never treated me any different than my other average-sized siblings. I used to have to carry wood, feed the cows and pigs and farm animals.’’

Verne Troyer made his Hollywood debut in 1994 from family comedy adventure film, Baby’s Day Out directed by John Hughes. The former president of Little People of America offered him to serve as a stunt double for the infant character Baby Bink.

Troyer then worked as a stunt double in movies like Jingle All the Way, Dunston Checks In, My Giant and Men in Black. In 1999, he appeared as Mini-Me in the spy action comedy film, Austin Powers: The Spy Who Shagged Me. Jay Roach, the director of the movie, was impressed by his performance so, re-wrote the script again, as a result, he appeared in several Austin Powers Franchises.

In 2001, he worked as Griphook in the movie, Harry Potter, and the Sorcerer’s Stone. His latest film is Gnome Alone where he appeared as The Gnome.

Troyer also appeared in several TV shows like Celebrity Juice, Friday Night with Jonathan Ross and Whose Line Is It Anyway?.

Verne Troyer was reported to be married to model Genevieve Gallen on 22nd February 2004 but he filed an annulment the next day. Troyer and his lawyer filed the case stating there was no formal wedding.

"There is no valid marriage. That's why we're asking for an annulment".

On 25th June 2008, a home video of him and his girlfriend, Ranae Shrider’s sex tape was leaked by TMZ and Shrider which was filmed in Beverly Hills, California and Shrider’s hometown of Fort Cobb, Oklahoma. He then sued TMZ, Blatt and Super DVD for $20 million to block the distribution of the tape.

Troyer was also in a relationship with Brittney Powell, a German-American actress.

He was diagnosed with Cartilage-hair hypoplasia which is a rare genetic disorder. The disorder helped him to get listed in world smallest persons. Besides, he was an alcoholic. He had admitted going to rehab to undergo treatment for his addiction.

On 21st April 2018, Verne Troyer died at the age of 49. Earlier month, he was taken to the hospital after an emergency call reported he was drunk and suicidal. Furthur details of his death have not been revealed to media.

Here is the video which shows five facts about Verne Troyer: