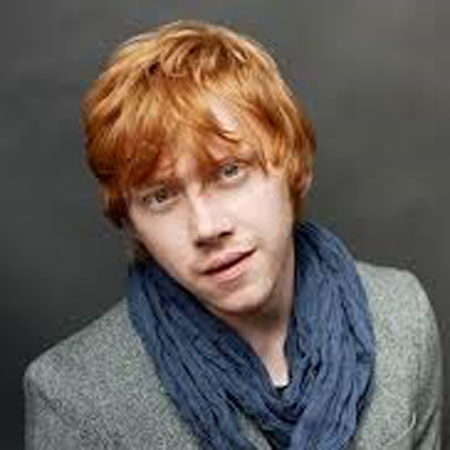 Rupert Grint is a British film and television actor who rose to fame as Ron Weasley, one of the three protagonists in the Harry Potter film series and Harry’s partner in crime in Hogwarts. He won a Young Artist Award for Most Promising Young Newcomer for his role as Ron Weasley in Harry Potter and the Sorcerer's Stone. He also starred in the films Driving Lessons and Cherrybomb.

Rupert Grint was born Rupert Alexander Lloyd Grint on August 24, 1988, in Harlow, Essex, England, under the birth sign Virgo. His mother, Jo Grint, is a homemaker and his father, Nigel Grint, is a racing memorabilia dealer. Rupert belongs to British nationality and ethnicity wise, he is a Caucasian.

As a schoolboy, Grint was an avid fan of J.K. Rowling's Harry Potter series. He also says that his first dream in life was to become an ice cream man. He recalls,

"When I was younger I had sort of—always seemed like a really cool job to be an ice cream man. And I thought, why not?"

During his school years, Grint performed in a number of school productions and joined the Top Hat Stage. He left school to focus on his acting career at the age of 16. He attended the Richard Hale Secondary School in Hertfordshire. The actor later commented,

As a schoolboy, Rupert Grint gained a huge public attention for his unruly bright red hair. He was an avid fan of British-American film series Harry Potter. He decided to audition for the part of Harry Potter when he heard about an open casting call for the film adaptation.

Harry Potter and the Sorcerer's Stone opened in 2001. Currently, the film stands as the eighth highest grossing film in history, having sold over $974 million in tickets throughout the world.

After the huge success of the first Harry Potter movie, Grint, Daniel Radcliffe, and Emma Watson became an international celebrity. After that, Rupert says he was initially uncomfortable with his newfound fame.

"The strangest moment was when I went back to school to finish my exams after filming the first movie. All the kids cheered and clapped when I walked in."

"I never took myself too seriously. I come from a very normal background and I'd like to think I've never stopped being normal."

In addition to his work in the Harry Potter films, Rupert Grint has also made his remarkable appearances in a number other films like Thunderpants, Driving Lessons, and Cherrybomb as well.

The 28 years old, Rupert Grint is a renowned actor in Hollywood. He is

Rupert Grint is unmarried but has been romantically involved with several Hollywood divas. He dated Katie Lewis in the year 2004 but the most anticipated couple split up after a dating of 4 years.

2015 French comedy film Moonwalkers star, Rupert again involved in a relationship with Lily Allen, is an English singer, songwriter, actress, and television presenter for a year in 2008.

There are also rumored that Rupert engaged 31 years Welsh actress Kimberley Nixon in the year 2010. However, the coupe both didn’t share about their dating or love affairs in front of the Media.

After having multiple breakups, Rupert eventually met British actress Georgia Groome in 2011. After that, the dating life again flourished for Lucas Neff. Although the couple separated in the same year, they’ve been in a rumored on-again-off-again relationship since 2011.

He proved to be on very friendly terms with his ex-girlfriend Georgia as they attended West Hollywood hotspot Craig’s for dinner in March 2017. Other than that, the actor Rupert Grint shared a much-anticipated onscreen kiss with actress Emma Watson in Harry Potter and the Half-Blood Prince.

"I've never been seriously involved with anyone. I've certainly never been in love. I've always preferred to keep things casual. I'm not seeing anyone now and I don't feel the need to have a girlfriend."

Again he adds about his taste in women,

"I tend not to go for the very pretty ones. I prefer the quirkier types, the ones who are a little weird. But when it comes to girls, I'm quite insecure."

Besides, he is a unique caricature artist and can create any solid impression within 60 seconds. He loves all kinds of music but his favorite is cla s sic rock and roll.

Moreover, he is an animal lover and owns two Labrador retrievers—Ruby and Fudge. He is also arachnophobic and is scared of spiders!

Rupert Grint became a superstar at quite an early age after the release of his first movie ‘Harry Potter and the Philosopher’s Stone’. He then gave numerous successful movies and portrayed the major character in several TV shows including Cross of Honor, Postman Pat: The Movie, Moonwalkers, Snatch and many others.

As of 2018, he has an estimated net worth of $50 million, by celebrity as well as richest net worth.

This kind-hearted actor Rupert Grint is also engaged with various charity events. He has donated items like clothes to charity auctions. Moreover, he participated in the Wacky Rally in 2010 with James and Oliver Phelps, which raised money for Britain’s Royal National Lifeboat Institution.