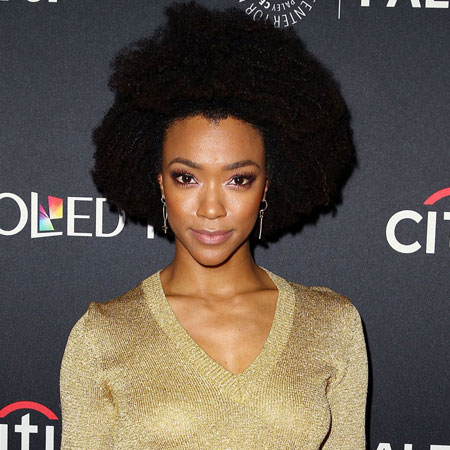 Saturn Awards nominated American actress, Sonequa Martin-Green is well recognized for her role Sasha Williams in the TV series, The Walking Dead. She appeared in the TV series from 2012 to 2017. As of 2018, she is portraying the lead role Michael Burnham in the CBS’ series, Star Trek: Discovery. Martin-Green is also known for her works in several popular TV series including The Good Wife, Once Upon a Time and New Girl. Apart from TV shows, she has also worked in several independent films like Not Quite Right, I-Can-D, Toe to Toe and Da Brick.

Martin-Green is a married woman. She tied the knot to actor and writer Kenric Green in 2010. The couple welcomed their first child; a son, Kenric Justin Green II in 2015.

Sonequa Martin-Green was born Sonequa Martin on 21st March 1985 in Russellville, Alabama under the birth sign Aries. She is American by nationality and belongs to African American ethnicity. Her parents, Charles Martin and Vera Martin raised her with her one sister and three older half-sisters.

Martin-Green used to be a salutatorian (a student ranking second highest marks) in her school. When she was in the tenth grade, she planned to become a psychologist. By the age of 16, she discovered her interest in acting.

"I didn't know I was going to be an actor until I was 16. I thought I was going to be a psychologist, which is interesting because it's very similar to acting. I was fascinated with human behaviour and why people do what they do. I was in the middle of rehearsal in 10th grade when I had this epiphany. And so I got my theatre degree from the University of Alabama."

In 2007, she graduated with a degree in theater from the University of Alabama.

Sonequa Martin-Green made her big screen debut in 2005 as Coco Delight in the movie, Not Quite Right. Two years later, she appeared in I-Can-D. In 2009, Martin-Green worked in the drama film, Rivers Wash Over Me with Darien Sills-Evans, Elizabeth Dennis, Derrick L. Middleton and Duane McLaughlin.

Martin-Green’s other movies include Toe to Toe, Blind Thoughts, Da Brick, Yelling to the Sky and Shockwave Darkside.

She then worked in several TV series including Army Wives, Gossip Girl, NYC 22 and Escape. Particularly, she is famous for her roles in:

As of 2018, Martin-Green in working in the CBS’s TV series, Star Trek: Discovery created by Bryan Fuller and Alex Kurtzman in the lead role. For her performance, she has been nominated for Saturn Award.

According to Celebrity Net worth, Sonequa Martin-Green has an estimated net worth of $2 million. As per the report, her salary was $300k per episode in the post-apocalyptic horror television series The Walking Dead. Besides, she has been part of several hit series including Star Trek: Discovery from which she earns a decent amount of money.

Sonequa Martin-Green is a married woman. Martin-Green tied the knot to fellow actor, Kenric Green. The couple first met while working together in the theater play, Fetch Clay, Make Man at the McCarter Theater.

During the fifth season of The Walking Dead, Martin-Green was pregnant with her first child. On 10th January 2015, the pair welcomed their first child, Kenric Justin Green II in LA. She named their child after her husband’s name.

Along with being an aspiring actress, she is also a good wife and a proud mother. Despite her busy schedule, she always makes time for her family.