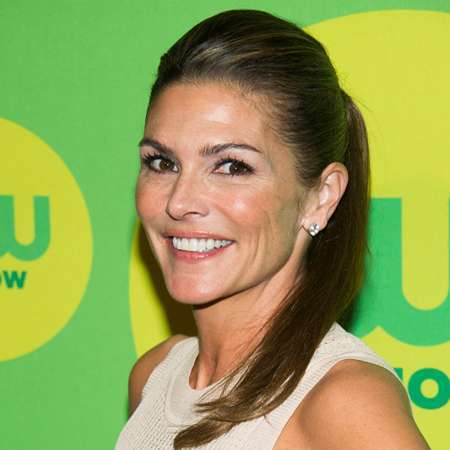 Paige Turco is a popular American actress and model. She is best known for her appearance in the American live-action film Teenage Mutant Ninja Turtles II series. Her other notable roles include Melanie Cortlandt on the ABC soap opera All My Children, Terri Lowell in the CBS series The Agency, and appearances in American Gothic, NYPD Blue, Party of Five, The 100, and Person of Interest. The actress has been married Jason O'Mara from 2003-2017. They had one child together.

Her parents were Native American. Her nationality is American. And according to her ethnicity, she is White.

Paige Turco went to  Walnut Hill School in Natick, Ma s sachusetts, and performed solo dances at various venues. Her ankle was later injured due to which she couldn't pursue a professional career in ballet dancing.

Then, she attended Bay Path College which is located in Longmeadow, Ma s sachusetts and she graduated from there in 1987. Later she joined the University of Connecticut and she majored in drama.

Career Recognition From 'Guiding Light' and 'All My Children'

Paige Turco made her debut from the television series Guiding Light (1987-1989, 27 episodes) where she was featured as series regular in the character of Dinah Chamberlain., featuring Kim Zimmer, and Beth Chamberlin.

What Role Did Paige Portray In 'The 100'? Why Did She Leave The Series?

In 2018, the actress worked in the film Separated at Birth and made her most recent film appearance in Books of Blood (2020).

Paige Turco's Net Worth And Earnings

Without a doubt, a successful career journey of more than 3 decades since her TV debut in 1987, Paige collected a hefty fortune along with fame. According to Celebrity Net Worth, Turco has a net worth of $5 million as of 2021- thanks to her acting career that records 46 acting credits (TV series & films).

As for her salary, Paige Turco barely has opened up her actual payroll, but she allegedly did collect a payroll in 6-digit figure per episode from TV works. She notably worked in Guiding Light, All My Children, The Agency, and The 100.

She has appeared in the movies such as Rhinoceros Eyes, Invincible, The Game Plan, The Step Father, and The Favor.  Turco was cast alongside Mark Wahlberg, Greg Kinnear, and Elizabeth Banks, among others in the movie Invincible. The movie grossed 58.5 million at the box office. She appeared alongside Dwayne Johnson, Kyra Sedgwick, and Morris Chestnut, among others in the movie, The Game Plan that grossed $146 million worldwide at the box office.

Paige Turco is a very beautiful lady and she has a very attractive personality. She has not been in relation with many guys in the past and there are no rumors relating to her dating in the present.

However, Paige Turco was in a marital relationship with her boyfriend-turned-husband Jason O'Mara. They began dating in 2003 and after a couple of months, the duo married on September 19, 2003, in a private ceremony. Together, they welcomed a child, a son named David in 2004.

After living together for 14 years and officially announced the divorce on May 1, 2017, citing "irreconcilable differences" as the reason for the split. She then requested joint legal and physical custody of their son along with spousal support from husband Jason O'Mara.

From a religious point of view, she is Roman Catholic. Currently, she lives single life in Springfield, Ma s sachusetts along with her son. She is rarely seen in public spots following her divorce from her ex-husband Jason.

Likewise, she also prefers not to reveal the details of her relationship to the public and the media. Paige is active in social network site Facebook and micro-blogging site Twitter but there are no pictures of her with anyone.