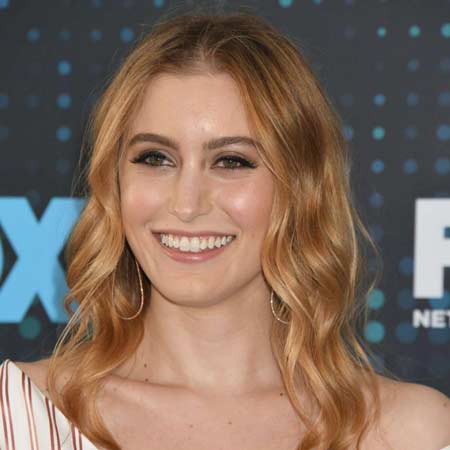 American actress, Olivia Macklin is known for her appearances in English-language Italian drama television series, The Young Pope (2016), an American sitcom, LA to Vegas (2018). She recently signed for the TV show which is bound to add more experience in her young career. She played the lead role in the series including “Sex & Drugs & Rock & Roll,” the film “Radium Girls” and the theater production “Horse Girls.” As of 2018, Macklin is dating Christian Eble and often posts pictures of each other on their Instagram account. Macklin is originally from Chicago, IL, and received her B.A. in performance from Fordham University in 2015. She currently resides in New York City.

Olivia Macklin was born Olivia Leigh Macklin on 16th March 1994 in the United States of America. She belongs to White ethnicity/race and holds American nationality. Further information about her parents and siblings are not revealed.

Macklin studied at New Trier High School in Winnetka. She then graduated from the Fordham University in northern suburbs with a B.A. in theatre performance.

Olivia Macklin began her career, appearing in 2014 video Nothundoras: Springbreak, alongside Joe Flynn, and Taylor A. Purdue. She then appeared in an episode of 2015 American comedy television series, Sex & Drugs & Rock & Roll as Emma.

Macklin also made her appearances in American television mockumentary family sitcom, Modern Family as Nichole. The interesting fact is her mother and the executive producer of the show Steve were cla s smates in high school. The series was starred by many actors including Ariel Winter, Sarah Hyland, Sofia Vergara, Julie Bowen, Ty Burrell, Jesse Tyler Ferguson, and Nolan Gould, among others.

In 2016, Macklin acted in English-language Italian drama television series, The Young Pope as Madre. Her most recent screen appearance was in an American sitcom, LA to Vegas where she played the character of a stripper who usually boards the Jackpot Airlines for her work.

The actress played the role in the TV series Dead to Me, in 2019.

Olivia Macklin’s Net Worth And Salary

Olivia Macklin has an estimated net worth of six-figure, but the exact amount is not revealed yet. She is making money from her acting career. The actress has worked in a number of movies and TV series.

As per some online sources, the average income of the cast of LA to Vegas is $72k. So it can be a s sumed that her salary is also around $70k per season.

Olivia Macklin is in a romantic relationship with Christian Eble since 2017. They often post photos of each other on their respective Instagram account. She currently resides in New York City.

On 15th February 2017, Macklin posted a picture where she was seen on the arm a mystery man and captioned the photo, “Love You, Valentine.” The name of a mysterious man is Izzy Comet, but when she started dating Christian she deleted all the pictures with Izzy from her Instagram.

Let's check out the interview with Olivia Macklin