The 35 years old,  Nikki Bella who has already moved on from her past relationship with ex-fiancé John Cena, won't run into him at events. Bella is avoiding WrestleMania 35 which will be held on Sunday, April 7.

She said to the US Weekly,

I never thought the man of my dreams was gonna ask me to marry him and he did. So it’s still a bit sensitive for me.

Well, she was referencing John's proposal to her at WrestleMania 33 in April 2017. The Total Divas star said that she has seen him several times after break up but she will not attend WrestleMania 35 which will be held at the MetLife Stadium in New Jersey.

The WWE stars, John and Nikki started dating in the year 2012. After five years, Cena popped the question for getting married in 2017  at WrestleMania 33. 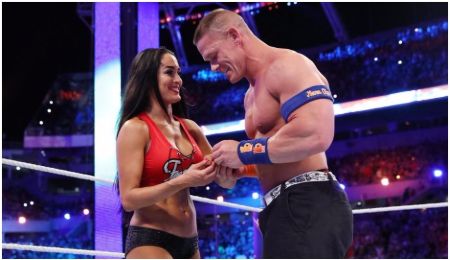 The couple, however, called off their relationship in March 2018 and two months later, they reconciled and again split up in July.

After break up, Nikki started dating Artem Chigvintsev (Dancing With the Stars pro). The US magazine confirmed their relationship in January 2019 and the former wrestler openly shared about their romance in March.

Yeah, we’re dating. There’s been a lot of speculation about us … but I’m still dating [other people] … We’re not engaged. We’re not married. We’re not boyfriend and girlfriend. We don’t say, ‘I love you.’ We make out. He’s a great kisser.

Recently she said that she is enjoying her new dating life. She said,

Continuing the statement, she said,

I'm not looking to be serious with anyone right now. I'm just looking to have fun. So I'm just in a fortunate position that I get to go on these dates with a lot of amazing guys. I mean, not a lot. It's only been a few.

Hope, Nikki, and her new boyfriend Artem have a strong bond in the coming days. We wish them good luck with their romantic relationship!