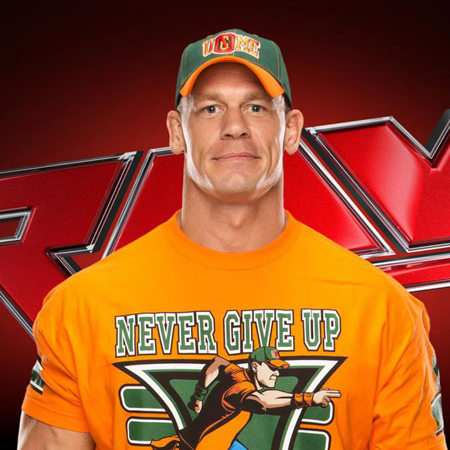 John Felix Anthony Cena aka John Cena is a WWE star and a reality TV presenter as well. He is one of the most successful and most searched professional wrestlers in the world. He has presented himself as a successful rapper and actor as well. He is signed to WWE and performs on the SmackDown brand under his ring name, John Cena.

Cena started his professional wrestling career in 1999 with UPW (Ultimate Pro Wrestling). He has appeared in numerous films including The Hangover Part III, Daddy’s Home, and Blockers.

Cena was born as John Felix Anthony Cena Jr. on April 23, 1977, in West Newbury, Massachusetts, United States of America. He was born to Carol Cena (his mother), and John Cena Sr. (his father).

Cena is an American nationality and is of White-American ethnicity. Cena is the second son of a total of five children of his parents. He has four brothers, Dan, Matt, Steve, and Sean. He is the maternal grandchild of Tony Lupien, a famous baseball player.

Cena attended Cushing Academy and earned a graduate degree. Cena joined Springfield College in Springfield, Massachusetts. During his college life, he was on the college football team, where his number was 54. In 1998, he graduated from Springfield with a degree in exercise physiology.

Cena then won several titles and matches. In 2007, the pro wrestler became one of the first wrestlers to get victory over Edward ''Umanga'' Fatu.

As of 2018, he was eliminated from the annual Royal Rumble match by the eventual winner, Nakamura. Besides his wrestling career, he has also been featured in movies in guest characters and also in the lead role.

He made his film debut in the 2000 movie Ready to Rumble. Later in 2006, he appeared as the main character in the movie The Marine as John Triton.

Cena has also acted in films like Fred: The Movie, Fred 2: Night of the Living Fred, Fred 3: Camp Fred. He has also appeared in many television series and video game series too. Cina has also provided his voice in different songs. in 2017, he lent his voice to the animated movie Ferdinand.

As of 2018, Cena is working in movies, Bumblebee, The Voyage of Doctor Dolittle, and the TV series, Rise of the Teenage Mutant Ninja Turtles, Dallas & Robo.

Besides, Cena is also involved in music. In 2005, he released his debut album, You Can't See Me which hit the charts of the UK and the US.

Here are the top 10 featuring movies by John Cena listed by IMDB.

John Cena has won several championships and titled in WWE which include:

Some of his honors include:

He earns a huge amount of salary of around $8 million annually from his wrestling career. He has maintained a huge net worth of $55 million according to the Celebrity Net Worth as of 2020.

He is currently a free agent and performs for both Raw and Smackdown brands. In 2017, Forbes listed him as the second-highest-paid wrestler after Brock Lenser with earning of $12 million.

He has amassed a huge amount of net worth from his wrestling career, acting career, and multi-million endorsements contact with several brands like YJ, Stinger, Subway, Capri Sun.

He also makes a huge amount of money from his endorsement deals. Cena appeared in the commercial for Gold’s Gym. He also endorsed the energy drink, YJ Stinger. He has endorsed several brands like NASCAR, energy bars, and Fruity Pebbles and Pistachios.

Where The Prominent Wrestler Lives?

John Cena resides in a lavish mansion in Tampa, Florida. He has a 13153 sq ft. mansion in Land O’Lake, Florida. He bought the house for $3.4 million. He also has a $437300 home in New Westbury. He also has two lavishes watch Girard Perregaux BMX Laureato- price $6395 each.

He also has a collection of lavish cars including:

He is one of the most searched professional wrestlers in the world. John is a very good-looking wrestler with short black hair. He has dark brown hair.

Cena has also been involved in several charitable works and movements. He is involved with the nonprofit organization, Make-A-Wish Foundation. He provided over 500 wishes for children suffering from life-threatening illnesses via the organization.

He also promoted Breast Cancer Awareness month in 2012. In 2016, he appeared in a public service announcement, We are America, sponsored by the Ad Council, as part of its Love Has No Labels.

WWE superstar dated former Nikki Bella from 2012-18. Cena and Bella went on the first date in 2012. She recalled her moment in a 2013 interview with TribLive Radio.

The first opening line was, 'Hey, do you want to go to dinner with me?' and I was kind of like, 'What? With me? It just kind of started out like a dinner date and I have to admit we were friends for so many years, but then when you make it romantic, I couldn't even say a word to him.

Then, she moved with him and revealed their affair publicly. The couple broke up for some months due to several misunderstandings but are finally together and living happily. In April 2017, Cena proposed to Nikki at WrestleMania 33 where their engagement took place.

He made an idea to get married to Nikki as she was extremely excited and happy after John’s decision. According to the sources, Nikki Bella was happy to get the ring from John and is within the superb idea of John.

As of 2018, Cena agreed to make a life-changing decision to save his relationship with Bella. The couple discussed having children. Cena revealed that he is going to get his vasectomy reserved.  He told,

I physically can’t have kids,” Cena, 41, said in Sunday’s episode. “So I’m also telling you that I’m willing to have surgery and then still go through with being a dad.

They broke up in April 2018. The couple called off their engagement one week before their pre-deciding wedding. They split up after six years together. The two also sparked the rumor they reunited after a month of their calling off. Bella and Cena appeared face-to-face on the E!'s Sunday episode of Total Bellas.

After having a long-term misunderstanding in a relationship with his wife, they divorced on July 18, 2012. Cena case the file for their divorce. He does not have a child with her.

Cena is 42-year-old as of 2020. He resides in Tampa, Florida, U.S. He has earned massive popularity working in various fields such as acting, wrestling, hosting, and as a rapper.

The WWE superstar John Cena is currently dating his girlfriend Shay Shariatzadeh. The couple also packed on the PDA at the Dolittle premiere at the Regency Village Theatre on 8th Feb.

Talking about his personal life he is very good-looking. Being such a great wrestler, he is very kind and helpful according to his friends. He is a big fan of the English Premier League club Tottenham Hotspur. Cena collects muscle cars he has collected over 20 cars.