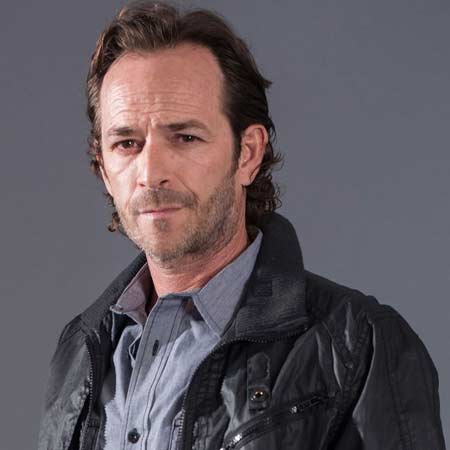 American actor, Luke Perry is popularly known for his role as Dylan McKay in the TV series, Beverly Hills, 90210 from 1990 to 1995 and again from 1998 to 2000. He is also well known for his role as Fred Andres in The CW’s teen drama series, Riverdale.At the initial phase of his career, he gave 215 auditions before finally landing a TV commercial. Perry is a divorcee. He was married to his actress girlfriend, Rachel Minnie Sharp from 1993 to 2003. The couple shares two children, Jack and Sophie Perry.

Luke Perry was born Coy Luther Perry III on 11th October 1966 in Mansfield, Ohio under the birth sign Libra. Perry is American by nationality and belongs to White ethnicity. He is the son of homemaker mother, Ann Bennett and steelworker father, Coy Luther Perry, Jr. In 1972, his parents divorced and he was raised by his stepfather, Steve Bennett.

He has a brother, Jack Perry, a sister Amy Perry and a half-sister, Emily Bennett. Perry attended Fredericktown High School.

When he was young, he worked as a paver in order to pay for his acting classes. At the beginning of his career, he gave over 215 auditions before finally getting a job in a TV commercial. He also appeared in the music video Be Chrool to Your Scuel by Twisted Sister alongside  Alice Cooper.

Luke Perry made his Hollywood debut in 1982 from science fiction TV series, Voyagers!. In 1987, Perry appeared as Ned Bates in ABC’s soap opera, Loving. He then worked in a number of TV series including The Simpsons, Biker Mice from Mars, Spin City, Oz, Windfall, and Community. Particularly, he is popular for his role in:

As of 2018, he is working in The CW’s teen drama series, Riverdale as Fred Andrews.

Perry made his movie debut in 1991 as Ray Ray from Scorchers. The following year, he worked in two movies, Terminal Bliss and Buffy the Vampire Slayer. In 1996, he worked in the movie, Normal Life with Ashley Judd, Kate Walsh, and Bruce Young.

Luke Perry has an estimated net worth of $10 million. Some of his hit movies include:

Perry earns a salary of $200k from the TV series, Riverdale.

Riverdale actor, Luke Perry, is a divorcee. Perry was married to his actress girlfriend,  Rachel Minnie Sharp. The couple met for the first time when Perry was one of the rising stars of the Hollywood. The couple eventually started dating and tied the knot on 20th November 1992 in a private ceremony.

The couple shares two children, Jack Perry and Sophie Perry. Their first child Jack was born on 15th June 1997 whereas their second child Sophie was born on 7th June 2000. In 2003, the pair divorced after living together for a decade. They share joint custody of their children.

After the divorce, Perry was rumored to be dating actress, Jennie Garth. They were speculated to be more than best friends by their fans. Later, Garth confirmed their relationship saying,

‘’ We're just really close friends. I love him so much, dating him might be weird!’’

In 2017, Perry was spotted with a brunette at the GLAAD Media Awards. They were holding hands and walked down together. The event was attended by famous personalities like Paris Jackson and Caitlyn Jenner. However, Perry has not revealed anything regarding his relationship with the lady.

In 2015, he underwent a colonoscopy which revealed precancerous growths. Later, he became an advocate for testing for colon cancers.

Here is the video where Luke Perry talks about his role in the TV series, Riverdale: