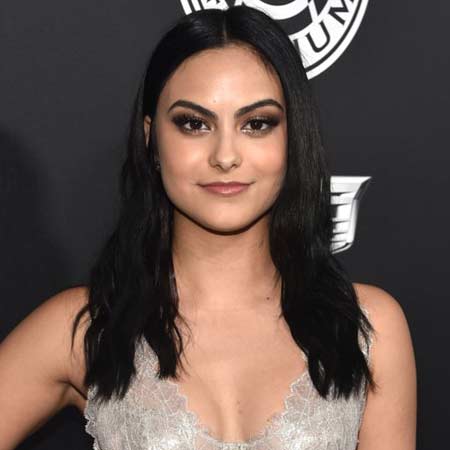 Camila Mendes is the rising American actress well recognized for her role as Veronica Lodge in The CW’s teen drama series, Riverdale. She made her Hollywood debut from the same TV series. Her acting in the series helped her to rise to the stardom. Also, her performance helped her to win Teen Choice Awards in the category of choice scene stealer.

As of 2018, she is working in Riverdale and two upcoming movies, The New Romantic 34 and The Stand-In.

Camila Mendes was born Camila Carraro Mendes on 29th June 1994 in Charlottesville, Virginia under the birth sign Cancer. Medes is American as per nationality and as far as her ethnicity is concerned, she is Mixed (Portuguese, Italian and Brazilian descent).

Mendes is the daughter of Brazilian parents, Victor and Gisele Mendes. Her parents raised her with her older sister, Kiara Moreno in Miami, Florida. When she was young she moved 16 times but spent most of her childhood in Florida. At the age of 10, she lived in Brazil for a year.

Mendes attended American Heritage School. She graduated from New York Tisch School of the Arts and in May 2016. While studying in Tisch, she took part in the Stonestreet Film Acting Conservatory.

Camila Mendes’s Career and Net Worth

Making her debut from the series, Riverdale, she shared the screen with KJ Apa, Lili Reinhart, Cole Sprouse, and Ashleigh Murray, among others.

As of 2018, she is working on her upcoming movies, The New Romantic 34 and The Stand-In.

Besides, she also appeared on the covers of MensHealth Magazine and Cosmopolitan (International fashion magazine for women).

As per Celebrity Net Worth, Camila Mendes has an estimated net worth of $3 million. The major source of her income is her acting career. She earns the salary of $600k from the TV series, Riverdale.

Camila Medes, the rising Riverdale actress, is working hard for being one of the successful actors. She has grabbed huge popularity and fan following from her works.

Mendes is in a long time relationship with her boyfriend, Ian Wallace. The couple started dating in 2013. In September 2016, she posted a picture on her Instagram captioning,

‘’Three Years with this charmer. Grateful for the endless inspiration and unconditional love that you give me. I love you so much, Ian Wallace, and I am lucky to fully experience just how rare and special you are. Happy Anniversary, love’’

Later, she removed the post and has not spoken about his boyfriend publicly. The couple has not confirmed their relationship.

Moreover, she was romantically linked to her Riverdale co-star, KJ Apa. But later, the couple confirmed that there is nothing between them.

Mendes is close to all the casts of Riverdale but especially with Lili Reinhart.

At some point, Mendes had an anxiety about food and an obsession with dieting. Her main goal was to be slim but after dealing with the eating disorder, she announced that she was done with the dieting and her obsession of being slim. She also posted a picture,

‘’Being #Donewith dieting is about naming the ways that dieting has harmed our mental and physical health.’’

Here is the short video describing the 8 facts about Camila Mendes: