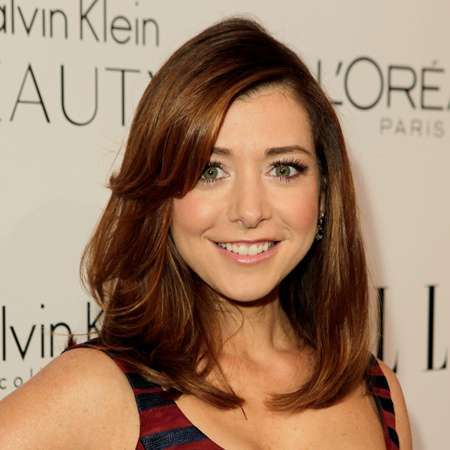 American actress Alyson Lee Hannigan was born on born March 24, 1974, in Washington D.C. as the only child of Emilie (Posner) Haas, a real estate agent, and Al Hannigan, a truck driver. She is most popular for known for her roles as Lily Aldrin on the CBS sitcom How I Met Your Mother. She is also known for her roles as Willow Rosenberg in the television series ‘Buffy the Vampire Slayer’ and Michelle Flaherty in the American Pie film series. She is married to Alexis Denisof and has two daughters.

Alyson Lee Hannigan is of mixed ethnicity as her father is of Irish ancestry and mother is Jewish. She was raised mostly by her mother in Atlanta, Georgia as her parents divorced when she was two. She began appearing in commercials at the age of four and moved to Hollywood, California at the age of eleven. She attended North Hollywood High School, while auditioning for various agents, and graduated in 1992.

Alyson Hannigan then got enrolled in California State University, Northridge and earned a degree in psychology. She was a clarinet player in junior high school and played soccer until she got an injury in her early teens. Hannigan has red hair and has a tattoo of tribal dolphins on her ankle, a Japanese kanji (for luck and happiness) on her back, and a cartoon turtle on her left foot.

Alyson Hannigan’s first film role was in Impure Thoughts as Patty Stubbs in 1986. In 1988, she got her first major role in film in ‘My Stepmother Is an Alien’ as Jessie Mills. After that, she got roles in numerous television series like Free Spirit, Roseanne, Switched at Birth, Almost Home, Picket fences, etc, before landing a major role in ‘Buffy the Vampire Slayer’ as Willow Rosenberg in 144 episodes.

The show was a hit and Hannigan gained recognition, subsequently appearing in several films aimed at teenage audiences. Her major role in film was as Michelle Flaherty in the first three and the last movies in the ‘American Pie’ series. In the films, she plays the boyfriend and later the husband of Jim Levenstein, played by Jason Biggs.

Alyson Hannigan also made small appearances in numerous TV series like 100 Deeds for Eddie McDowd, The Wild Thornberrys, Angel, Rugrats, That '70s Show, King of the Hill, Veronica Mars, etc. In 2005, she got the role of Lily Aldrin, one of the six protagonists of the CBS hit sitcom ‘How I Met Your Mother’. She remained on the show for its entire nine-season run until 2014. After earning immense fame through her cheerful character, she made a guest appearance in 'Gordon Ramsay: Cookalong Live'. She also lent her voices to numerous animated shows, such as The Goode Family, The Simpsons, Robot Chicken and American Dad.

She has also starred on the supernatural series, Buffy the Vampire Slayer, on which she appeared alongside Sarah Michelle Gellar, Nicholas Brendon, Mercedes McNab and Charisma Carpenter.

Alyson Hannigan has been nominated for various awards many times. She has won five awards altogether, Young Hollywood award in 2000 as Best Ensemble Cast for American Pie, Saturn Award in 2002 as Best Supporting Actress on Television for Buffy the Vampire Slayer, Teen Choice Award as Choice TV Sidekick for Buffy the Vampire Slayer, and two People’s Choice Awards as Favorite TV Comedy Actress for How I Met Your Mother in 2009 and 2012. Alyson Hannigan currently has an estimated net worth of 18 million dollars.