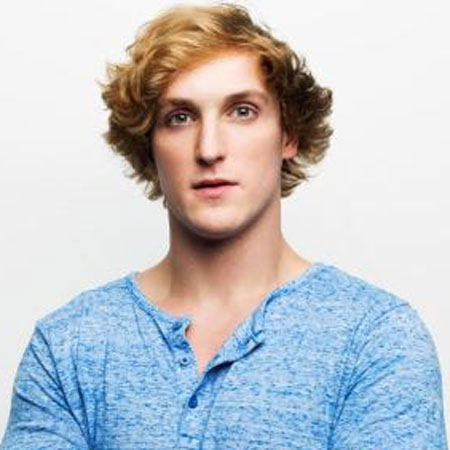 Logan Paul is an American YouTube personality and actor. He is a former Vine star who has appeared in several movies and TV series including Law & Order, Walk the Prank, and Foursome.

He initially rose to fame through the former social media app Vine in 2013. Paul then moved to YouTube and earned a huge audience within a short period. He is a native of Ohio and left his engineering degree in a final year to pursue his social media career in 2014.

Paul is considered one of the popular and richest YouTubers in the World. After his success with YouTube, he appeared in several TV series and other projects. Paul has also been a part of controversy several times. As of August 2018, he is dating fellow actress Chloe Bennet.

Logan’s nationality is American and he belongs to mixed descent; English, Irish, Scottish, Welsh, and Jewish. His star sign is Aries. He attended Westlake High School and played high school level football for the school.

After completing his high school degree, he joined Ohio University. Before leaving college, he studied industrial engineering. He left the college in 2014 and moved to Los Angeles to pursue a career in social media. He has a sibling brother named Jake Paul. He is also a social media and internet celebrity.

Logan Paul started creating internet videos at the age of 10 for the YouTube channel Zoo. Paul rose to fame after sharing his videos on video sharing service Vine. In February 2014, he had over 3.1 million followers on various social media platforms. In 2015, he was named as the 10th most influential figure on Vine.

Logan's six-second videos earned thousands of advertising revenue. Later, he began compiling his vines and began uploading them on his YouTube Channel. After shutting down Vine, he moved to YouTube as a full-time entertainer.

His channel Logan Paul is one of the most subscribed channels in the world. His channel has over 18 million subscribers and 3.8 billion + video views as of August 2018. He uploads short films, sketches, and daily vlogs on his channel. In 2016, he appeared in the YouTube Red movie The Thinning opposite Peyton List. From 2016-17, he appeared in a web series Foursome on YouTube Red.

Television and Other Projects

Logan has been featured in several commercials for the brands like Hanes, HBO, and Pepsi. Recently Logan purchased a short-form digital TV series Logan Paul Vs.

The same year, he released his first non-album single Help ME Helo You featuring Why Don’t We which earned RIIA Platinum and MC Gold certificate.

In 2016, Logan appeared in the adventure, science fiction, and thriller film The Thinning alongside Peyton List, Lia Marie Johnson, Calum Worthy, etc. The same year he also got a chance to work in the American comedy series Bizaardvark and Stitchers.

Logan’s other major television roles include Airplane Mode, Where's the Money?, Linked In, and more. Logan is currently busy in the shooting of Undying.

On 23 November 2017, Logan Paul released his new single Handlebars- a track based heavily around an interpolated sample of the song Handlebars by the American hip hop group Flobots. The song was heavily criticized for its perceived sexual objectification of women. In one of his music video scenes, he rides several women like a bicycle.

Following the vocalist of Flobots, Jamie Laurie commented sexist lyrical content of the song and unauthorized use of the sample. But, Paul did not respond to his backlash comments. Later, he deleted the song from YouTube.

After a month, On 31 December 2017, he uploaded a vlog to his channel depicting the recently deceased corpse of a man who had committed suicide by hanging in Aokigahara at the base of Mount Fiji in Japan, popularly known as suicide forest due to its infamy as a suicide site. The video garnered 6.3 million views within 24 hours.

Paul’s video was criticized by celebrities and politicians, and other members of the YouTube community accused him of being insensitive to suicide victims. A number of politicians made to Change.org urging YouTube to delete his YouTube channel, the largest campaign which received over 500 signatures as of January 2018.

After the controversy, he removed the video from his YouTube channel and uploaded an apology video on his channel. In his video, he said that his intention was not to mock the victim and his actions were irresponsible.

In January 2009, YouTube issued a statement via Twitter condemning Paul’s video. In the series of the Tweets, they said,

It's taken us a long time to respond, but we've been listening to everything you've been saying. We know that the actions of one creator can affect the entire community, so we'll have more to share soon on steps we're taking to ensure a video like this is never circulated again.

The following day, YouTube announced they were removing his channels from Google Preferred, its preferred ad program. After a month of Hiatus, he returned to his daily vlogs on 4 February 2018.

After the controversy, a brand for children and junior Maverick threatened him with legal action for giving his clothing line a similar name (Maverick by Logan Paul) which declined in sales of his clothing line.

In February 2018, YouTube suspended all advertising on his channel due to his pattern of behavior. The YouTube announced his temporary suspension after making a joke about participating in the Tide Pod challenge, removed an ill fish from his pond to jokingly give it CPR, and tasered two dead rats. Due to ad suspension, his more than a million dollars a month was halted for some time.

Logan Paul is one of the richest YouTubers in the World. He earns a hefty amount of net worth from his social media entertainment career. According to the Celebrity Net Worth, her net worth is $14 million, as of August 2018. He earns over $10 million a year through his numerous endeavors.

According to Forbes, he earned $12.5 million only in 2017. He makes $150K per Facebook post and $80K for each sponsored content on his Instagram. In February 2018, he lost over $1 million due to temporary suspension from ad revenue on YouTube. He also receives money from TV series and films.

He lives in a lavish home in Los Angeles. He bought the house for $6.5 million in October 2017. The house features five bedrooms, seven bathrooms and a wine cellar, four fireplaces, and a massive island. He has a collection of several lavishes cars including:

After his suicide video controversy, he talked to several humanitarians who work for suicide prevention. He also donated $1 million to suicide prevention agencies, with a quarter of the proceeds going to the National Suicide Prevention Lifeline. He has also raised funds for several charities throughout the years.

Logan Paul is dating Chloe Bennet for nearly a year. He made headlines when he was allegedly dating American actress Chloe Bennet in 2017. Following the allegation, the couple made their first public appearance in Beverly Hills, California, and confirmed their relationship.

Paul and Bennet were good friends before falling for one another. She stayed by his side on his suicide video controversy. The pair, however, keeps their relationship on a low profile and occasionally shows their love for one another. Previously, he dated a few girls.

In 2015, Paul was in a relationship with Jessica Serfaty. She featured in several of his videos which he uploaded on his YouTube and Vine. Paul dated her for a year and they were enjoying their relationship very much. Unfortunately, they didn’t work and the duo broke up after a year.

After separating from her, he dated Vine star and model Amanda Cerny back in 2016. The duo never openly addressed his relationship in the mainstream media, hence the reason for their separation is unknown to the fans. But, they still collaborate with one another video.

Then, he reportedly dated another internet celebrity, Alissa Violet. He also made several videos with her. But, she was in a relationship with his brother Jake Paul. Jake even accused her of cheating on him with his brother. He was also linked to several popular celebrities like Lele Pons, Peyton List, Teala Dunn, and Chantel Jeffries. Logan has also been followed on Twitter by millions of his fans and he is also active on Instagram.