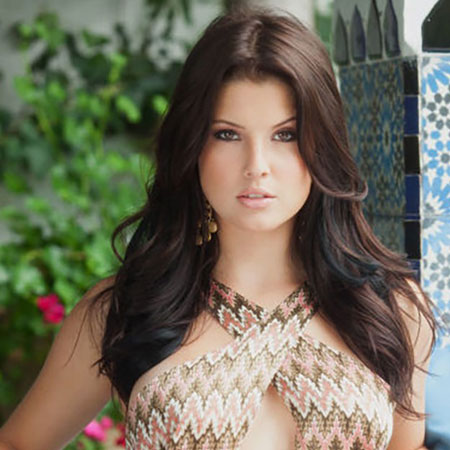 Amanda Cerny, a model, and YouTube star are popular for her YouTube Vlogs. She is a former Playboy Playmate of the month of October in 2011. Amanda Cerny is one of the popular Social media sensations in America. Her channel Amanda Cerny has over 2.3 million-plus subscribers as of June 2018. She has made several comedy sketches with fellow YouTube stars like King Bach, Logan Paul, and Juanpa Zurita.  She has also made a guest appearance in few movies and TV series including The Bet and Hello Ladies. In 2018, she appeared in an action-drama film 211 starring Nicolas Cage, Sophie Skelton, and Michael Rainey Jr.

Amanda Rachelle Cerny was born on 26 June 1991, in Pittsburgh, Pennsylvania, U.S.A. She has a sister named Samantha Cerny. During her childhood, Cerny has shifted to too many places. She is of White-American ethnicity and holds American nationality.

She lived in five different states by the age of eight, later the family settled in Florida permanently. Amanda also received a black belt in karate by the age of eleven and enrolled in her sporting efforts towards the track team in high school.

After she received high grades in her high school, Cerny joined Florida State University to study International Affairs. Later, Amanda became interested in working for Playboy after she saw the picture of Miss October 2008.

After her graduation from high school and the start of her University, Cerny started sending photos to the editorial team at Playboy.

During her junior year at University, Cerny was invited from the Mansion to come and visit and performed a test shoot. This led her to be chosen as Miss October 2011, and she got dropped out of university and moved to LA.

Amanda came into the limelight in the Vine Community along with her best friend and fellow social media stars  Lele Pons. One of her most popular videos is '5 Rules Eating Banana.'

Cerny also appears in movies and TV series. In 2013, she made a guest appearance in a TV series Hello Ladies. In 2016, she appeared in several episodes of a TV show, Adam Devine’s House Party. She then featured in 2016’s TV series The Deleted. In 2018, she featured in an action-drama film 211 alongside Nicolas Cage, Sophie Skelton, Michael Rainey Jr., and other stars.

Amanda Cerny earns a decent amount of money from her successful career as an American model, fitness professional, and television personality. She earns from her videos on YouTube. Her estimated net worth is $8 million, according to Celebrity Net Worth as of 2019.

Cerny runs two YouTube channels and has a total of over 2.79 million subscribers, as of 2019. On average, her videos receive over 400K views on YouTube. Generally, YouTube stars can earn $5 per 1000 monetized views on the site.

And 40-60% of their total video views can be monetized. On the basis of this calculation, she earns nearly $50K annually. Besides, she has also been running another successful YouTube channel AmandaCernyVlogs which has over 1.273 million subscribers as of 2019.

Amanda Cerny has supported numerous charitable causes throughout these years. In 2010, she lent her time to help those less fortunate in Haiti and eventually started her own non-profit organization called the Play Foundation.
In 2015, she was part of the Charitable organization ChangUr, a charity that helps to raise funds for needy children.

Amanda Cerny is an unmarried woman. Cerny is dating fellow YouTuber Johannes Bartl for several months. The duo is happy in their relationship.

They have appeared in several funny videos together. Cerny shares various pictures of her and him via her Instagram. An Instagram star regularly shares her intimate relationship with her boyfriend on her Instagram.

She previously linked to fellow YouTuber Logan Paul. The couple allegedly dating one year, as they can be seen together in videos. However, they did not reveal their affair publicly.

Before that, she was in relation to King Bach. The couple dated back in 2015, as she also made videos with him. The couple was considered the hottest internet couple. After they dated for some time, the couple got separated without any specific reasons.

Both of them moved on, as King Bach began dating Liane Valenzuela, whereas, Amanda dated the popular star Justin Beiber for a few months. The news went viral on the internet about their relationship after Justin Bieber separated from his on and off girlfriend Selena Gomez.

Cerny and Bieber's relationship did not go for a long time as they decided to break up making another headline. Later, Bieber rekindled his romance with Gomez.

In the year 2011, Amanda dated the comedian-actor Dane Cook (her first boyfriend). Their relationship became public when her boyfriend posted their photo while spending their time in Hawaii. Cerny also has a pet dog. Cerny is fond of traveling, she has traveled to different parts of the world.

There is also a rumor about her plastic surgery but it is yet to be confirmed by Amanda.

Amanda Cerny'sAge, Height, And Other Facts

Here are the five interesting facts about Cerny you must watch.