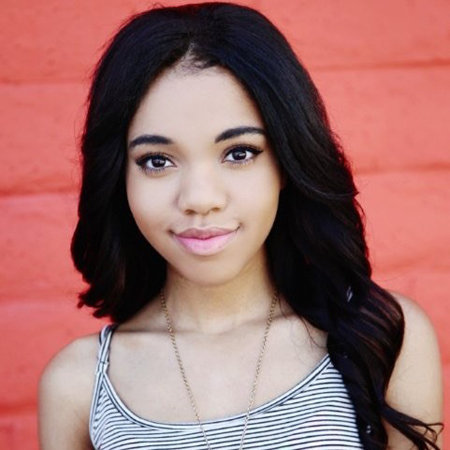 Teala Dunn is an American actress, YouTube as well as social media personality, known for starring in various TV shows and movies.

Dunn is also the winner of Young Artist Awards for Best Performance in a TV Series (Comedy or Drama) Supporting Young Actress.

Teala Dunn was born on December 8, 1996, in New Jersey, United States of America. She is an American and is of black ethnicity. Dunn was raised in New Jersey by her parents along with her older sister who now serves in the Navy.

Teala Dunn wanted to become an actress from very small age. She made her TV debut in 2002 as Nina in the TV show Law and Order: Special Victims Unit. Dunn’s acting skills and performances were appreciated by many people all around the world. She was able to gain attention from different directors and producers.

Dunn made her screen debut playing the role of Little Girl in the movie Transamerica in 2005. The movie was a massive hit and able to gain name and fame all around the world. She played the role of Cherise in the television series Queens Supreme in the year 2007. In the same year, she appeared in the movie, Enchanted as the voice of Bunny.

From 2007 to 2009, she worked in the television series, The Naked Brothers Band playing the character of Juanita. The series was a huge hit and became one of the most-watched series all around the world.Dunn appeared in the Expelled as Emily in the year 2014. Her first collection The Wonder Pets released on the tenth of April 2007. She featured in two episodes of the series, Dog with a Blog playing the role of Dab in 2013 and 2015.

Teala Dunn is currently single. Previously, she had affairs with many celebrities including American actor, William Brent, the relationship lasted only for a month, from Feb 2014 to Mar 2014.

Later, Dunna dated model NoahTeicher in 2015. She was also romantically linked up with model Alex Valley but they split up because her boyfriend was caught dating Sara Henrietta. on the side,

Dunna has managed to earn good amount of salary and made her net worth quite impressive. Teala Dunna is worth at least $1 million.