Listed Second On Forbes' Highest Paid Wrestler In 2017, How Much Is John Cena's Current Net Worth? 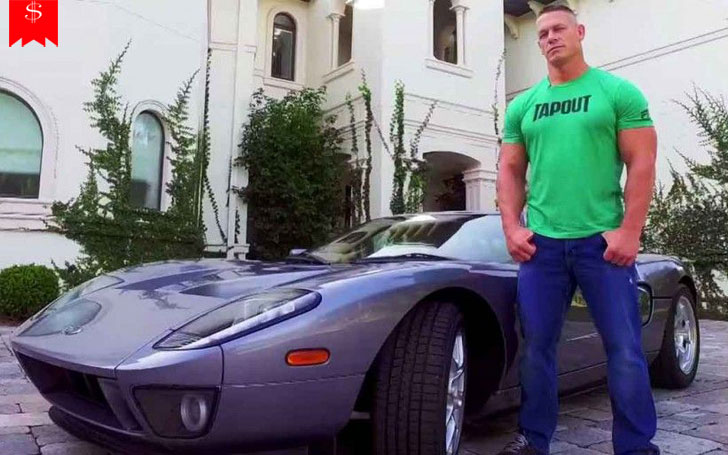 John Cena is undoubtedly one of the most popular professional wrestlers of the present generation. Throughout his 18 years of career, Cena has earned not only fame but also has accumulated hefty amount in his bankroll.

His names not only popular in the wrestling arena but also in Hollywood films. He has acted in several movies from Hollywood to date.

How much has Cena earned from his career? What is his net worth? We have all details about the WWE star's lifestyle and assets here.

How Much Is John Cena's Net Worth?

John Cena's estimated net worth is $55 million, according to Celebrity Net Worth, as of 2018. He is currently a free agent and performs for both Raw and SmackDown brands

The 40-year-old earned such an impressive net worth from his career as a wrestler, actor, rapper, and media personality.

Also Read: Find out the net worth of John Cena, the WWE Superstar, along with his WWE career...

Sources claims, Cena's estimated net worth in 2016 was $35 million with annual earnings of $9 million. Cena's salary became $8 million in 2017 making him the second highest paid wrestler after Brock Lensar with earning of $12 million.

He then moved to WWE in 2001 and since then he enjoyed his wrestling career, being one of the renowned and successful professional wrestlers.

Furthermore, he also appeared in several television shows including Jimmy Kimmel Live, Late Night with Conan O'Brien, Extreme Makeover: Home Edition, Saturday Night Live and many more. As of now, the average grossing for his movies is $52,308,260.

He also has a multi-million endorsement contract with several brands like Gold's Gym, Gillette, YJ Stinger, Subway, Capri Sun and Fruity Pebbles among others. If you believe a source, Cena added all together $5 million to his net worth from the endorsement.

Moreover, his musical career also helped Cena to increase his net worth. His debut album in 2005, You Can't See Me, was warmly received by audiences and was also ranked #15 on the U.S. Billboard 200 chart. He also featured on two songs All Day and Breaks with rapper Wiz Khalifa in 2014.

He also is five times United States Champion, three-time Superstar of the Year Slammy Award winner in 2009, 2010, and 2012. He was also awarded Chris Greicius Celebrity Award in 2009.

Where does John Cena reside? His Lifestyle and Assets Details

Cena resides in his stunning mansion in Tampa, Florida. He previously lived there with his former fiancee Nikki Bella. The Tennessee estate has a stunning indoor pool, ivy-themed kitchen, an enormous gym, a piano downstairs, and a huge balcony.

He bought the house for $3.4 million. He also has a $437300 mansion in New Westbury. Cena also has two lucrative watches Girard Perregaux BMX Laureato- price $6395 each.

Also Read: John Cena Proposed Nikki Bella At WrestleMania. Was It A Real Proposal Or Part Of The Script?

John Cena resides in his stunning mansion in Tampa, Florida with his fiancee Nikki Bella

He is quite fond of cars as he has quite a collection. He owns a luxurious Maserati, the starting price is $73,050.

In December 2017, Ford sued Cena for selling his custom-made model Ford GT sports car in U.S. District Court in Michigan for violating a contract with the company.

As per lawsuit, the WWE star was "selected from thousands of applicants for the opportunity to purchase the Ford GT" and Cena also signed a contract to have the car for at least 2 years.

The representative of Ford said at the time:

Mr. Cena has unfairly made a large profit from the unauthorized resale flip of the vehicle, and Ford has suffered additional damages and losses, including, but not limited to, loss of brand value, ambassador activity, and customer goodwill due to the improper sale.

The company also claimed that Cena sold the car for a big profit and claimed for all the profit he earned by selling the car.

Apart from wrestling, Cena is also known for his generosity as he has been involved in several charity events. Most notably for his involvement with the non-profit organization, Make-A-Wish Foundation. The wrestling star provided over 500 wishes for children suffering from life-threatening illnesses via the organization.