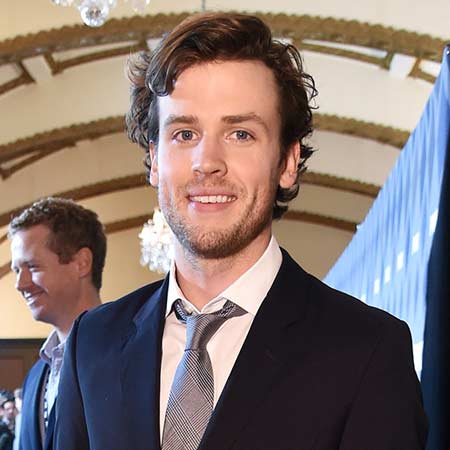 Jack Cutmore-Scott is the rising English actor who is famously known for his role as Cameron Black in the ABC drama series, Deception. He is working hard to become one of the successful actors in the industry. He made his big-screen debut in 2014 appearing in the movie Kingsman: The Secret Service and debuted on TV from Cabot College.

During the initial phase of his career, the actor appeared in several theater productions. He also won awards like Lee Patrick Award for Drama and Louis Sudler Prize in Arts.

Jack Cutmore-Scott was born on 16th April 1987 in London, England. Cutmore-Scott is Aries which defines his personality to be upbeat and magnetic. He is British by nationality and belongs to Caucasian ethnicity/race.

Cutmore-Scott graduated from Harvard University. While studying in the University, he performed in 14 stage productions. He also won two awards: Lee Patrick Award for Drama and Louis Sudler Prize in the Arts from the university.

In 2010, Cutmore-Scott made his professional stage debut in Boston Public Theater’s production of Entertaining Mr. Sloane.

Jack Cutmore-Scott made his movie debut in 2014 from the action soy comedy film, Kingsman: The Secret directed by Mathew Vaughn. In 2017, he appeared in a war film, Dunkirk by Christopher Nolan. The same year, he shared the screen with Lili Simmons, Christine Donlon, Noureen DeWulf and Brandon Scott in the thriller film, Bad Match.

Cutmore-Scott made his TV debut in 2014 as Charlie Deckard in the TV movie, Cabot College. He then worked in The Go-Between and Cooper Barrett’s Guide to Surviving Life.

He, however, is popular for his role as Cameron & Jonathan Black (identical twins) in the ABC’s crime procedural drama TV series, Deception. He shared the screen with IIfenesh Hadera, Lenora Crichlow, and Amaury Nolasco. He is a s sociated in the series since 2018 and about his character in the series, he plays the role of a Las Vegas illusionist who works with FBI to solve crimes.

Jack Cutmore-Scott has an estimated six-figure net worth, but, the amount is not made official yet and is still under review. Cutmore-Scott worked in some movies that made an impressive collection at the box office. Some of them include

His major source of income is his acting career.

The talented actor, Jack Cutmore-Scott is yet to get married. Cutmore-Scott is more into developing his career as an actor rather than involving in any serious relationship and love affairs. He is close with his fellow cast members from Deception.

Besides, Cutmore-Scott was linked to his fellow cast member from Cooper Barrett’s Guide to Surviving Life, Meaghan Rath. She is a talented Canadian film and TV actress best known for her role in the Syfy series Being Human. The couple often posts pictures together on their social media, however, has not revealed anything regarding their relationship.

@meaghanrath who? I'm busy trying not to sneeze. #cooperbarrett #TCA

In his spare time, he loves to travel and enjoys hanging out with his friends.

Here is the video where Jack Cutmore-Scott talks about his career: